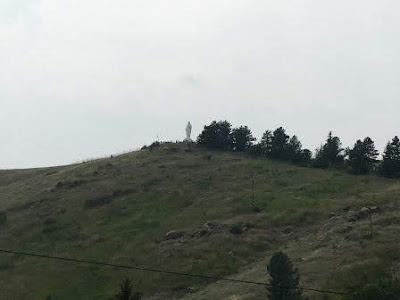 Getting settled into the new altitude and time zone, we got up and were functional enough for me to make eggs for Anabelle and settle into our usual breakfast routine.

Titi Luzma started watching Ant Man but left in the middle.  This was a common tactic she used to watch movies, explaining why she asked for spoilers throughout the opening acts.

She left to take Abuelita to her toenail appointment, leaving us to explore.  We originally thought all of us were attending the Spanish mass at the Mother Cabrini shrine, but with foot requirements, we visited it only to sight-see, planning to meet up with them later at evening mass. 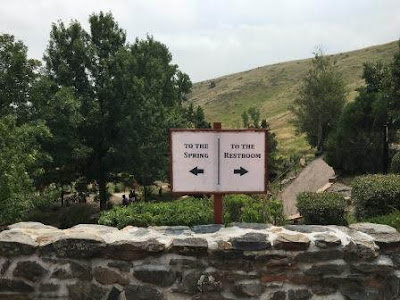 We got there, and looked around the holy gift shop.  I waited on line for the holy rest room, realizing timing the visit just as mass let out when we weren’t attending was probably a planning faux pas.

We knew there were over three hundred and fifty steps, but it’s hard to count in the thin Denver air. 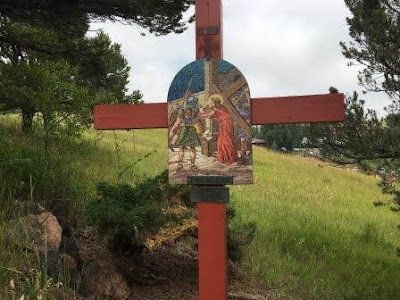 Every so many steps, one of the Stations of the Cross was posted.  Once we passed the final one, and the bonus, “Happy resurrected Jesus” one, I figured we were near the top. 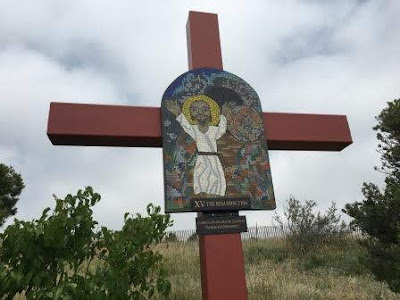 Then we passed the first Sorrowful Mystery and I blurted out some expletives that should have sent me to the confessional back in the chapel at the bottom of the hill. 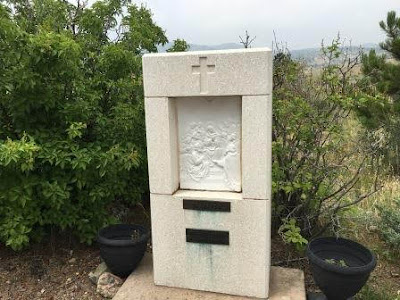 Hiking up past the rest of those, and knowing the glorious and nifty mysteries were due, did not improve my mood.  Yes, someone reminded me it was the “joyful” mysteries once we reached them. 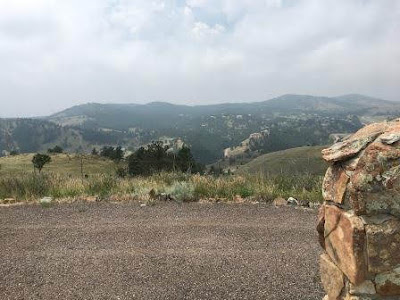 Up at the top, along with the shrine itself were stone reliefs of the Ten Commandments… 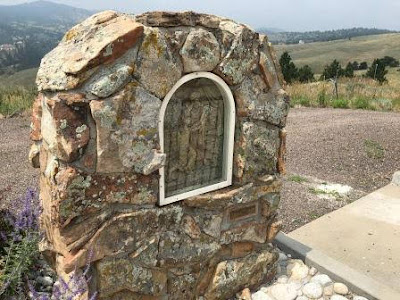 There were eleven of them.

When we saw one was a depiction of Moses receiving the commandments, we could start trying to figure out the other reliefs. “Thou shalt not kill” was pretty obvious, “Thou shalt not commit adultery” was completely vague, and the rest were variations of confusing and oblique that Anabelle found hilarious. A series of stones in the shape of the Sacred Heart lie over where Mother Cabrini was buried.  It was covered by a glass enclosure for protection, which people threw coins on because they’re idiots.

The sealed shrine also had money somehow stuffed into it. This was also odd, as there were multiple collection boxes and candles down in the chapel at the base of the stairs.  I guess the faithful were hoping Mother Cabrini herself would pocket the cash this way. 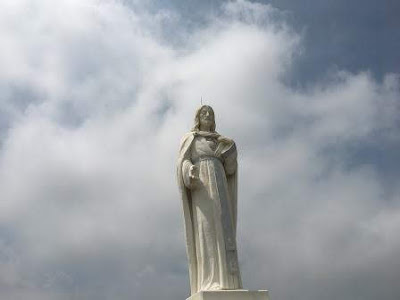 In the center of the area atop the mountain was a massive statue of Jesus up on a raised platform. It took me a while to realize that he was not an “Electric Jesus” but the wire down his back was actually connected to a lightning rod. Frankly if you need to take precautions against your savior being struck by lightning, perhaps your faith or your shrine location planing skills are not as strong as it should be.

Anabelle overheard some kids reading the Ten Commandments stones and learned one’s name was Damien. This made her feel better about wearing her Ankh necklace to the shrine.

We couldn’t figure out why Rosa was ignoring us on the way down, until we reached the bottom and she said, “Three Hundred and Seventy Five!”

The total count was Three-Eighty-Four with the extra flight down to the Holy Water drinking fountains. 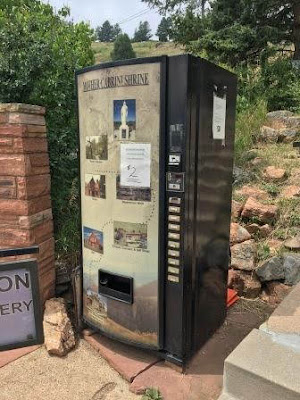 We filled some bottles and had a sip out of the paper cups provided.  Rosa insisted on tossing some on Anabelle and me. As she surprised us with this, we were a little stunned.  However, we did decide our “drink and douse” blessings were far classier than the group of teenagers performing the “sacred chug and burp.” 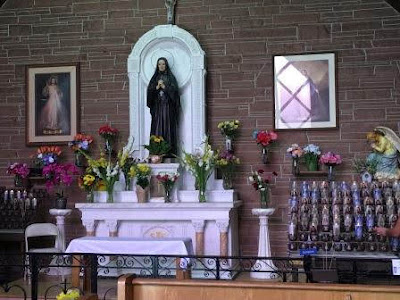 Stopping in the chapel, we lit a few candles of various sizes, before heading back to the holy gift shop for some holy ice cream. 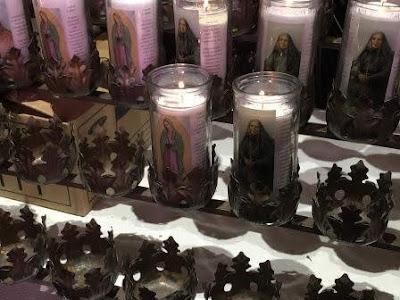 To work the Sunday crowd, local nurses had a blood pressure station out front.  I tried it out to see the effects the thin air and multi-story climb had. I probably should have mentioned the blood pressure pills newly added to my regimen.  While the pressure was elevated to just barely borderline by the hike, my heart rate had returned to my medication de-augmented, frequent exercising levels of the mid-forties by the time I sat there a while.  I think their pressures spiked before I could explain about the pills, but everyone calmed down quickly enough. 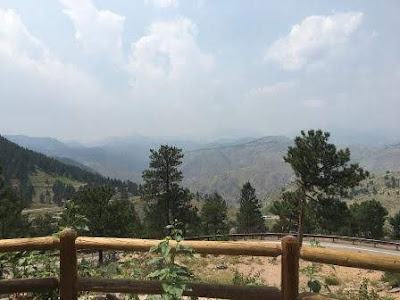 We didn't care about seeing the museum again, but the proximity led us to the giant (if less holy) gift shop and cafe of Buffalo Bill’s Pashka Teepee. Since buffalo tends to be leaner and hence blander, they must all know how to spice it well out west, because it’s phenomenal everywhere. With them insisting on making burgers all well done, Rosa was the only one that had one. I had the chili, and Anabelle went for the chili dog. 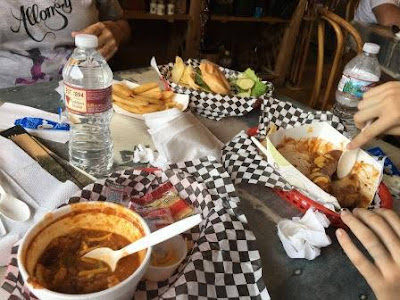 After enjoying varieties of bison, we wanted to see some.  We programmed in the “buffalo overlook” and let Siri lead us to the local herd.

That was the plan, anyway. 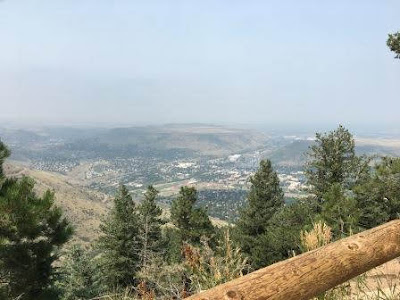 In another case of evidence that there were going to be some GPS issues, Siri led us on a long and climbing twisty dirt road adventure that overlooked many a wooded valley, and many a driveway I thank any deity willing to listen that I don’t have to clear snow off of, but not a single bison.

Anabelle passed out when we got home, still not accustomed to the new time.  We got ready, followed Titi’s example and got to the local church a half hour early. 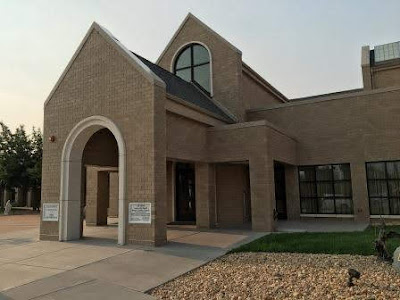 We were immediately asked to bring up the gifts, which is one of the main reasons I try to show up late to mass.

Like our previous visits, there was some culture shock. It's a much more protestant vibe than New York area churches.

It was huge, they used happy modern songs, the mikes were wireless and there was a massive sound board near the baptismal font.

The giant staring crucifix in the front was a definite Catholic element however.  It being flanked by weeping angels was a nice touch.

We were called back to get the gifts early on in the offertory section. By the time they lined up everyone,  collected the donations, and double checked the sound board,  my hands had cramped up on the chalices and I feared I’d be unable to release them.  In my relief at not flinging the host all over the altar, I forgot to wait for everyone to unload then be blessed and released back to my seat.

The retired priest ending the mass with a speech about the recent molestation revelations in Pennsylvania was done in completely veiled and referential terms making it far creepier than it needed to be. We briefly stopped in this holy gift shop, because of course they had one, and went home.

Titi Luzma had to do her translation work, which she did from home.  We went over to the pool and initiated and continued several traditions for the trip.

She swam a bit in the main pool before joining Rosa in the hot tub.  Then I soaked my feet and/ or knees while being ordered to hit them with an unending series of Disney World trivia questions.

We continued the trivia downstairs until Titi was done, then had leftovers and roast chicken for dinner. Titi introduced us to her smoothies, which were a highlight of the vacation.

We ended up watching Goosebumps as a way of answering Titi’s requests to see horror movies, now that she knew Anabelle liked them.

Her interest in,  and her knowledge of our fandom of, superheroes also led her to asking, “What’s Deadpool?” but Anabelle wisely slapped the remote out of her hand with a firm, “No!” before she could hit play.