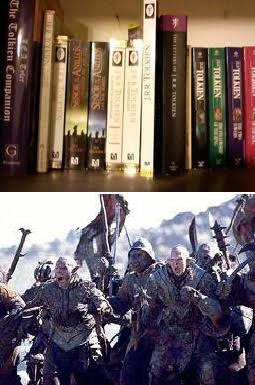 I have read the Lord of the Rings many times over the years.  My copies are dated 1984 and I know I read it from the library before that.  The Hobbit, I read back in elementary school, even predating my Dungeons and Dragons obsession by a few years. (For reference, my first character was Gonzo the Halfling.)

So, again, I have read them.

I have reread them.

I have enjoyed them.

I have also read the Silmarillion and Unfinished Tales. (Though, ironically, I can't remember if I finished the latter.)

But having said all that…I definitely prefer the movies.

This is not normal for me. As into movies as I am (which multiple shelves of tapes, DVDs and blu rays can attest to), I am far more of a book person (which INSANELY MORE shelves of books can attest to).  There have been many occasions where I’ve been unable to enjoy what should be a very good film, simply because the idea of “different isn’t always wrong” (when it comes to changing the source material from a book) is hard to hold in my brain.  Heck, there have been multiple times where I’ve gone out and read a book after seeing a good coming attraction for a film based on it that I never quite get around to watching.

J. R. R. Tolkien created a vast and detailed world, populated with diverse and complex cultures, civilizations and legends.  I firmly believe no one else has done better or worked on a grander scale.  I also firmly believe that if he created that world today, there’d be a hell of a lot more than a trilogy as the main story. We’d have scads of “Tales from Tolkien’s Middle Earth” books, games, posters, television specials, waffle irons…you name it, all written by other people.  As a world maker, the level of detail he infused into every level of his creation set him apart. As a writer, sometimes that level of detail slows down the story like a sunbathing troll on Quaaludes.

Peter Jackson’s films visually recreated the world, and then threw in a sweep to the narrative that carried it along.  When I’ve read the books, I’ve felt every page of their length as layer upon layer is piled on to add to the depth of Middle Earth.  The films, for me anyway, flew by. This is whether I watched them individually, all in a row (after knee surgery forced me to sit still for that long), or in bits on the innumerable TNT airings. (With the exception of the end of Fellowship of the Ring; showing that many waterfalls at the end of a three hour film with no bathroom intermission is cruel and unusual.)

Tolkien does infuse a sweeping narrative to his tales, but when a book stops for a full chapter to talk about the history and geography of a mountain in the distance during the action, there can be a slight interruption to the sweepyness.  In the movies, the heroes run by while the audience looks behind them and thinks, “Ooh, pretty mountain,” and the carnage of battle continues to rage on.

I fully admit that a large part of this is my fault.  Up until the movie releases, where I read each book after seeing the film, I always read the whole trilogy in a row.  Therefore, by the time I was on the third book, I just wanted the stupid ring gone, and had no patience for world shaping minutia.  I know I missed several plot elements due to drowning in details.  It took seeing them on screen to realize that Oliphants and a Mumakill were the same thing. You’d think giant elephants in a battle would be more noticeable than that. 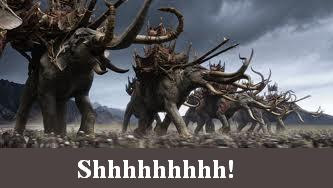 Missing the pachyderms was a trifle compared to never noticing that Aragorn’s replacement troops were an army of the dead, though. Perhaps I was rushing a tad.

The information overload can’t only be blamed on my desire to, “Burn the precious already!”  There’s so much back story of Middle Earth, and he spent so long creating and developing it all, it’s kind of a miracle he finished the books in the first place. Tolkien made the guy who translated Shakespeare into Klingon look sane. The man created entire languages (with sub branches, dialects and evolutions) for non existent races, and then created a detailed and extensive history and mythology for each race. He didn’t write novels, he created a fully realized universe, which the books act as a tiny window into, allowing an extremely dense view of that universe from a specific angle.  By choosing the right references, the movies surround you with that realm…the books have so much packed in they nearly smother you in it.

On the subject of densely packed writings, the Silmarillion must be addressed.  As mentioned, I read a ridiculous amount.  I’ve read some very complex and convoluted works: Robert Anton Wilson, Douglas Hofstadter, Fox in Sox (that tweedle beetle part is a nightmare).   I’ve read them, understood them, remembered quotes and incorporated philosophies from them. All of this was taken from the initial times through and then expanded upon when I reread them.  I’ve read the Silmarillion at least four times.  With the exception of the most recent try, where a few inklings of plot remained behind in my brain, I couldn’t tell you anything about the book after each reading…other than it contained an inordinate amount of elves, a variety of magic rocks, and far more names (in each language) for each character than I cared to remember.  Slogging through that book felt like having a vat of Middle Earth dumped on my head, and then being washed off with a fire hose before I could figure out what happened.  Even the last time through (where I was able to cling to some story from the superhighway of background information) I found myself having to reread an entire section when I figured out, only as it ended, that the main character in it was, in fact, a dog. 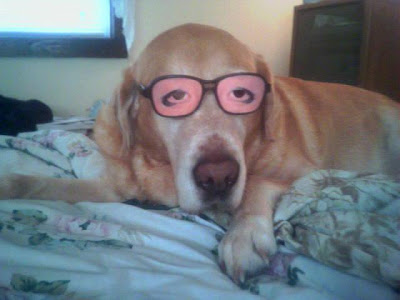 All this nigh impenetrable back story is the reason I am excited about the two new Hobbit movies planned. Tolkien’s writings are, in effect, the ultimate Series Bible for those trying to capture his world on camera. In order to stretch that children’s book into two films, they’ll have to start mining some of the depth that Tolkien had strewn voluminously throughout his other works and notes.  Based on the Lord of the Rings trilogy: the production crew involved is excellent at making visually stunning and emotionally engaging scenes out of those hidden histories.  If the Hobbit movies continue their string of successes, we may get even more Middle Earth stories mined form the whole range of his creation impressively displayed on the big screen…

And with all that material to choose from, there’s sure to be many legends far more engaging than the tale of a whiny little hairy footed dude who wouldn’t have been able to destroy the evil enchanted trinket unless his best bud was completely awesome. 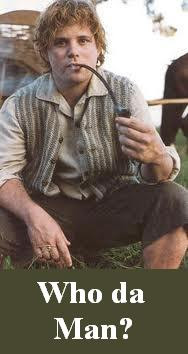 Click Here For a Look at Each Film Individually, Please
Posted by Jeff McGinley at 2:00 PM