Joe Village Two: Cobra Boogaloo
Or
Of Course it’s Christmassy…There are Hess Trucks
Additions: Space, an end table, Real American Hero Figures, and Hess Trucks…a quantum leap in time wasting.
This Battle Village is a four faction, two tiered affair.  The Joes are mounting an assault on a secret Cobra bunker atop a hidden plateau during an attempted coup which could bring about a Cobra civil war… 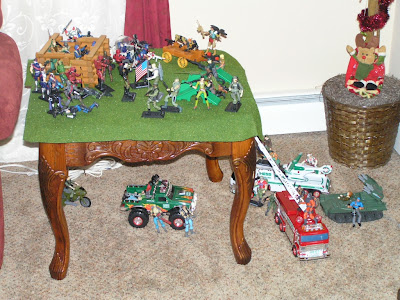 Or maybe it’s just a big pile of plastic toys; your mileage may vary.
A traitorous officer lured Cobra Commander to the bunker. Not only were Vipers loyal to Serpentor guarding the location, but Destro’s son, Alexander, was also on hand to pledge the support of the Iron Grenadiers to Serpentor’s side, in return for backing him as the head of the M.A.R.S. Corporation.
The Iron Grenadier accompanying Alexander reported this to Destro, who was angered at both his son’s insubordination, and his poor business sense. (An arms dealer can make much more by selling to both factions than by siding with one.)  Destro arranged for Intel to reach G. I. Joe headquarters about the location. His plan was to extricate his wayward son in the resulting chaos.  To insure they had time to escape both Cobra and G. I. Joe, he hired Zartan and the Dreadnoks to slow down the Joe’s attack. 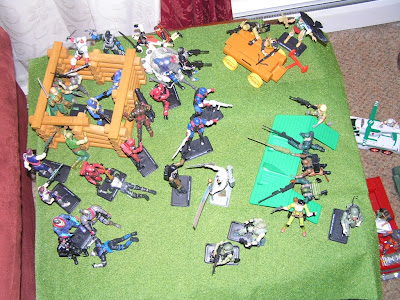 The scaling assault of the Joe team is not Serpentor’s most pressing problem, however.  He failed to take into account the loyalty and ruthless efficiency of Cobra Commanders elite guards. 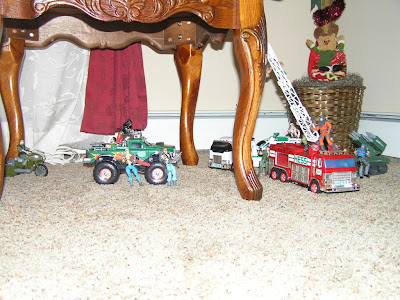 In the tunnels under the table…I mean plateau, Zartan and company are already running into problems, as they’re caught in crossfire between the G. I. Joe base camp, and Clutch on the RAM (RApid fire Motorcycle).  Although firing a 20mm Vulcan cannon on a sidecar would probably make it a RApid flipping Motorcycle.  However, we have no time for rational physics, there’s a war on. 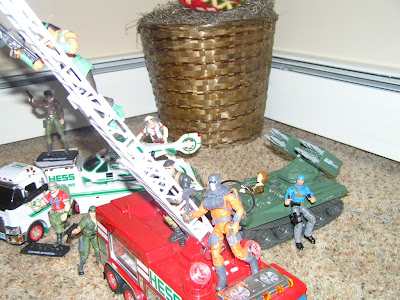 General Hawk oversees the base camp from the command vehicle as the troops climb the ladder of Barbecue’s fire truck.  Ace is running a preflight check on the helicopter, which will remain grounded until I open the two-pack with helicopter pilot Wild Bill in it. Bazooka and Grunt (who used to be Duke, but I found a much cooler one recently) supply the previously mentioned crossfire occupying Zartan and the boys.  Shipwreck is checking in on Cover Girl’s late arrival in the Wolverine missile tank.  Due to trademark issues with her name she had to take a detour through e-bay from 1983 to get here. Flint is ready to ascend the ladder following Numbchuck, Noonchuk, Neincheck, oh lets just call him Quick Kick, no wait, he’s dead, or is he back in the reboot?  How about we say he’s Billy from Predator and leave it at that? 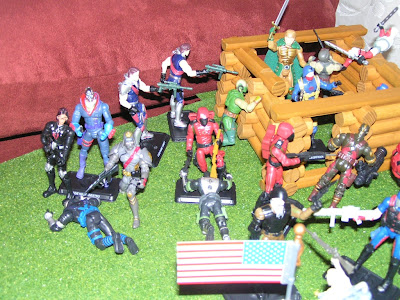 The Iron Grenadier who warned Destro has managed to connect with him and the Baroness after subduing Alexander.  As the battle moves their way, they will head out to find the escape craft previously hidden in the nearby mountains, which bear an uncanny resemblance to couch cushions. (Work with me here, people.)  Nearby, two of Cobra Commander’s elite Crimson Guards and their twin leaders have taken out several individuals loyal to Serpentor (who, like Alexander, are represented by Spy Troops figures, which are hideously incorrect, can’t stand on their own, or often, both.) 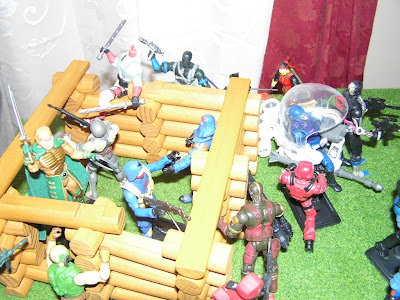 Inside the bunker itself, Serpentor is shocked when his personal Desert Viper guard gets sneak attacked by Storm Shadow, currently under Cobra Commander’s brainwashing (as the battle is on a Tuesday.)  The Commander is taking full advantage of this moment to explain to the traitorous officer the details of Cobra’s severance package.  In front of the bunker, the Cobra pilot Wild Weasel works feverishly to get the entirety of the Cobra air force in flight.  As Hess has unfairly decided to release neither an SR71 Blackbird, nor an A-10 Tank killer, the entire Cobra Air force consists of a single Trubble Bubble.  Two members of the Joe Advance Team can be seen next to the bunker as well.  Snake Eyes has, of course, headed straight to try to free his sword brother from Cobra’s thrall; by pointing an Uzi at his head apparently. (I really should have repositioned him.)  Meanwhile, his apprentice, Jinx has handily taken out Generic Cobra Ninja 57-B. 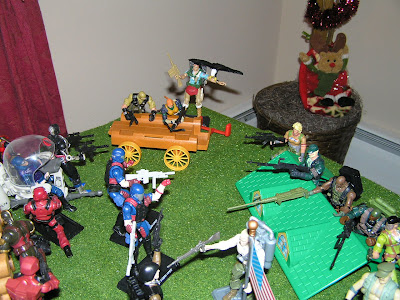 The Advance Force had mounted the plateau by unseen means (possibly by climbing the curtain).  The remainder is currently pinned down behind a Cobra ammunition transport that looks remarkably like a wooden wagon. (Again, work with me here.) The Battle Android Trooper leaning on…I mean protecting…the Trubble Bubble was supposed to be Snake Eyes target, which I’m sure he’ll get to once he’s fulfilled his mission quota of angst over Storm Shadow.  The Advance Team members here are Beach Head, Scarlett, and Spirit.  Spirit’s in the back. Did you notice the subtle hints that he’s an Indian?  (Braids, buckskin accessories, moccasin boots, big honking eagle on his arm) As if those weren’t enough, he’s been equipped with a rifle that shoots freakin’ ARROWS.  There may be such a thing as being too proud of one’s heritage. 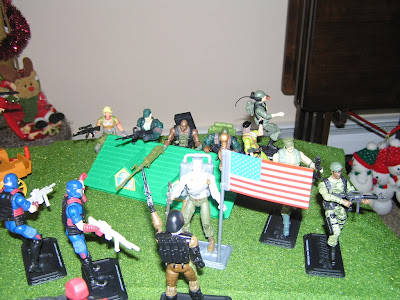 The few Vipers not caught up in the Cobra internal conflict have been rallied by Major Bludd to unsuccessfully try to hold back the main Joe attack.  They’ve run right into Duke after the First Sergeant’s impressive and patriotic landing via jetpack.  (See, much cooler.)  While Duke holds the snakes at bay, Sgt. Stalker and Gung Ho begin and end run to start the breakthrough.  Lady Jaye will be right behind them after telling Breaker to alert the base camp troops to push forward. (I’m starting to realize I may have put too much thought into this.)  On the opposite side of the… let’s be generous and call it a foxhole… Bombstrike is using her laser sight to spot for Cover Girl’s missile barrage; an interesting coincidence since I told my daughter to call her Cover Girl for several years because I thought I couldn’t get a real one.   Inside the foxhole (see, it works) heavy cover fire is provided by Roadblock, Heavy Duty (They may actually be the same person due to more weird Hasbro copyright problems.) and Rock and Roll.  Tonight the part of Rock and Roll will be played by a horrendously bad  Spy Troops Gung Ho figure who has received a new lease on life after a yellow paint job on his head and beard.
Will the Joe’s use this opportunity to stop Cobra once and for all?
Will the Commander use this opportunity to unify Cobra under his iron rule?
Will Serpentor use this opportunity to escape and rally his forces for another coup?
Will I use this opportunity to buy more useless crap and need a second table?
Will my wife use this opportunity to make me sleep in the garage?
Tune in next Christmas when you’ll know.
And knowing…is half the battle.
G. I. JOE!!!!!
Infinite thanx are due:
To my daughter, for putting up with some of her toys being hands off for a couple of weeks.
To my wife, for putting up with this, many other ridiculous things, and me in general.
Bonus shots.
While I was wasting time with mine, my daughter set up her own Christmas Battle Village. 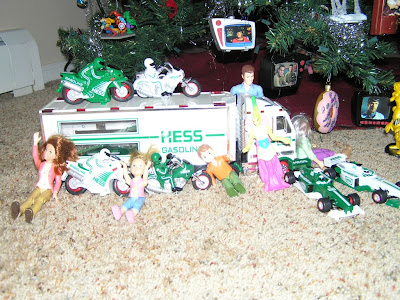 The Fisher Price Dollhouse people All Terrain Racing Team VS… 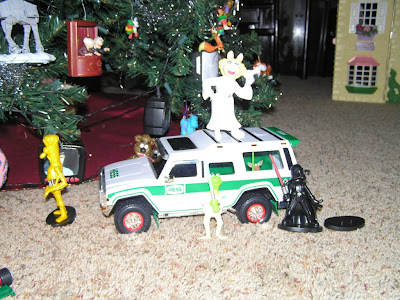 The Star Wars Muppets and the SUV of doom!
That’s my girl!
Posted by Jeff McGinley at 2:00 PM

Thanx. I really need to figure out how to add red and green laser bolts to make it more festive.