“Christmas Screams are Music to my Ears”
OR
“Among the Holidays, There is no Room for the Weak”

Additions: Not enough to generate a new story line. Only one stinkin’ new figure, plus this year’s HESS truck wasn’t usable.  I wanted to take a year off, re-do an old set up, post the old village stories, and get caught up on other writing ideas.
But Noooooooooooo!  Jason had to see me in the hallway and say, “I can’t wait to see this year’s battle!”  Insane hobbies can be a burden, sometimes. At least a closet avalanche exposed them from behind my mess allowing my wife to find the bag of stands this year. (Thanks Honey!) 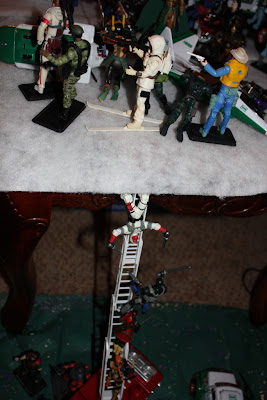 Things instantly start going badly for the Joes on, coincidentally, yet another “snow” covered plateau.  Their action has turned from an attack to a desperate rescue mission.  The entire Hiss Elimination Sky Strike Air Force (consisting of one helicopter and one jet) was taken out almost immediately.  Stalker is leading the rescue efforts of the two pilots; because the awesome comic book character got minimized in the cartoon, left out of the movie, and deserves a chance to shine.  He is aided by Snow Job (Really, Snow Job.) because he’d look ridiculous if I put his ski clad feet on the “grass”.  Wild Bill is helping to buy time by firing his pistols wildly (hence his name) at their assailants, while Ace puts his silly looking helmet to some use by wielding it as a blunt weapon.

The next batch of rescuers is going to be delayed however.  Thanks to a massive increase in Cobra technology, a long range Brain Wave Scanner has caused Storm Shadow to turn on his ninja allies mid climb.  (Either that or he learned he’s coming back in the movie sequel and wants to re-ally with the bad guys to avoid confusing the audience.)  Snake Eyes, Scarlett and Jinx are going to have to wait to learn what eliminated Joe air superiority. 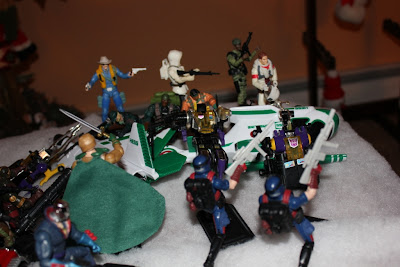 The enemies who brought down the aircraft are still pressing the Joes over the wreckage. Luckily Billy, Mac and Blain from Predator managed to get up the ladder before Storm Shadow flipped again.  While Destro working on something technologically insidious is nothing odd, the presence of Serpentor acting as a field general indicates a shift in Cobra command and control.  Neither the arms dealer nor the emperor brought down the Joe craft though. (I probably don’t have to mention that neither did the two Viper troopers doing their Al Jolson impressions…having stands can only help so much on “snow”.)  It is most definitely the giant robotic insects that have caused, and continue to cause, alarm in the Real American Heroes.  Perhaps there is more to this battle than meets the eye? 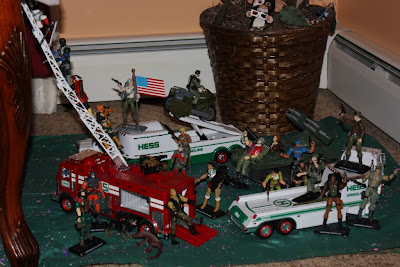 Thanks to yet another dump truckesque contribution from HESS this year, the assault once again starts on Barbecue’s fire truck.  Barbecue himself is in need of rescue this time, as Mutt and Junkyard try to rid the camp of the giant lizard that crops up in this thing every season without explanation.

Beachhead was part of the rescue mission atop the plateau, but has returned to escort the wounded Grunt to the sick bay in the back of the fire truck. (This is mostly because I had neither the energy, nor the patience to get those lousy Spy Troops figures to stand up anymore.)

Atop the fire truck sits more evidence that Cobra has something far more dangerous than usual up their sleeve.  The metal bird spying on the camp has been detected by Freedom – Spirit’s eagle friend.  Although his feathered ally had no difficulty spotting the impostor, Spirit’s weapon is completely ineffective against it. (This would be because Mr. Iron-knife thinks it’s a good idea to stick clips of arrows larger than the barrel into his rifle…very likely it is ineffective against most things.)  Fortunately, Flash and his laser rifle were remaindered to a local “Five and Under” store, meaning Buzzsaw may get his Cybertronian tail feathers singed anyway (Yes, it Is Buzzsaw.  Laserbeak got more TV time, but was sold separately.  Now you know, and knowing…oh wait, that’s the other cartoon.)

In order to provide assistance as quickly as possible, Duke is getting ready to jetpack into the fray.  Clutch is planning a similar mission by firing the insanely over sized Vulcan cannon on his motorcycle toward the ground to blast himself up there.  Bombstike stands ready (leans ready anyway…Spy Troops…sheesh) with a high powered sniper rifle to shoot the idiot in the head if he tries, before he can unleash a hail of 20mm fire down upon his own base.

Covergirl is keeping her 80’s vintage Missile tank out of harm’s way, but still providing a barrage.  Bazooka will once again help her out.  He is, in fact, leaning back like that to better approximate Covergirl's firing arc, not because I gave up getting the ridiculously top heavy goofball to stand up after thirty seven tries.  Shipwreck is nearby his lady love (Devil’s Due/Spy Troops version anyway) practicing semaphore…or directing traffic…maybe he’s a little teapot. I don’t know. It’s lucky he’s standing up at all, just be thankful and move along.

General Hawk is in his contractually obligated cool looking pose above an urgent meeting. Flint, Lady Jaye and Breaker are desperately trying to call in reinforcements that can withstand the deadly new foes.  They are being hindered in their task by the loudly complaining Gung Ho and Roadblock, who are filing vociferous objections to the fact that they were replaced in the main action by lame Spy Troops figures solely to let me make another stupid Predator joke. 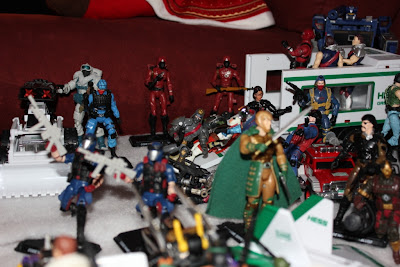 Even with the cinematic help, the Joes are losing ground behind their damaged aircraft.  With the Insecticons and Serpentor leading the way, the other Cobra members are having an easy time of it.  Major Blood is helping the Cobra CLAW operate (and most likely lift) the Uncomfortably Large Gun.  From a safe distance, the Cobra artillery strike is initiated by the Snow Serpent who finally managed to mount the rocket launcher on the Combat Snow Plow (at least for long enough to snap the picture).  The Cobra Anti-Armor Trooper will be joining in as soon as he can actually see what the heck he’s aiming at. (Seriously, why do they even make the helmets detachable?)  Meanwhile, at Cobra’s Mobile Base, the Decepticon envoy has arrived. 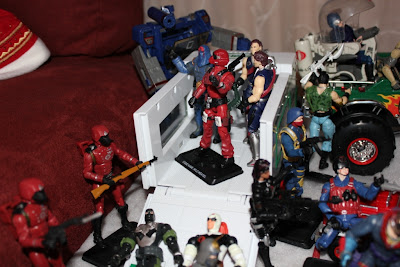 Cobra Commander, proving why he and only he should rule Cobra, has arranged an alliance with the Decepticons to bring total victory once and for all…

Sorry, where was I?

The Commander and his elite leaders are meeting with Soundwave.  As the twins, Tomax and Xamot, run the negotiations and Wild Weasel gains as much avionics intel as he can, the rest of the command group breaks up to assist the battle.   A Cobra Officer accompanies the Baroness to review the scene and check on the progress of getting the Mini-Hiss into battle. Scrap Iron’s apparently finished as he’s busy doing an Elvis impersonation instead of working on the vehicle. (Did I mention how hard it is to get them to stand in the “snow”?)

An Iron Grenadier works with Destro to use the new technology they’ve just acquired to convert Cobra ninjas into Robotic CyberNinjas! (No, this has nothing to do with either Hasbro franchise, but just in case the Mortal Kombat figures ever go to clearance, I want to set up an in story reason to buy them…Hi Honey!)  The Crimson Guards stand ready to insure that none of the ninjas try to escape. (Although since they’re ALL Spy Troops it is unlikely they will be able to stand up, never mind run away.)

Nothing could possibly defeat the superior technology and firepower they now face.

Our heroes are doomed to be crushed beyond recovery, leaving a world ruled by the Cobra/Decepticon Pact! 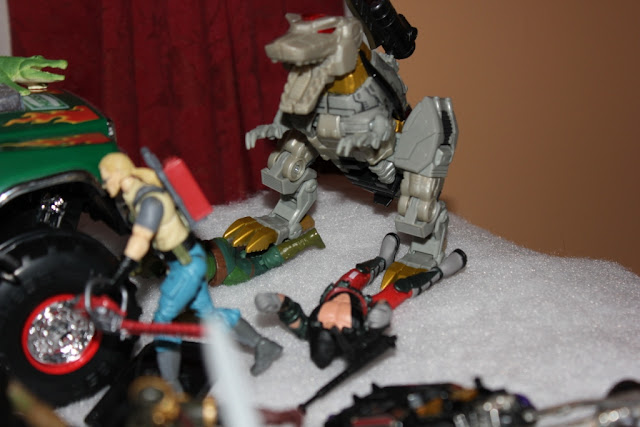 Me, Grimlock say you wrong…
and you ugly too! 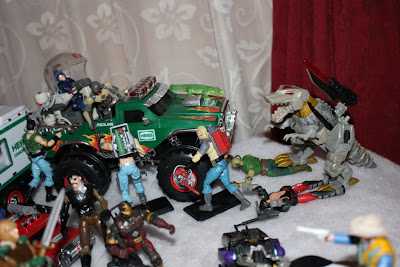 As we watch the Dreadnoks flee the rampaging Dinobot, hoping they can all hang on the Trouble Bubble that the (once again poorly assigned) Dessert Trooper has been prepping for a hasty exit in case yet another villainous plan collapsed under its own weight, we bid farewell to this year’s village. 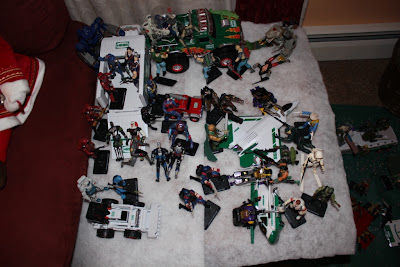 Is this overhead shot of the entire plateau from the point of view from an Autobot cavalry about to swoop in and save the day, led by Optimus Prime himself?

Or is it from the viewpoint of a squadron of Decepticon seeker jets led by Starscream to wipe out the entire G. I. Joe force and set himself up as the Emperor of Earth and a viable rival to Megatron?

Instead, it’s that my old tired knees wouldn’t let me squat down anymore after setting the whole mess up, and then trying to get decent pictures of the thing.  I had to stand up before taking the last image.

I hope everyone had a Merry Christmas.

I hope everyone has a Happy New Year.

A high resolution picture of the whole schmear.  As always, click to enlarge. 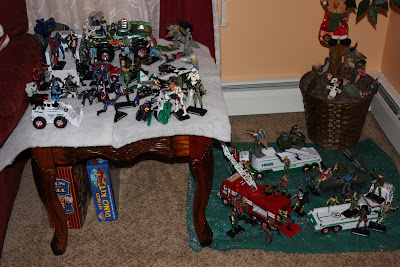 It’s not that I think anyone cares enough to make a detailed visual survey of my crazy obsession. I’m just excited that my wife let me use her super deluxe magic Cannon camera, and I had to show off. 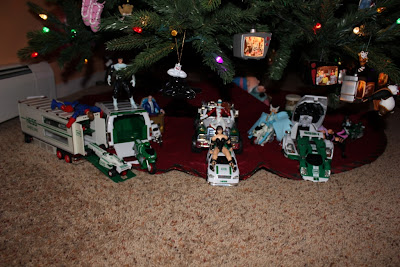 .
My daughter decided to join in late in the decorating and choose a gang of Marvel heroes (and Xena, "Because she's pretty") to guard and/or drive the HESS platoon underneath the tree this year.   The reason she was inspired to do this is my wife found the Miracle on 34th Street village pieces she bought after last Christmas. 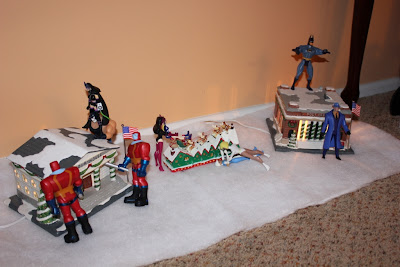 Of course my daughter had to place several DC characters in and around the village. (That's why Marvel got the HESS trucks, she's always fair.)  As you can see Batman is remaining above the festivities to make sure everything is OK. (She's been trained well.)  And even though Ice and Power Girl are fighting over who gets to see Santa next, everyone is mostly cooperating. When I asked why the bad guys were helping the good guys to make sure everything was going well, she looked at me like I was an idiot and said,

This is the infamous Jason Checking in...that was awesome man! Thanks for the extra effort this year to make a new battle. I cant wait till you and your daughter combine forces and create a massive Joe Battle together.

Thanx much,both for reading and serving as a muse of sorts. (I don't belive the ancient Greeks were that sarcastic to their muses however)