Well, it looks like DC isn’t through deliberately annoying me yet.
No, unlike every aging comic fan with a blog on the planet, I’m not complaining about the Watchmen prequels. I figure Alan Moore will be offended enough for all of us.
Today’s gripe is that they’ve solicited a new Shazam series, by Geoff Johns and Gary Frank.  Initially, I expected greatness from the guys who brought us the most recent of the no longer existing origins of Superman.
Then I read the full description…
Where to begin?  How about the title?
THE CURSE OF SHAZAM
Way to set the proper tone.  Tales of Captain Marvel have always been the ultimate in wish fulfillment.  Who needs a kid sidekick in scaly underwear for reader identification when you’ve got an honest to goodness little boy that can turn into a full grown superhero merely by speaking a magic word.  I can see obviously how one would consider that as a “curse”…
Oy.
Looks like one of the last bright, happy and fun filled characters from the Golden Age is heading down the grim and gritty, angst filled highway for good.  Have they learned nothing from the Countdown/Trials of Shazam debacle the last time they tried to darken the old Fawcett crew. (Solomon was a woman working as a tattoo artist in the latter. Need I say more?)
Jerry Ordway (Writer/Artist of the best modern take on the Shazam myth, keeping the core of the characters, yet still blending them well with the rest of the then current DC universe) had to come in after those other series in the pages of JSA and fix everything.  Not only did he straighten it all out, but he used the wizard Shazam to do it while explaining why the changes were stupid.
That’s right…the wizard Shazam.  That’s where Billy Batson got his powers from, speaking the name of the WIZARD, which just happened to be a handy acronym for the source of the powers:
Solomon – Wisdom
Hercules – Strength
Atlas – Stamina
Zeus – Power
Achilles – Courage
Mercury – Speed
Billy Batson was then transformed into Captain Marvel!  Apparently that won’t be the case anymore, as the character will be renamed (following another less than stellar lead from Trials of Shazam.) as Shazam. This means he speaks his own name to get the power.  I can predict a rash of kids in Fawcett City (or wherever he is now) running into the streets yelling, “FRED!” “MURRAY!” “HOWARD!” etc. in hopes of a stray bolt of lightning.  Johns claims the name is being changed because, “Everybody thinks he’s called Shazam already, outside of comics.”
If that is how comics should be made…
Instead of creating the Darknight Detective persona that returned Batman to his roots and has defined him since the 1970’s, O’Neil and Adams should have written and drawn the Caped Crusader exactly like Adam West.
Geoff Johns’ own new Aquaman series should feature a title character who is a loser that gets captured frequently and only power is talking to fish.
Heck, if what the general public thinks is really how comics should be created, then one of Johns’ main pet heroes, Green Lantern, should sport a fedora and be driven around by Kato.
We all know why the change is being made.  The character was out of publication from 1953-1972, (thanks to a questionable infringement ruling DC got on Fawcett…In my, and many others’ opinion the transformation part makes the Big Red Cheese WAY different than the Big Blue Boy Scout.  DC was just royally peeved that Superman was being outsold by a kid with a magic word.) During that time, Marvel comics jumped in.  As long as Marvel publishes a Captain Marvel comic every so often, DC can’t put those words on a cover, hence all the DC Whatever of Shazam titles. (Also hence why Marvel has had over a half dozen characters with that name, including several aliens, and an African American woman who turns into energy.)
All these years after winning their lawsuit against Fawcett, DC is now publically admitting defeat to Marvel…how sad.
While legal considerations and merchandise branding are important, isn’t the integrity of a character who’s been around, and mostly unchanged, since 1940 even more important?  (OK, even I had a hard time keeping a straight face for that one.)
The issues with the name change don’t end with Captain Marvel himself.  He’s the center of the whole Marvel Family.  Will they be the Shazam Family now?  Billy’s sister became Mary Marvel by saying the wizard’s name.  Now, she says her brother’s name (less impressive to start) and becomes who, exactly?
Mary Shazam lacks a great deal of comic book pizzazz.  Alliteration is often a good idea for hero names. Maybe she’ll be Suzy Shazam?  One problem: “Suzy Shazam” isn’t the name of a super hero…it is more like the name of the opening act at Lace - A Gentlemen’s Club.
﻿
﻿

Then there’s poor Freddy Freeman.  The newspaper boy was given some of Captain Marvel’s power to recompense him after being injured as a bystander to one of the Captain’s battles.   When he said his hero’s name, he was transformed into Captain Marvel Junior. (Elvis Presley’s favorite comic book character and the reason he dyed his hair black, and used lightning bolts and off the shoulder capes in his costumes.)
Freddy was also one of the only members of the caped club who couldn’t say his own name, lest he be transformed back in to a kid.    That little idiosyncrasy now must extend to the entire Marvel Shazam family. (Assuming Suzy Shazam can get off her pole long enough to fight crime.)
I’m guessing any hopes of the fun and kid friendly Uncle Marvel , Lieutenant Marvels, Hoppy the Marvel Bunny and Tawky Tawny aren’t even worth mentioning (especially with the sad cancellation of Tiny Titans)  during this slide to “realism” in stories about muscle-bound aliens and magic people who beat each other up while wearing fancy pajamas.

To top it all off, the last two straws.
The first is that in the preview pages (beautifully drawn by the way, can’t take anything away from Gary Frank) Billy Batson looks to be a significantly older teen than the boy he’s previously been.  With all the other heroes in the DCnU much younger than the original versions, the hero with a child’s innocence guided by the wisdom of Solomon among more experienced, yet  also more  cynical and less enthusiastic, adult heroes dynamic that’s played well for years with this character just got the Rock of Eternity dropped on it.
Lastly: they’re changing his costume too.  If you change the character’s name, interaction with others AND costume, there really isn’t much left, is there?  Call him Angsty Teen Lightning Dude, and leave the real Captain Marvel alone until the comic climate comes back around to where they’ll be welcome in his true form as created by C. C. Beck and Bill Parker, and visually modeled after Fred MacMurray.
Ordway wasn’t the only one to realize the potential of having “old fashioned” heroes interact with the rest of the DC universe to show a stark contrast to the darker sides and throw a little old school comic book fun into things.  Paul Dini and Alex Ross used Captain Marvel (I will keep calling him that forever, even if Marvel sics the Disney lawyers on me.) well for that role, as did Geoff Johns himself in JSA.  He also fit in as part of the Justice League Unlimited, Batman: Brave and Bold, and Young Justice cartoons.  You’d think with the ability to be easily worked into that many different versions of the DC Universe without altering him, he could find a home in the DCnU.  I mean, without a Final Crisis type merger of the craziest fun elements of the Marvel Family being besmirched by the craziest dark elements of Jack Kirby’s DC creations.
Am I overreacting?
Am I ranting and raving over things I haven’t read?
Am I assuming the worst possible treatment of a character while only knowing a bare minimum about a new series?
Of course.
I’m a comic book fan, that’s what we do.
But this time it is extra important.
My Dad’s favorite superhero was Captain Marvel.  That’s not why it’s important, though, as he wasn’t that much of a super hero comic reader, anyway. His real favorite comic book of all time was MAD (before it was Mad Magazine), and through it he taught me how richly any idea this bad deserves to be held up to satire and ridicule.
﻿ 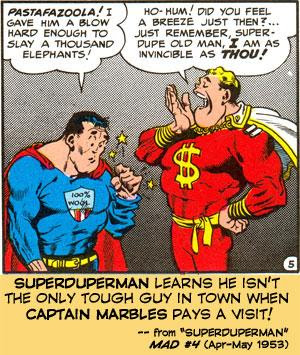 If Shaquile O'Neal not involved in the project, I'm not interested in it.

Thanx for posting. I think after Steel, Shaq has been banned from the DC universe in any form.