Fourteen years ago, an amazing film sailed across the world’s movie screens.  This tragic tale of a doomed ocean liner ran the gamut of emotions.  Amidst heart rending tragedy there were views into the most inspiring actions of human courage and spirit, as well as glances at the lowest levels of pettiness and selfishness.

Cutting edge special effects, a score by an Oscar winning composer, and dynamic writing and direction allowed the audience to truly connect with the fear of the trapped individuals, the conflict between self-preservation and the need to help others, and the crushing despair of a romance that survived hardship and disaster only to be lost to a heartless sea.

Wait, you didn’t think I was talking about Titanic, did you?  That over sappy snooze fest can’t hold a candle to the seaborne adventure aboard the Argonautica that shared theater time with it: Deep Rising.  I am completely baffled by the much greater popularity of the former of these two shipboard stories.

Below is a list of reasons clearly defining why Deep Rising is a far superior film.  I’m not even counting the complete absence of a giant squid monster. This goes without saying and is something that even the most novice movie goer will notice is missing from Titanic.

To have a good story, you need a good villain. Here are some areas where Deep Rising proves its superiority.

Evilness- a good villain shows how despicable he is.

Titanic: The villain is snooty and arrogant.  He engages in wrongful accusations, a failed chase, and a cowardly escape from the ship, without actually killing anyone.

Deep Rising: There are two main villains.  The primary is a corrupt ship owner who sacrificed his entire passenger list to get insurance money; the secondary is a merciless mercenary who is willing to, and in fact does, shoot anyone who gets in his path.

Armaments – How a villain is armed shows preparedness, competence, and ruthlessness.

Titanic:  The guy wields a pathetic pistol, and is unable to hit anyone with it.

Deep Rising: The leader arms his squad with hand held Vulcan cannons which violate the laws of physics right off the bitchen-o-meter.

Titanic: He takes the coward’s way out and commits suicide, off camera providing no entertainment to the audience.

Deep Rising: The secondary villain chooses to use the pistol given to him by one of the good guys in an act of compassion and sympathy not to try to save himself, but to shoot said good guy. Then defenseless, he is eaten alive by the giant squid creature (which again, is sorely lacking from Titanic.)
The primary villain leaps from the deck of the ship he sacrificed to a smaller boat, shattering both his legs. His injuries prevent him from getting to the steering wheel and altering the course of the small boat, which collides with his ship, destroying both in a wonderfully gigantic and impressive explosion. 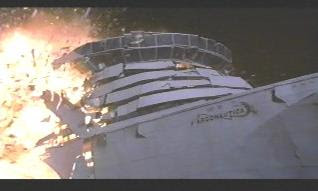 The music in a film is a key element of the tone and emotion of the story.

Composer: The score sets the overall feeling for the film.

Titanic:  James Horner gave us the amazing soundtracks of Braveheart, Mask of Zorro, Star Trek 2, and a Beautiful Mind.

Deep Rising: Jerry Goldsmith has been part of amazing soundtracks dating back to The Man from Uncle, Patton and Planet of the Apes.  He gets a slight edge for longevity, but this one’s pretty much even.

Song: The right song can make or break a pivotal scene.

Titanic:  Celine Dion, going on and on and on...please stop.

Director:  Not only does the director make a strong impact on the final quality of the film, but a film can also have a giant effect on the director.

Titanic: Before this movie, James Cameron gave us unbridled awesomeness like the Terminator films, Rambo II, Aliens, The Abyss, and True Lies. Titanic represents his shift to non-awesome, overlong, boring Oscar hunting films, and now all he seems to want to make is tales of giant cat like Smurfs.

Deep Rising:  Before this movie, Steven Sommers made some kids' flicks. Afterwards his pile of ridiculous, wildly goofy, explosion filled films continued with The Mummy movies, Van Helsing, and G I Joe.

Titanic is known for being an epic tragedy, but consider which film really inspires more heart wrenching moments.

General: The tragedy as it effects the mass of largely unknown extras.

Titanic:  The passengers sink, and either freeze or drown.  This is sad, but fairly passive and uninvolving.

Deep Rising:  The passengers are all eaten alive, excreted, blown up AND THEN sunk providing many more levels for a viewer to feel their pain, especially when they end up looking like this. 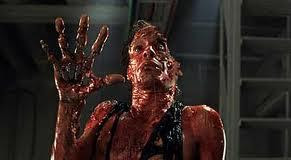 Personal: The tragedy of the main characters is made more forceful by the connections forged with the audience.

Titanic:  Jack freezes to death, mostly because Rose can’t shift her carcass a smidge over on the bit of ship she’s clinging to.

Deep Rising:  There are only two women in the majority of the film.  Both are gorgeous, and about half way through, one is eaten by the giant squid. (Y’know, the one dramatically missing from Titanic.) If that isn’t tragic enough, she’s Kevin J. O’Connor’s girlfriend in the movie. His presence, when entertainingly griping and complaining, alone guarantees wildly fun scenes and dialogue, therefore anything that makes him somber and quietly sad is doubly tragic.

Final aspects, how long one must sit through a movie and how the story ends can have an overwhelming influence on the experience.


The length of the movie, in this day and age of busy schedules and hectic lives, is linked to its quality in terms of per minute pizzazz.

Titanic: At over three hours long, it requires the sacrifice of a large portion of one’s day to see a story that can be summed up in three words:  The Boat Sinks.

Deep Rising:  With a run time of ninety minutes less than Titanic, one could watch it, and then watch Evil Dead 2, the most awesome movie in the history of cinema, in the same amount of time.

The ending of the movie leaves a lasting impression on the audience.

Titanic: Jack’s dead, and Rose has been hiding a priceless jewel her whole life, and then tosses it into the briny deep…instead of, perhaps using the money to actually help people.

Deep Rising: The heroes clamber onto an island beach leading to a cliffhanger that indicates our plucky band of survivors may be about to meet King Kong, still the representation of cinematic awesomeness after almost eighty years.

As you can see, Deep Rising is clearly supreme in all areas that truly matter and I didn’t even mention the Jet Skis, or the woman being pulled into a toilet. (Two other things clearly lacking in Titanic.) This is why I need to send a call to arms out to all my fellow nerds and geeks.  Next year, they are planning to release the wrong one of these two ship disaster movies in digitally remastered 3-D.

Instead of writhing spike filled tentacles and explosive automatic fire flying out of the screen, there will be endless 3D scenes of talking, crying and lamenting things that could have been.  We must act now and we must act quickly to get this changed.

I forgot who I was talking to.

I also never got the hype about Titanic and waited until it was on TV for free before seeing if I was mistaken. I wasn't.

Thanx, I'm actually rewatching Deep Rising now. I pulled it out for Mom to borrow and coulnd't help it. (It's genetic I tell you.)

I should probably publically admit that the most I ever saw of Titanic consisted of, "Whoah, that guy bounced off the propellor...ok this is boring again, *click*"