Dance Wars: Episode One – A No Hope

The down side of showing any promise and success in the Beginner Ballroom Dance Class was I had absolutely no excuse to keep me from continuing.

Therefore, after a brief period of winter break to ice my knees, we headed right back into the Intermediate Class.  Seeing a giant “Got Milk” poster of gymnast and Dancing with the Stars champ Shawn Johnson did not do great things for my self-esteem. 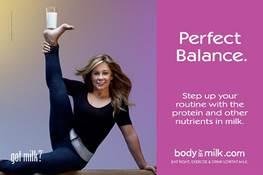 There were several couples in the Intermediate Class with us, but none were familiar. Not only were we the only ones to continue from our Beginner Class, but the other people all had previous lessons from both Tony and elsewhere.  Add to that the sparsely attended Advanced Class semi merged with us, and the stage was set for me to be completely out of my league on a regular basis.

The first week started out with all Rumba, to get us back in the proper mindset. Most of the moves can be transferred to the other dances, but Rumba is a heck of a lot slower and less knee grinding.

This was excessively important  because with a semester behind us apparently, I was also expected to pay attention to line and frame (whatever they are) looking at my wife, and many other complicated tasks I was supposed to do in addition to the total brain occupying state of  moving my feet in an approximation of correctness.

We alternated being dizzy.  There were times we were supposed to both turn in synch with each other.  Ever since I’ve been on daily aspirin, I’ve had to take pirouettes out of my juggling routines, and they didn’t fit in the dance much better.  Rosa became equally wobbly on the head swooping dip we tried to work in occasionally.

Luckily, she could still effortlessly execute the turn I stepped back for.  The one in the other direction however, sent her careening away from me with my weight on the wrong foot.  We never did figure out which of those two errors was the cause and which was the effect.

Phoebe saw us do one of the few steps we had actually recalled after the time off prompting her to tell us, “You remember, that’s why you were champions.”

“Great,” I thought. “Now I have to overcome unrealistic expectations along with my own ineptitude.”

We returned directly into the Rumba. No complaint from me, it’s nice and slow, and there’s the transfer benefit. More importantly, unlike almost all of the fast dances, I can usually locate the beat in that one.

I had been going to physical therapy for my back and shoulder, and was concerned that I had a broken Rumba, but it got better quickly.

Since we were no longer beginners, we were told we shouldn’t fall back to the basic box, but use “back and forth” as our base position.  Well, not really position. Whatever the dance step version of position is, that’s what back and forth was.

From there we learned full turns, half turns, and steps that weren’t called turns, but one of us usually ended up turning anyway.

I remained hopeless at spinning myself, and we had weird unresolved problems with “shoulder to shoulder,” but aside from those minor issues did relatively well.

Phoebe even complimented me on being good!  Sadly, I was informed that didn’t mean, “I can stop now.”

All the new steps led to a more complex routine.  Tony showed Rosa while I tried to follow him, but I still couldn’t get the end. Finally it clicked when I watched him teach it to another couple, when I could be undistracted by someone far more skilled than I dancing with my wife.

Tony and Phoebe finished up with an advanced dip demonstration that merely observing threatened to put Rosa and me in traction.

One of the other couples mentioned places they went dancing and offered to bring us contact information for them.  We figured it would be very helpful to have formal locations we weren’t going to practice, rather than simply not practicing alone in the house.

I decided going to dance class directly after physical therapy would be a good way to keep my schedule nice and tight.

Starting with the Foxtrot, my white boy genes allowed me to hobble along, but it was quite painful.

This was followed by Merengue, usually a very simple collection of steps.  Basically if you can walk, you can Merengue.

That night, I couldn’t Merengue.

By the time we returned to the previous week’s more complex Rumba details and advances, I was a TOTAL disaster.  A chunk of one on one instruction helped a tiny bit, but for the most part, I was almost crippled.

Shortly after this painful and embarrassing showing, we were e-mailed the locations of various sites to go ballroom dancing.  As being able to walk without staggering and grimacing was a bit higher on my list, we didn’t attend any of them.

We pulled off quarter turn, open walking, and multiple turns.  Our timing was good, I managed to lead almost the whole time and there were only minor moments of confusion.  We received even more compliments from Phoebe.  This would all be far more impressive if I remembered ANY of what we did for more than eight seconds after we left the school that night.

Then my white boy genetic advantage turned into the largest genetic shortcoming in the history of dance when Tony announced the Hustle.

Not only were we starting in a hole because they didn’t teach any Hustle during our Beginner Class and he was moving on to the next stages, but I possess the strongest anti-Hustle chromosomes on the planet.

I tried to explain,

“I can’t do this, it’s genetic. My Dad was banned from doing the Hustle in the state of Pennsylvania!”

But aside from getting even more blank stares and flat “what?”s than usual for me, they made us do it anyway.

The Explanation:
On one of my parents’ vacations to the Poconos, the resort entertainment director was named “Dancin’ Stan.”  He gave a Hustle lesson/demo at the nightclub one evening. After learning my father’s name was also Stan, and seeing his feeble attempts to dance, he ordered him to sit down, and never perform the Hustle in the state again, as it was an embarrassment to the name “Stan.”

Even with the large amount of tutorial given, including Tony locking our arms and shoulders together to allow him to drag me through the steps, it was hopeless.

I was continually too slow, too confused, and too likely to add or lose steps.

He kept telling me I had to find my, “And One.” Personally I think he hid it along with the missing “Five” from the previous semester’s Salsa.

There was no physical therapy, but I did have to run a test standing up most of the day at work, leaving my knees well behind the pack at the start.

Tony started with more detailed counting of the Salsa and amazingly revealed the location of the missing Five!  HOORAY!  It turned out it was a weight shift from one foot to the other, the avoidance of which was responsible for the large number of times I fell over for no visible reason while attempting to Salsa.

With my newly grasped Five knowledge, I could finally do the basic step well.  Of course, that meant the basic step went the way of the Rumba box. It was replaced by the more difficult travelling step and multiple new turns and leads.  The likelihood of falling over returned with a vengeance.

Tony’s teaching method that week tended to start with telling us to do one specific step, then launching into a combination of about fifty steps, followed by saying, “Now you do it.”

Prompting me to regularly shout, “Do what?!”

This was when I realized that everyone else there that evening would have qualified for the “Advanced Class” if, in fact, there were enough people to separate us.

I kept trying to at least do the basic step, but he cheated and turned the music on, losing me completely.

Just as I was making some headway, the music switched to a Hustle.  As a non Latin Dance, the option of letting Rosa lead was in no way available.

I couldn’t remember it at all.  Phoebe bravely volunteered to walk me through it again, but by that time, my right knee couldn’t stand the pile driver like pounding required to support me in my pathetic quest for the “And One.”

Mid-way through the semester, and I had succeeded in retreating almost completely to where I was at the start of the Beginner Class.

How’s that for progress?

On a positive note, there was massive room for improvement.

Click here to see the improvement(ish)
Posted by Jeff McGinley at 2:00 PM