I know, that due to my superhero geek reputation, there are people who actually wait for my blessing of a superhero film before they decide to see it or not. 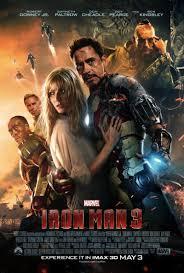 The problem with this (aside from them seriously needing to work on their priorities) is:
How do I write a coherent and thoughtful review of the third movie in a series that is also the seventh part of a shared universe, when they all have managed to maintain consistently high quality, while also avoiding non-trailer shown spoilers, that doesn’t end up being some version of:

I can’t even do my normal introduction to these kinds of films, as I already talked about how Iron Man comic books were some of the first I bought back in my Avengers review.  Observant readers may notice that I have some reference to EVERY Superhero movie as “one of the first comic books I bought.”

This either means:
A) I’m full of it.
Or
B) I’ve always read too many comic books.

But probably:
C) Both of them.

Here be the bare bones basics-

At my urging, my wife convinced my daughter (after her initially showing no interest) since she liked The Avengers more in 3D she’d probably like this movie better with the funny glasses on as well.  Predictably, there wasn’t much of an added effect and we probably should have saved the extra money.

They did a heck of a job, considering the perfectly cast Robert Downey Jr.’s contract is up with this one.  If they’re foolish enough to not drive several busses of money up to his house to continue, it served as a splendid capstone to the series.

If the money bus method is optioned; it served as a well planned directional change, and launching point for continuing adventures.

I was impressed how they managed to pull in and reference a ridiculous number of storylines from Iron Man comics, while scrambling them up excessively well enough to keep me guessing most of the way through.

I might say the comic book story that had the most influence on Iron Man 3 was Daredevil: Born Again, but I’m a far more experienced comic reader than that.  I’m assuming that the multiple Iron Man comic book arcs showing a villain specifically targeting Tony that were inspired by and borrowed (stole?) from Frank Miller’s famous run on ole Hornhead were the real source material.

It was interesting to note, that while a great many elements from Warren Ellis's Extremis storyline were used, the parts that affected Tony’s armor were not attributed to the film’s version of “Extremis.” However, the villains it created made for large gangs of powered bad guys for our heroes to have to deal with in amazingly jaw dropping ways.  Thanks to the Avengers linking the formerly technology only based Iron Man series to the more fantastical elements of the Marvel Universe, this pile of fun was possible.

The Iron Man armors, with all their advancement and upgrades, remained solely created by Tony.  The changes shown to both himself and his suits highlighted one very cool thing about Iron Man.  Unlike most superheroes, where staying as close to the iconic origin and powers is the core, and in fact strength, of the character, Shellhead is in constant flux.  By definition Iron Man is tied to recent military conflict and industry.  Also, by definition, his powers (and therefore costume) must change to always be just above the cutting edge of modern technology.  The suit isn’t what makes him a superhero though, it’s his ability to create, refine and use the suits; as well as his ability to improvise without the suit that makes him a superhero, and turned into a nice little semi-tribute to Iron Man 196's "Nothing in Particular Man."

The advantage, I think, Marvel has over DC in making strings of movies, is by having their heroes be less iconic, they can take advantage of the entertainment factor of Tony frequently acting like a complete butt-head, in spite of, and sometimes because of his genius.  Even in the comics, Stark is used to having the proper, future seeing solution. It isn’t pure arrogant overconfidence if you’re right almost all of the time. Therefore, the fact that he could be mistaken never occurs to him. This often sends him barreling off in self endangering, friend offending, but extremely high potential story creating directions.  (Making Civil War completely in character)  This is why a great many of his problems come from people he's accidentally insulted or dismissed in the past.  It is also why any meeting between women who have a past with him has such phenomenal amusement value.

For Iron Man’s opposition, due to using the wide variety of inputs and some original twists as well, they managed innovative and surprising uses of a nearly fifty year old villain.  Yet again, like every opponent he's faced in the Iron Man film series, his opponent is a dark reflection of Tony.  This highlights why, despite occasionally being quite a jackass, Tony is truly heroic.

The implementation of the Mandarin was done the only way that was really possible.  Staying exactly true to the comics, and going with a Fu Man Chu clone would not only be too politically incorrect to consider these days, but also force comparisons to Big Trouble in Little China. Not even the combined might of Marvel and Disney could out-awesome that film.

Along with Tony - Happy, Pepper and Rhodey all got character development, intelligent witty banter, and some bitchen' displays of physical and metaphorical buttkickery in their areas of specialty.

Some of Tony’s own character arc was done through Marvel showing they remembered the important connection between children and superheroes. Tony had a contact that highlighted the value of each to the other, while maintaining his perfectly portrayed likeable jerk persona.

I only had two concerns caused by the movie, both on the “meta” level, outside the film itself:

Stan Lee’s cameos used to be in shots with the stars of the films, allowing behind the scenes interactions and cheers for “The Man.” In the more recent pictures, he shows up in separate side scenes that could be quickly and easily filmed away from the main unit. I hope he’s still doing OK.

Almost everyone in the theater still leaves when the credits start.  Seven Marvel movies and they still haven’t learned to wait for a quick banter filled exchange that will inevitably bring laughter and a greater sense of a connected universe.

The character interactions were well played and amusing.

The settings were gorgeous and detailed.

And the action set pieces were eye popping and cheer inducing.

Basically…
IT WAS AWESOME!

GRAB THE FAMILY AND GO SEE IT!
Posted by Jeff McGinley at 2:00 PM

I was so hoping you'd have this...Awesome!

And you're quite welcome. Happy to provide a useful service to the community...or something.

And my week is now complete - we saw it on Monday and I was waiting for your confirmation and explanation of awesomeness - I can now have my weekend....

Once again, happy to fill a valued need...

For highly variable values of both "valued" and "need."