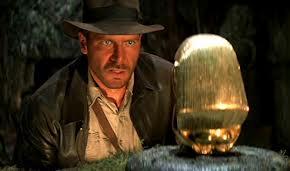 For a while, it was my only failure.

Whenever my daughter didn’t want to watch a movie I knew she’d like, and I’d ask, “When have I ever led you wrong?”

Her answer was, “That Indiana Jones thing.”

We tried to watch it when she was younger, using my scratchy, pan and scan, beat up VHS tape.  Some of it caught her attention, but she mostly ignored it.

With the release of the Blu-Ray set, I felt it was time to try again.  I got a little help from the Lone Ranger (another hero who's hat miraculously stays on) in convincing her, because her complete enthrallment by that show led us into discussions of the origin of the term, “cliff hanger” and movie serials in general.

I’m proud to say my list of Daddy’s recommendations is now unblemished.

Fortunately the only thing they went back to change on the first film was the box labeling.

Indiana Jones and the Raiders of the Lost Ark 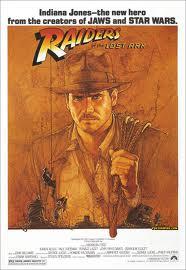 The pre credits production banner proclaiming “Lucasfilm” confused her greatly.  I should have expected this, as I only told her these movies were produced and storied by the Star Wars guy four hundred and seventy nine thousand times, not nearly enough to impact the consciousness of a nine year old.

She immediately recognized Indy as, “Someone from Star Wars…Episode four, five or six, I think.”  She correctly identified him as Han Solo, but it was not because of the great powers Harrison Ford has over women. Apparently she’s below the age that those work, as she didn’t understand why all Doctor Jones’ students were girls.  She knew it was Han, because there are only three main characters that aren’t in masks or makeup in the “old” Star Wars films, and he was a boy and didn’t look like Luke.

She initially thought Marion looked suspicious, but warmed to her very quickly, emitting a film quality, “NOOOOOOOOOOOOOOOOOOOOOOOOO!” of her own when Toht came at her with the hot poker.

Having Gimli (Sallah) show up delighted her, proving that, despite all the complaining she does about their length, she really did enjoy the Lord of the Rings films as well.

She was having fun watching the monkey, until he did the Frank Welker squeak punctuated, “Heil.”  Then she very calmly stated, about a movie featuring mind boggling stunts and magical ancient artifacts, “The monkey is a Nazi spy…that’s hard to believe.”

It’s kind of difficult to record her detailed comments about these films, since (aside from deadpan observations of primate political affiliations) her reactions were mostly emotional outbursts based on the roller coaster like pace and action on screen.

She giggled in amused relief at Toht’s coat hanger reveal.

She yelled in surprise and panic at the snake and mummy filled Well of Souls.

She applauded Nazis getting shot because they were “meanies.”  In fact she suggested (in what may be the understatement of the century) they should be called, “The Naughties” instead.

Her opinion of them led to clapping and laughter at various fates they received.  Some intense cheers were reserved for the biggest explosions and the greatest belly laughs for Pat Roach meeting the propeller, and any other soldiers that plummeted off a cliff.

By the time the truck chase scene rolled around she was still cheering and yelling, but was comfortable enough with the film to get a couple full sentences out.

These ranged from the concerned, as Indy was in control of the vehicle:
“Oh no there’s Nazis…in the back of that truck that you stole.”

To the distracted, as he hung off a hood ornament:
“Look, it’s a Mercedes.”

And the poetic, as he finally regained control and the Nazi failed to execute the under the truck trick Jones used to return:
“He got squished like a chipmunk.”

She cemented the fact that she’s still fortunately too young for the powers of Harrison Ford by reacting to Marion’s kiss with Sallah, “Um…OK.  Awkward,” and the final kiss between her and Indy with retching noises.

With the movie over, my daughter demanded to know where the title came from.  I told her what “Raiders” meant in this context, but she understood that already.  I then made sure she remembered the gold box they spent the whole film looking for with the ghosts flying out of it near the end.  She countered that of course she did, but when were they in “the dark?” 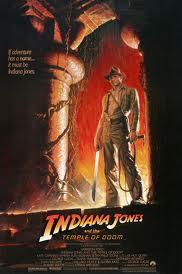 Indiana Jones and the Temple of Doom

This was the film that revealed the need for a PG-13 rating, in order to render the entire MPAA system completely meaningless.

This was also the film that revealed how much of a darker, nastier tone things will shift to if both the director’s and producer’s marriages collapse when they work out the story.

With the opening strains of "Anything Goes,” my daughter yelled, “I know this one!”

While I would like to take credit for my child being well versed enough in American culture to easily recognize a Cole Porter standard, I have to admit the recognition came from the “John Williamsish” titled, soundtrack filled playlist on my ITunes.

Once again, she was completely taken in by the adventure, laughing and cheering throughout the opening action scenes, pausing only to ask why the kid was driving.

Side note:  Wasn't Short Round wicked awesome?  He totally should have showed up in Crystal Skull.  Here's hoping for a triumphant return in Part Five.

Similarly, she was just as caught up, alternating laughing and screaming this time, in the pilotless plane and plummeting raft scenes.

She showed how spoiled modern audiences are by claiming the exploding airplane, achieved by blowing up a real miniature and using blue screen to get it into a location shot, looked “too digitized.”

Willie Scott was declared to be the, “Girliest girl ever.”  This happened even though my daughter herself was grossed out by the initial bug eating scene causing her to ignore all the exposition about why they should eat the villagers’ bugs, and pretty much all the set up for the plot provided in that exchange.  However, she did proceed to then laugh continuously at Willies constant panic induced screaming in the jungle.

The later, even more disgusting bug and eel eating scene creeped her out even further, though she did proclaim, “That’s just jell-o,” concerning the monkey brains.  The only noise she made during the bug hallway scene was very nervous laughter, which continued up through the infamous heart removing.

What really showed her level of involvement was her panic attack when Indy was forced to drink the black blood of Kali.  She went from yelling, “NO NO NO NO NO NO!” until it was confirmed that he drank it…then she switched to yelling at him to, “Quick, go to the bathroom!”

Needless to say, there was a great deal of relieved laughter once Indy was cured and she went back to giggling and cheering the heroes for the remainder of the film. Including a loud and laugh filled cheer for stuntman extraordinaire Pat Roach’s second transition into a blood stained smear in these films, this time via a rock crusher.

There was also occasionally screaming again for some of the crazier parts of the mine car chase, and the bridge over the crocodiles.  “DON’T FALL OR THEY’LL EAT YOU!”

The only time she completely disconnected with the film, stating, “I’m done,” was when Indiana Jones uttered a “bad word.”

I told her that in the case of being unarmed while on a precarious bridge hundreds of feet over croc infested waters and surrounded by evil swordsmen, that was, in fact, exactly the proper word to use.  She accepted this and went back to emotional reactions.

Once again she made me proud by uttering the loudest, “EWWW,” not for anything involving blood, bugs or brains, but for the big smooch at the end!


Her short review of this dark, scary, gross thing infested, supposedly not for little kids entry into the Indiana Jones franchise was:
"It was funny!"

Tune in next time for the final two films.
(Or just click here)

Hey, other readers, head over to the blog list on the right and check out Antonia's "Inspirational Sweets" blog. Heart warming and tummy tempting at the same time!