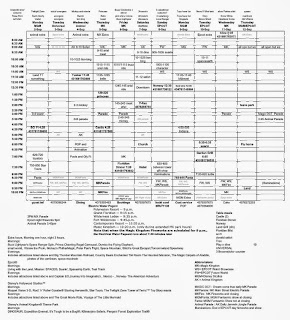 May 24, 2013: T-101
The new Meal Matrix of Doom, now simply titled “The Grid” has been begun!  The call is acknowledged instead of only dreamt about.  Turns out the cool sounding MGM parade that started after we went last time, ended last month…before we go this time. Well, poop.

May 28, 2013: T-97
I learn there is a Parasaurolophus, Anabelle’s favorite, on the Dinosaur ride in Animal Kingdom.   This may allow me to manipulate my daughter’s call, as she has been afraid to try that one.

June 3, 2013:  T-91
My eleven year old Figment polo shirt from Rosa and my first visit to Disney World together senses the call, and having held together as long as possible, disintegrates.

June 4, 2013:  T-90
Rosa has printed out the Proto-Grid. Somehow her recognition of the call makes it more real.  Amazingly, Anabelle does her homework on the computer while leaning on the Grid and manages to not notice it at all.

June 5, 2013: T-89
The new Seven Dwarves Mine Train family roller coaster track is completed. The ride won’t open until after we come home, though.  Perhaps it will fuel the call for the trip after the one we haven’t booked yet.

June 6, 2013: T-88
Rosa’s active answering of the call begins with price assessments, leading me to make a list of table service meals.  I mention a trip to The World a coworker is planning to Anabelle, and despite having no idea we are also planning one. She launches into a “Next time at Disney” set of speeches that sounds like she’s going tomorrow.
Her comments shift several “possible” meals onto the “must go” list.

The call is strong in that one.

June 7, 2013: T-87
A very happy miscommunication:  Due to her being in Peru with connectivity problems, Rosa missed the part about the Proto-Grid containing two options for a ten day trip. (i.e. arriving there on Monday or Tuesday)  She’s been pricing everything for an eleven day trip which is feasible, and due to Labor Day doesn’t require extra vacation days or missed school. Woo!

June 8, 2013: T-86
Random triggers generate questions about what rides are in which parks as we all discuss favorites and things we want to try.  Again, even with no knowledge of going, Anabelle declares that she wants to try the Tower of Terror again.  She is also interested in the Dinosaur ride in Animal Kingdom, based on my Parasaurolophus reveal, despite the presence of giant, angry poppy uppy dinosaurs.

June 9, 2013: T-85
While Rosa tends to roll her eyes at us when we get over excited in our discussions, she does join in readily.  She also switches the ITunes playlist over to “Disney” for the ride home from the Lake, indicating she feels the call just as strongly.  Considering I realize I forgot the garbage and have to drive back up as soon as we get home, that playlist is the only thing that keeps me sane for the trip.

June 10, 2013: T-84
Another random Disney discussion, this one inspired by a placemat. Rosa and Anabelle express disappointment that Aurora’s cottage isn’t ready yet.  However, that fades quickly as Anabelle didn’t realize Belle’s cottage is a new special effects laden version of “Storytime with Belle.”

June 13, 2013: T-81
Spent last night hammering out basic Grid details.  In “a good problem to have” I am out of practice setting up a stay of this long.  Finally got it down, in a form where we can save money and skip the park hopper option if we choose.  We really need to book soon, to allow me to reserve meals and stop twitching at the Grid’s incompleteness.

June 14, 2013: T-80
Ordered the Birnbaum’s Guide on Amazon.
Yes, everything is on-line now, with more detail and easier access.
Yes, the book doesn’t have anything we didn’t know in it.
Yes, the Grid will be locked down and reserved before it comes.
I don’t care, it’s fun to flip through in anticipation of going, so there!

June 15, 2013: T-79
In a remarkable coincidence, Anabelle and I start playing, “Guess what Disney World thing I’m thinking of,” instead of “Eye Spy” during our before bedtime snuggle periods.

June 16, 2013: T-78
After spending far too many conversations trying to obliquely determine if Anabelle would be interested in the Hollywood and Vine Playhouse Disney character meal, this day marks a full week that the Handy Manny song is stuck in my head.

June 17, 2013: T-77
HOLY POOP IT’S REAL!  Rosa made the booking and even reserved two princess meals. The Proto-Grid is too annoying for her to go any further as I mark park, parade and show times for all four parks on every day to help figure out the schedule… ‘Cause I’m crazy like that.

June 18, 2013: T-76
Groggy from spending too much time filling in meal reservations on the Grid last night.
Some unavailability while we’re there and questions I couldn’t ask my much saner and already asleep wife left holes in the Grid.  I call the dining line, apologize for straying from dealing with the Happy Disney People cast members by booking on-line, and straighten things out.  The correct phone number and Anabelle’s birthday is added to all reservations. Also, awesome Happy Disney lady tells me Downtown restaurants have different rules and gives me the phone number of T-Rex Café directly. They have no problem fitting our reservation in.  This is in spite of the fact that on-line there were no tables for the next sixty five million years.  It is comforting to know that a dinosaur place isn’t fuller than Cinderella’s castle.

June 20, 2013: T-74
They’ve added a Perry on a stick to the Duffy that replaced the masks with the hangy things at the Kidcot stations in EPCOT. Despite not being a teenaged Japanese girl, Anabelle says she likes Duffy better.

June 21, 2013: T-73
The Disney World screen saver, which has been unused and turned off for years, turns itself on again without either of us touching the settings.  The magic of the call is permeating our house.

June 23, 2103: T-71
Initially to show me pictures of Handy Many because the song is still stuck in my head, Anabelle digs out the old Disney photo albums.  We view three trips worth together. I barely remember to add “…whenever next time is.” every time I say, “When we go.”

June 25, 2013: T-69
Anabelle’s last day of school.  We tell her about the trip by promising her a big surprise, and showing her an Amazon.com box with the Rocky Saga in it.  She is less than impressed, until she sees the Grid and Birnbaum’s Guide underneath it.
Cue the festive, happy screaming.
She likes the sound of the Hollywood and Vine Play ‘n Dine for the final meal in the Grid.  We also push the first day’s Sci Fi Dine In meal forward fifteen minutes, allowing minor unclenching about flight delays causing us to miss it on my part.   We will continue to check later reservation time availability regularly to help with additional unclenching.

Anabelle immediately asks for a line in the Grid so she can figure out what costume to wear on which day…THAT’S MY GIRL!

Thanx. It is a powerful tool.

I too am a big fan of Disney guidebooks that I really don't need! Bummed you missed the Mine Train, was hoping for some inside scoop on that one. LOVE that Anabelle has a favorite dinosaur, and that unlike most adults, she can pronounce Parasaurolophus.

Many thanx for posting.

Those books are kind of like programs at plays, shows or circuses. A bunch of nice pictures, no really needed content, but a must buy anyway as a reminder of the event.

Even under construction, the mine train was impressive. It’s a whole new Disney mountain smack in the middle of Fantasyland. Sounds to be about the level of Big Thunder Mountain on the thrill-o-meter, but with Splash Mountain levels of animatronics.

Anabelle is still ranting about the woman in the dinosaur section of the Denver museum that didn't know what a Parasaurolophus was. I have no idea where she gets that level of nerd rage from.