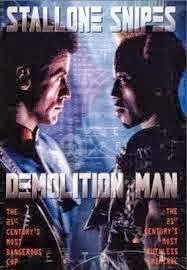 That film was Demolition Man.
Masked behind violent Nineties explosions and cheap jokes, It provided introductions, information and insights into society.

Here are the top ten reasons it remains fun, interesting and important today. 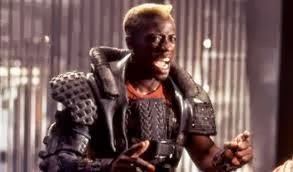 The first is simply that this could have been a standard, over the top action movie.

Well, not STANDARD by any stretch of the imagination, seeing as they started out by blowing up a freakin’ building before the opening credits.

It could have been an AWESOME over the top action movie.

However, the film avoided going down the road of what was expected fare for the day:
Wrongly accused, over achieving, super hard on criminals police Detective John Spartan breaks out of jail and gets his revenge. 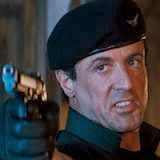 Instead it time slipped into a pile of social satire, literary references to A Brave New World (and similar works), and still kept the over the top, destructive action.  Maintaining that festive destruction was due in a large part to Wesley Snipes insanely violent, yet still entertaining Simon Phoenix.

While his attempts at humorous movies were far from routine successes, this film highlighted Stallone’s comedic abilities.  He showed a variety of hysterical reactionary takes, and coupled them with verbal responses to the ridiculousness of his situation that ranged between deadpan sarcasm and rage filled rants.  The man can execute comic delivery with excellent timing.  Granted, if I could have gotten more people to watch Oscar, an amazingly brilliant farce, this would have been common knowledge years ago. 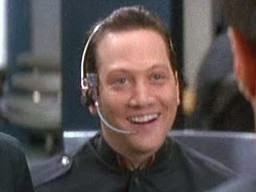 It’s also a shame that they didn’t choose to play up the satire/snark elements of Judge Dredd two years later. Stallone and Rob Schneider’s interactions were much more natural and funny in Demolition Man.  Luckily, Sly did go on to carry his ability to use those elements to inject humor into destruction and mayhem in his successful tributes to this era in the Expendables franchise.  Humor and explosions are the proper response to an overly anti-offensive society. 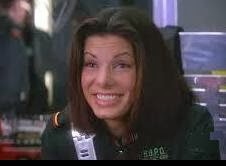 Demolition Man brought Sandra Bullock well and truly out into the public eye. It proved she could be intelligent, competent, attractive, funny, and still believably dangerous at the same time. She built her signature roles in the Miss Congeniality films on that mix. Her Oscar winning lead in The Blind Side was also a combination of warm humor and extreme toughness.  That’s a pretty amazing height reached from the launching pad of singing the Oscar Meyer wiener song.

The above paragraph is a nice example of how this country is sliding in Demolition Man directions of over cautiousness.  “Attractive” is such a wimpy word.  I originally was debating between “cute” and “sexy” and then second guessed myself over what reactions those words might lead to.

Dang it, she was cute and sexy in that film, and beat the crap out of people too!

4) “It's been deemed that anything not good for you is bad; hence, illegal.” 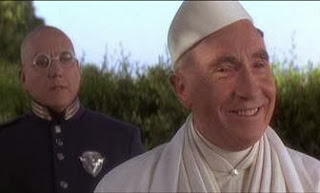 The inflationary creep of political correctness is rampant. Masters of humor such as Mel Brooks and Arte Johnson (well, I like him) have gone on record that it is killing comedy.  It’s over use can also lead to general stifling of free expression and by extension, free will.  At its most heavy handed, those in power decide what they deem offensive to groups they usually aren’t a part of, and decree restrictive lists of what cannot be tolerated. Grade school rule following, diversity  and ecological training through terror tactics falls under this umbrella, planting its seeds in the youth of the country. It also is creeping into society through overzealous “zero tolerance policies” against any theoretically offensive speech, or ANY physical contact.  If it continues at the current rate, we’ll all be air-high-fiving wishing each other a “joy-joy day,” while our police forces become overly focused on individuality and feelings until they are unable to deal with a 187 Murder-Death-Killer. 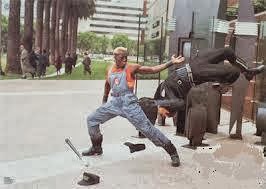 Demolition Man is a perfect showcase for how left-wing led Political Correctness is the passive-aggressive version of right-wing stifling the freedom of speech through “moral” censorship.  (I’m not too fond of both sides of the aisle on this kind of stuff, or was that obvious?) 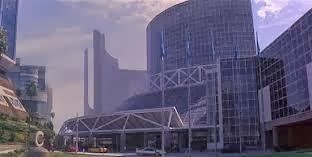 There are certain “extra-normal occurrence in the city” movies that really only worked in New York:
Ghostbusters
Enchanted
The Smurfs
The Avengers

In the same way, this example of extreme government babysitting causing anything remotely qualifying as “bad for you” to be illegal only works in the state that already has its own private list of carcinogens: California.
Notice that whole “Big Gulp sized sodas will be illegal” thing didn’t fly in the Big Apple.

The Beverly Hills crowd all looks overly happy, friendly and laid back, but have some seriously controlling beliefs about human behavior.  This is especially true if it makes them appear to protecting someone or something they deem “lesser” than themselves.

Even if they made the exact same verbatim statements, you should still put Mel Brooks and Arte Johnson in separate sentences.

I hope Thursday mentions the spectacularly bad marksmanship in this movie which set the tone for shoot'em ups over the next decade.

I don't know about separating them. "Guys who made me laugh while dressed as nazis" is a pretty small group.

I think that time frame's marksmanship would probably tie back to Commando theatrically, or the A-Team from the small screen. Both of them can trace their linage through Stormtrooper marksmen all the way back to the soldiers shooting at Douglas Fairbanks' Zorro.