6) "I want to run through the streets naked with green Jell-O all over my body reading Playboy magazine. Why? Because I suddenly might feel the need to, okay, pal?" 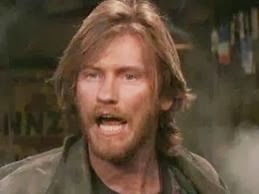 The Boston area’s Dennis Leary was the perfect person to add to the East Coast whammy on California’s not so perfect world. (Along with Stallone – high school in Philadelphia, and Snipes – grew up in the Bronx.) Edgar Friendly is basically Leary’s stage persona, and the scripted rants are excessively close to those he dives into about things that annoy him today.  It’s a pretty powerful, and scary, example of how close to Cocteau’s extremism reality teeters.

Let’s face it; we all know certain things are bad for us or unacceptable in certain company: red meat, alcohol, smacking someone upside the head, etc.   We all also know that their occasional consumptions or implementations are ways that allow us to truly feel alive.  More importantly, no matter how restrictive society is, there will be individuals that rebel and revel in the bad things to a degree dangerous to those around them. The world needs those capable of enjoying the occasional drink, smoke, ratburger or other old school unhealthy pursuits in moderation to protect the rest of society from the really harmful ones. 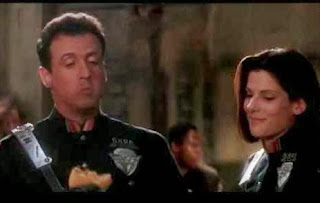 And more importantly from the over controlling leaders who “know what’s best.”

Speaking of the value of the obsolete or unhealthy:
General Motors supplied eighteen prototype, high-tech sales concept vehicles to be used in Demolition Man. Presumably they were all well above average on meters for the ecological friendliness, passenger safety, and unobtrusiveness.

With all of that green, progressive futuristic hardware available, what did the heroes use when it was time to ride to the rescue in the lap of sheer, unadulterated awesomeness, and lay down an epic ass whuppin’ on the villain?

8)  “All restaurants are now Taco Bell”

The movie made a big joke about the Franchise Wars yielding a single food service entity.
Ha ha, What a wacky concept!

Even though McDonald’s, Burger King and Wendy’s all have, if not actual burritos, some kind of snack wrap now, and guacamole and salsa covered entrees are available everywhere, I’m not suggesting that this is literally coming true.  However, what is happening is a complete homogenization of Franchise restaurants.  Pizzeria Uno used to specialize to the point of little else in Chicago style Pizza, now it’s Uno Chicago Grill, with almost no pizza selections on yet another “They Might Be Fridays” menu. (Thanx Jesse and Nyra for that perfect name.)  People used to go to Kentucky Fried Chicken only for the colonel’s secret recipe served on the bone.  Now it has multiple varieties of chicken, plus sandwiches, wraps and other meals that can be found anywhere else.  All the individuality is vanishing from the once specialized franchises.

Come to think of it, the only exception is Taco Bell, who still limits themselves to meat, cheese, lettuce and tomato on a tortilla of some kind.
Maybe that’s how they will win? 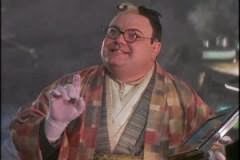 One of the most important life lessons from Demolition Man comes from the tragically short lived actor Glen Shadix.  Otho illustrates something anyone working in the modern corporate or academic world needs to know and accept.
(Yes, I know his name was “Associate Bob” in this film, but once you’ve seen Beetlejuice, he’s Otho ever after.)
No matter where one works, no matter what level one occupies, and no matter how stable or unstable one’s corporate environment appears, there will ALWAYS be those ready to kiss the posteriors of those in power who also possess the skill sets to keep the joint running smoothly and upper management happy.

Recognize these folks, befriend them, and learn to aim them in directions for personal benefit. 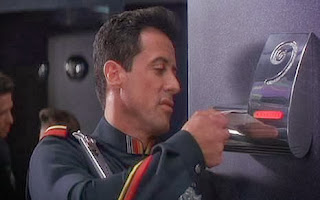 However, they should not be treated as an equivalent evil to legally punishable offenses.

The profanity police are here and they’re being inserted into our homes.  Not only are kids being conditioned to recoil in horror at the official George Carlin approved list of words, but schools are now taking perfectly ordinary words and shoehorning them into the list as part of those previously mentioned “zero tolerance” policies.

There were times I’ve had my daughter and/or nieces tattle on me to my wife, sister or mother that I said, “a bad word,” and had to go over the previous sentence in my head three or four times to figure out which word they meant.

And believe me, I am highly fluent in profaniteese, they weren’t reporting obscenities I hadn’t heard of.

Sorry teachers, but while it is “inappropriate” to use the word to directly refer to a fellow student, the proper word for a set of build-it-yourself instructions for a cabinet with inaccurate pictures, missing fasteners, and out of order steps is STUPID.

Also, if that cabinet happens to fall on my head due to inadequacies in the stupid instructions - don’t worry; the foul language that issues forth from me in a large and potent cloud will all be correctly used in a sentence.

Real, honest, high powered profanity has a needed place in the world.  It is a valuable release valve, not controlled by the same part of the brain that normally handles language. That’s why stroke victims who lose the ability to form words or sentences can still swear like a sailor, which they need as a respite from all the mental stress of learning to talk again.

It comes from a much more personal, driven and visceral place than ordinary language construction, and sometimes is the only properly passionate expression to represent the emotional highs and lows one encounters in this adventure we call life.

Two decades later - do these examples prove not only is the movie still a hoot and a half, but also an important and relevant, educational highlight of information and precautions about an society overly concerned with being inoffensive?

The best answer is Officer Alfredo Garcia’s final line in the film.

Jeff McGinley, you are fined one credit for a violation of the Verbal Morality Statute.

Jeff McGinley, you are fined one-half credit for a sotto voce violation of the Verbal Morality Statute.

It may already be too late.
Posted by Jeff McGinley at 2:00 PM

My local Taco Bell is actually a Taco Bell/Pizza Hut serving from two sides of the menu.

I've seen that, with a KFC thrown in too.