The Litany of Godzilla: The Tri Star Year: Changing Unchangeables

After the end of the Heisei Series, Toho handed the reins (or however you steer giant radioactive monsters) across the Pacific to Tri-Star.

The first fully American made Godzilla movie gets a really bad rap.  Let’s face it, having the trailer look like a straight up horror film for this action comedy started everything out on the wrong big scaly foot.
The reputation may be earned, but its importance to the franchise history makes it deserving of a closer look.

For as much flack as it gets, the movie was dedicated to the recently deceased Tomoyuki Tanaka, (who produced all of the previous Showa and Heisei era Godzilla films) and is chock full of traditional Godzilla movie characters themes and occurrences:

A plucky, struggling reporter willing to do anything for a story, with a goofy yet competent sidekick.

An experienced and forceful military commander who is the most qualified to deal with this situation, yet is still way out of his element.

Users of military hardware who don’t understand that having distance weapons means you can attack from a distance.

A socially awkward scientist whose unusual area of specialty grants him insights to both how to deal with the monster, and the fact that it may not necessarily be a “monster.”

Several stages of elaborate plans, most of which don’t work.

Past relationships which have sudden, coincidental importance, and are rekindled.

A focus on a major city for vague reasons that are glossed over.

Surprisingly tender parental moments from a big scary thing to a smaller next generation spawned via an explanation that lacks substance.

The people, situations and storyline could easily fit into one or more eras of the Toho Studios’ films, with one small exception.

Ignore that, arguably extremely hard to ignore item, and the film can be enjoyed as an old fashioned “B” Monster Movie.  It has much more in common with The Beast from 20,000 Fathoms, the 1953 creature feature that inspired the original Gojira.  This “Godzilla” would fit in quite well with that film’s Rhedosaurus, the Ymir from 1956’s Twenty Million Miles to Earth, or any of the myriad animals exposed to radiation and made gigantic in theaters of the 1950’s.  Heck, they showed a clip of 1955’s It Came From Beneath the Sea on a TV in one scene to remind the viewers of that fact.

Aside: That’s a lesson this film could teach the new American Godzilla movie makers.
Show clips of old monsters on tiny screen, and leave your monster ON THE BIG ONE.

Come on, you gotta admit, the Cab chase at the end is awesome, featuring a truly magnificent “only in New York” moment when the cast is arguing about the best driving route across Manhattan while being chased by a giant monster.

The big problem is the name carried (at the time) forty four years of expectations.

Some have suggested thinly veiled insults as alternative nomenclature.

Zilla – Toho themselves.
It’s a reference to taking the “God” out of Godzilla, after Showa and Heisei Era Godzilla performers lambasted the new take.

G.I.N.O. - Richard Pusateri of G-Fan Magazine.
It’s a reference to being “Godzilla In Name Only.”

Heck, I liked the movie and still came up with my own top ten list to make fun of it based on the old type B-Movies it shared so much with.

It! Conquered the Garden

The Lost Words:Jurassic Plot
(Not an old B-Movie, but it REALLY wanted to be one.)

Night of the Lepun Lizard

Attack of the Variable Sized Effect

The Thing From Another Movie

Toho Oh No
(No movie reference.
I thought it sounded like Yoko Ono.
Might be funny under the proper medication.
Nevermind.)

It Came From Beneath the Hudson

The Beast of Twenty Zillion Pixels

Notzilla (mispronunciation of the Japanese No-jira)
I thought this was an original one, but it’s kind of obvious and many other people have also had this “original” thought. I think the Japanese translation is all me, though I don’t know if I should admit that.

Honestly, I think the absolute best name and review came from a wise and wonderful far beyond his years Little Joe, Up the Lake one evening in the summer of 1998.

“Y’know, the movie itself wasn’t that bad, it’s just that he wasn’t Godzilla…
If they called it Godzilla’s Cousin Earl or something no one would have had a problem with it.”

Proof of this comes from the fact that the film was successful in countries where the original Godzilla films didn't have a wide release.

So why not give Earl another try?

After all, Earl was responsible for an excessively important part of the Godzilla Litany. 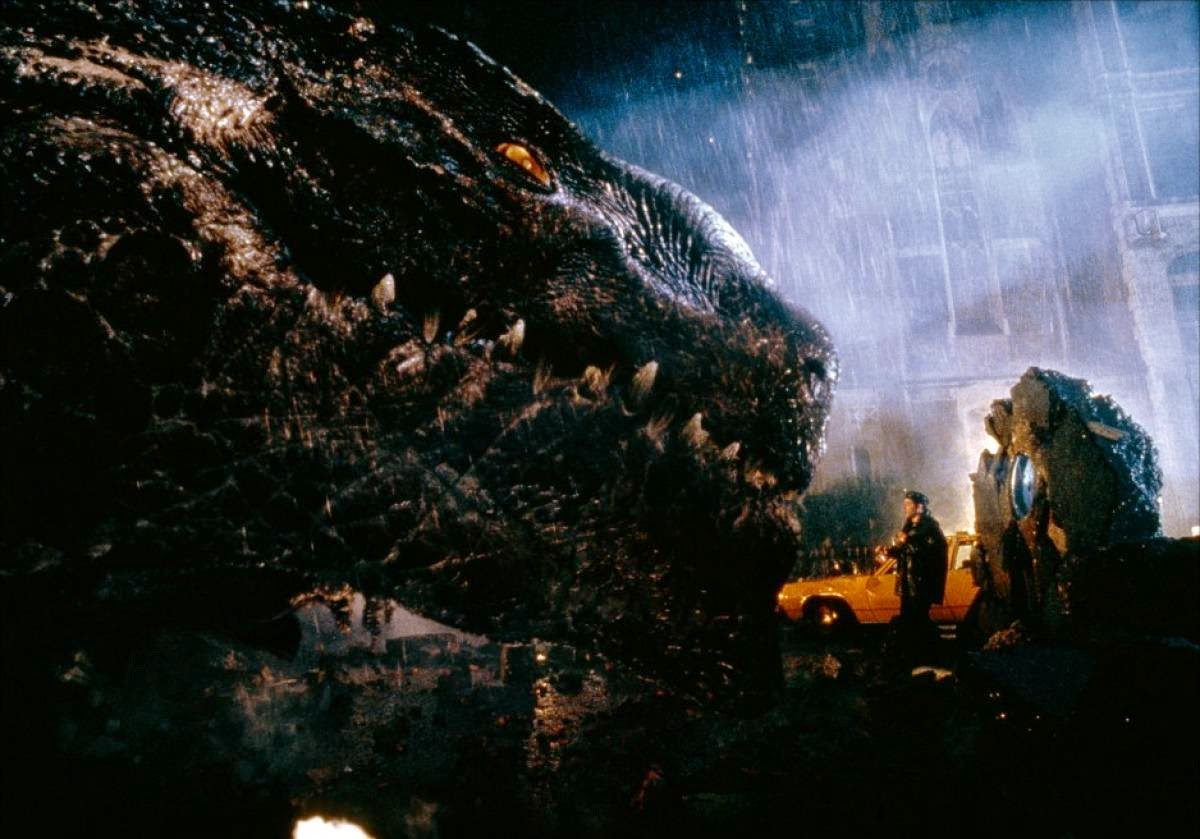 Due to their dissatisfaction with Broderick meets the Giant Iguana, Toho changed their mind about stopping forever after Godzilla vs. Destoroyah.

Thanks to Earl, in December of 1999 the Big G machine started up yearly in theaters again with the Millennium Series.

Click here to experience that giant pile of crazy.

She made me name you Earl.

Welcome to the small Venn Diagram that will get that reference.

Thanx for sharing, and making me blow cheerios out my nose.