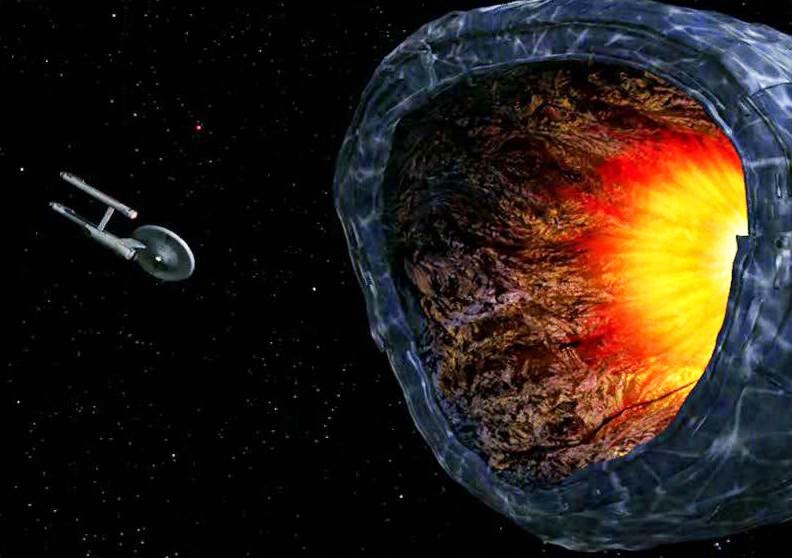 Here in the heart of classic Trek there’s yet another case of several star systems being destroyed before anyone notices, and a high level Starfleet Commander plummeting off the deep end after a bad command decision.  Someone needs to rewrite those rule books.

The enhanced effects certainly jazz up an already dramatic bottle episode.  Technically, I guess, it’s a two bottle episode, but they used the same bottle for each ship.

Wait, I dropped my metaphor.

Scotty is once more faced with an impossible task. This time it’s render a ship normally crewed by over four hundred to be pilotable by a single person.  His task must have been made more difficult by the fact that his entire team was comprised of command and science personnel, no engineers.

I wonder why he didn’t apply anything he learned to allow the Enterprise to be more efficiently handled by a smaller crew? 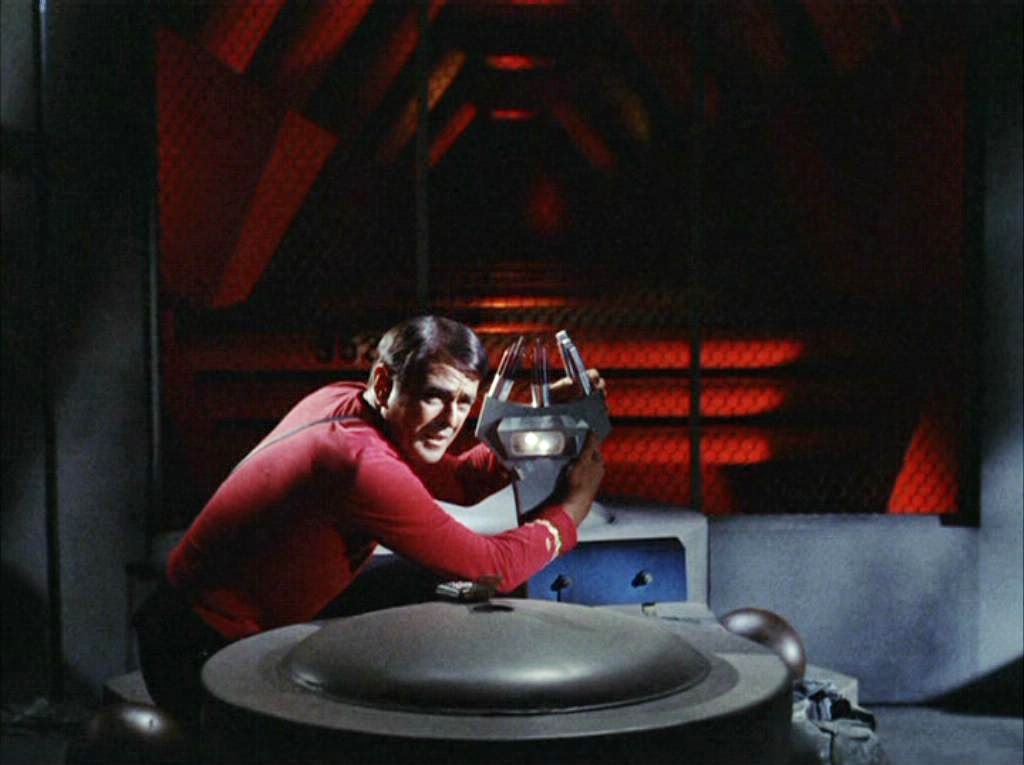 He must have wanted to save that information in case it was needed some day in an emergency…or a jail break.
“All systems automated and ready.  A chimpanzee and two trainees could run her.”

William Windom goes for broke as Commodore Decker, aka “Space Ahab.”  It certainly was cooler when every ship and Starbase had a different uniform insignia, wasn’t it?

Windom gets one brief, steely eyed and shining moment to show what Decker would have been at the top of his game.

After Kirk uses the USS Constellation to distract the death dealing pastry, the Commodore’s eyes clear, he sits up straight and exudes confidence and command as he barks orders.  I’d have really liked to see more of that, at least in a flashback, as opposed to his rapid return to buttheadedness.

Decker finally gets brought down and learns to never dare a Vulcan at the same time.  Spock pulls this off by stating that Vulcan’s don’t bluff, which is a bluff in and of itself.  The First Officer has learned quite a bit from his Captain, hasn’t he? 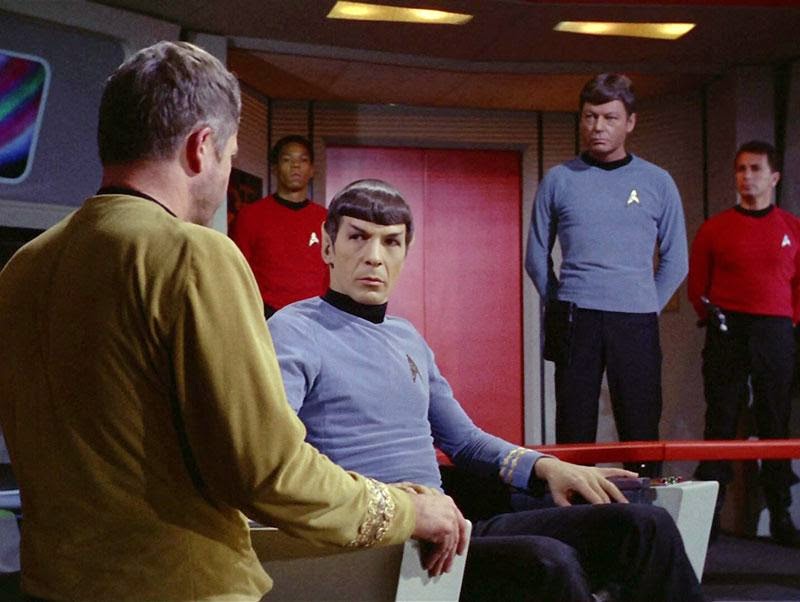 I would think Spock and McCoy watching him have a mental breakdown a half an hour before he took over the Enterprise would have been grounds for blocking that move, but when do Starfleet Regulations and Safety Measures make sense?

This trend continues as the known high ranking nutjob is assigned only ONE security guard. The Redshirt death parade has only started kicking into gear, surely they could have afforded a couple more?

Interestingly, opening the Shuttle Bay doors kicks in all sorts of alarms, but not in any way that can stop a launch, and powering up the shuttle itself raises no flags.

While the dramatic high point of the tale, Captain Kirk’s muted panic is strangely hysterical.

Many television series have received high praise for clever and entertaining Halloween episodes: The Simpsons, Home Improvement, Rosanne, even Happy Days got in a couple good ones.

Alas, Star Trek does not fall anywhere on that list.

Introducing the three witches may have fooled viewers into thinking they were in for another Shakespearean level drama.  Alas, again.

Sulu is in a landing party, and gets mind controlled once more.  No wonder he’s missing for much of this season. He probably hides in the botany lab whenever the planetary duty roster list comes around to his name.

The aliens have reality control powers enhanced by mechanical means, and Korob is both arrogant and fabulous.

In other words, he’s like Trelane (child), and Apollo (teenager).  Maybe this is the next phase of Charlie’s training.  Korob acts more like a kid pretending to be an adult than a real one.

References to beings from another galaxy tie these people (and Charlie’s non-corporeal teachers/ Trelane’s energy parents) in with the appearances of other races and items from beyond the galactic edge.

Also these beings need to tap into dreams and ambitions, which matches several powerful races, including the Talosians.  Sylvia’s reaction to Kirk’s “Mr. Smoothie” play is remarkably like Vina’s overtures to Pike.

Was Fleet Captain Pike left in the care of those helping humanity on the way to their next evolutionary level, or was he simple dumped off with the spearhead of an ultra-powerful extra galactic invasion force?

It can go one of three ways:
1)  Sylvia really is an evil alien, in control of Korob, and they are prepping to subjugate all humanity into docile stagnant worshipers, to provide them with emotional amusement replacing the feelings they’ve evolved beyond.
2) Sylvia and Korob are both being trained to become higher beings than their original human nature. He passed by showing compassion and she failed.
3) Sylvia, clearly more powerful, and less reliant on devices, is his trainer, intentionally playing “bad cop” in order to guide him into learning compassion.

When Scotty has joined Sulu’s mind control party, his missing middle finger can be clearly seen (or not seen) on the phaser instead of keeping it hidden as usual.  This is a missed opportunity to provide an in story reason to make Scotty’s past as awesome as the wounded on D-Day James Doohan’s was.

Lieutenant Desalle, assistant chief engineer, is placed in command of the ship while in orbit around Pyris VII, and does a heck of a job.  He’s well deserving of his promotion from navigator (coincidentally when he met Trelane) and provides proof that not only is the command crew of the Enterprise awesome, but they have a “deep bench” to use a sports term. The awesomeness exists at all levels in the crew.

I know I’m biased against them, but listen to Spock’s explanation of Sylvia’s alternate form:  “The cat is the most ruthless, most terrifying of animals…”

Remember that when we find out what he had as a childhood pet. I feel vindicated for my prejudice.

If you want to know how awesome Harry Mudd is, realize that he’s the only repeat villain in the entire Original Star Trek series. (Plus an animated appearance.)  I love this one, because when characters, stories and interactions have been developed and performed as well as they have, the potentials for comedy become amazing.  This is especially true with Spock around who, by design, is the perfect straight man.

Still with all the humor, the episode begins with a serious threat before the credits, and the danger remains believable throughout the entertaining silliness.  How perfect the tone matches the series is demonstrated by Spock and McCoy trading insults to bookend the start and finish of the adventure. 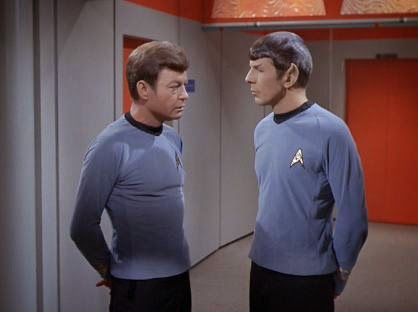 Both aspects are maintained during the adventure.  The scene following telling the Alices why they should leave, “because we don’t like you. Now boo boo boo booooop,” highlights the gravity and the comedy with the accurate running gag of being “in a lot of trouble.”

Hmmm... The makers of the androids were from Andromeda, and building the androids freed them.  Freed them from their bodies perhaps, to evolve to the next level? This may explain why abandoned high level robots and computers keep appearing on different planets.

These are some amazingly advanced machines, note how Norman can increase his density and compact his size when in combat.  (Either that or they used a stunt double a head shorter than the principal actor for no reason.)

Mudd claims it was luck that the Starship gotten was the Enterprise, but remember, everything Harry says is a lie.  He forged papers for Norman, which had to include duty assignment information.

By the way, isn’t it cool that Norman’s remastered computer tummy still has spinny things that look like a tape deck?  Also neat: most fake humans are detected because they don’t blink, Norman blinks more than usual.

Harry Mudd is a showman, and he needs an audience. He and Kirk share a great deal more in common than having a thing for robot women.
(Notice some of the lovely ladies he’s had programmed wear the same dresses “Mudd’s Women” did.)

Especially once it’s revealed Mudd really needs rescuing, who else would he call?

Kirk looks actually pleased to see him when they first arrive.  However, Chekov has no idea who Harry is, destroying any theories put forth that he was on board for Khan’s appearance and merely not on duty.

Why is Kirk pleased to see him? (Besides the similarity?) There’s the respect.  The Captain has stared down gods and talked self-aware computers to death.  Harry can shut him up with a sentence.

However, threatening the crew of the Enterprise is never a safe plan, and lining things up to make them stagnant and happy is something Kirk will never stand for.

Uhura waivers a tad, but immediately recovers and shows she’s stronger willed than every other female officer we’ve met on the Enterprise. 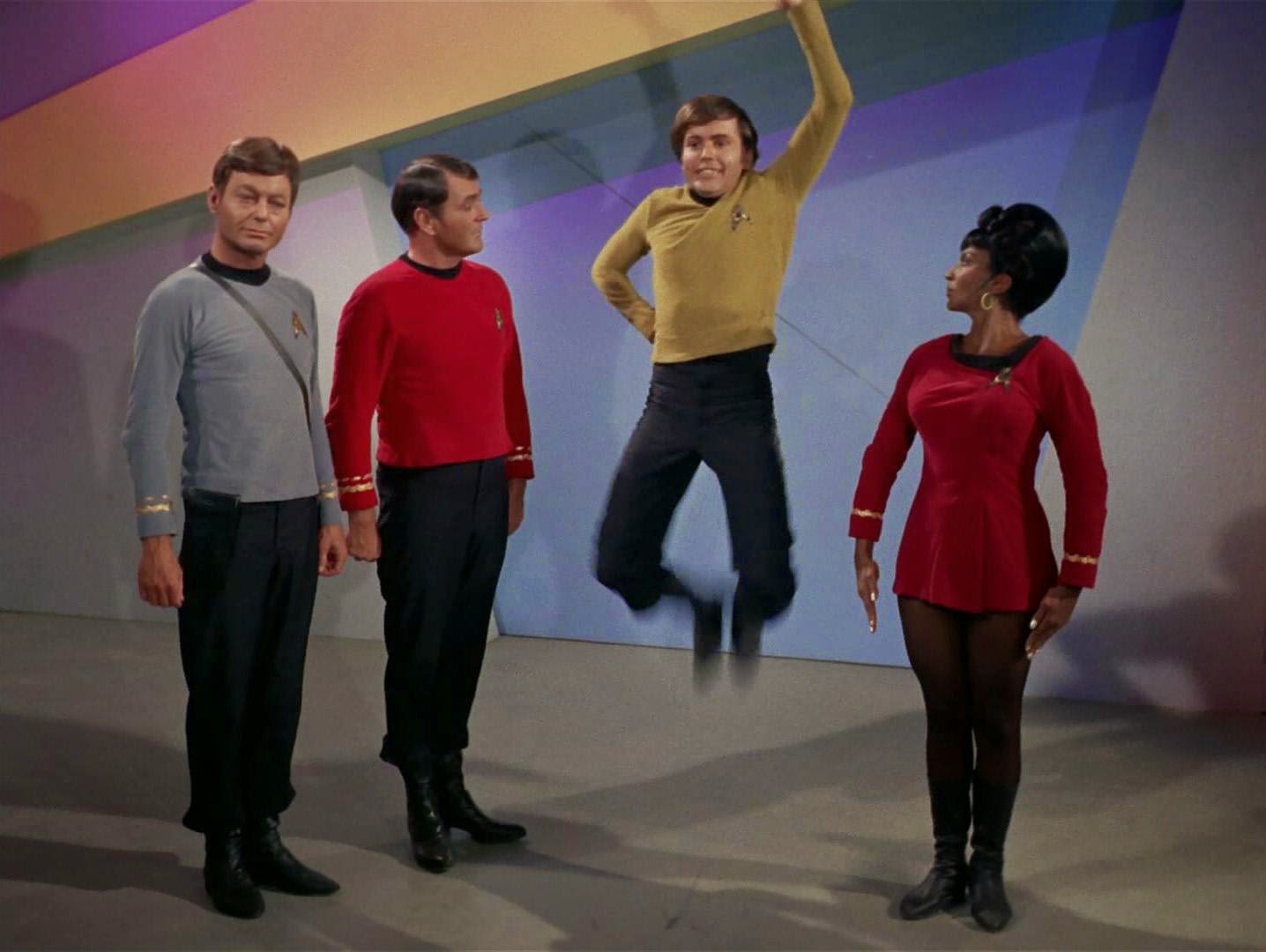 Kirk immediately figures out they can win the day through illogic. That probably explains why he can always beat his first officer at chess.  Even though the comedy flows freely, the ridiculousness builds “logically” through planning and command.

Remember, sometimes, “Logic is a little tweeting bird chirping in a meadow. Logic is a wreath of pretty flowers which smell BAD.”  Going down the rabbit hole isn’t natural for our favorite Vulcan, but when the Captain goes in, Spock leaps in afterwards feet first.

James T. Kirk and Harcourt Fenton Mudd teamed up together are a completely unstoppable force of nature.  They are also the most entertaining pair of hams in the galaxy.

“A sense of Enterprise” indeed.

Harry was more than ready to continue the partnership.

Silly man, you threatened the Enterprise, only bad things can come from that…