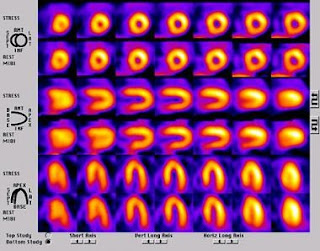 (Stunt chart, not mine)

Last spring everything checked out at the cardiologist.  He told me to track my blood pressure better for a while since it was up, but wasn’t overly concerned because all my other vitals were good. I told him I couldn’t get my weight down as low as I had before, but wasn’t overly concerned because, as Dad said, “Aging sucks but it beats the alternative.” Mostly, we were having our usual conversations about how advancing technology is changing the face of medicine.

I think he enjoys having a patient that actually listens to his directions as much as I enjoy having a doctor that isn’t rushing to get out of the examination room as fast as possible.

In between discussing “the biz” I was mentioning that I had been more tired and lacking in energy than usual.  The reason was likely that my work and hobby schedule had led me to give up sleep for lent.  However, since it had been a while since I had a stress test, and it would keep me from returning to my Fred Sanford impression every time my sore left shoulder hurt if I had a “clean one” under my belt, I inquired about the possibility of one.

We had one of our usual exchanges on the subject:

He pointed out I didn’t have the usual symptoms indicating he should prescribe a test, and I reminded him I didn’t have any symptoms the past two times the results of the test ended up with me in the Morristown Cath. Lab, with a new stent identification card in my wallet.

He suggested a regular stress test, and I reminded him I didn’t have any indications the past two times while running on the treadmill that I would need to end up in the Morristown Cath. Lab, with a new stent identification card for my wallet.

So he prescribed a nuclear stress test which I got pre-approved and scheduled for an upcoming weekend.

I showed up bright and early for my pre-test radiopaque dye injection that Saturday morning, my body purged of caffeine as required…
And promptly fell fast asleep on the scanning table.

The time passed similarly to my usual appointments, with him pointing out cool new technologies, except I was a bit sweatier than on wellness visits. He introduced me to “Periscope,” which is more or less the live video feed version of twitter.

He was discussing medical applications while showing me the gang of windows on his phone which included: in room musical solos, several lectures and classes, a soccer game in South America, and a guy driving down the street.

I noted the last one and said, “That’s safe.”  The doctor replied, “Let’s tell him,” selected his window and typed, “That looks safe.”  A moment later we heard the voice over of the driver say, “Yeah, it’s probably not all that safe, but the road is empty and I’m driving slow.”

Real time, multi user video interaction is here folks.  The technology classic sci fi showed as what video communication and two way wrist TV’s would be has arrived.   I’m sure it will revolutionize medicine once the masses are done using it to embarrass and incriminate themselves.

Anyway, I ran, he complimented my exercise tolerance, the tech injected more glow in the dark material into me, I fell asleep in the scanner again, and otherwise had a normal and happy weekend.

I didn’t get an urgent, “Can you be in the hospital tomorrow,” call, and I didn’t have the tech tell me, “You shouldn’t panic…much.”  Therefore I was in relatively good spirits when I made the check in call on Monday for the results.

That’s when I was subjected to a much longer version of a stress test.

The nurse told me the scan wasn’t completely normal and showed some occlusion, but was better than last time.

“Last time I needed a stent,” was my reply as my blood pressure suddenly blew the average for the month well out of the normal range.

She said the doctor would be in later that day and they wanted him to discuss it with me.

In spite of what must have been annoyingly regular phone calls, “Later,” ended up being about “Two Weeks Later,” creating what may have been the longest medically applied stress test in history.

(Stunt food, I did not steal my wife's sweet potato fries)

About half way through this period I rationalized, based on previous reaction times and the knowledge that if the doctor is busy calling sick people- you aren’t one of them, I was probably OK.   This rationalization didn’t completely stop the panic, because it’s me, but I decided to have my first rack of Friday’s ribs in five years anyway.

It came with rice and broccoli instead of the loaded baked potato I used to get when this was a more frequent meal.  That less cardiac friendly side is no longer available.

I still feel guilty about all the Bennigan’s that closed after I was forced to remove fried buffalo chicken with cheddar and Monte Cristo sandwiches from my diet.

(More stunt food, I can't even look at these anymore)

I figured the ribs were either a celebration of good health, or a drowning my sorrows for not doing enough.

Turns out it was a celebration (and a darn tasty one) as the eventual phone call from the cardiologist was a very short,
“Your exercise tolerance is awesome. You’re fine. Keep doing what you’re doing.”
(All highly technical medical terms I’m sure.)

It turned out the occlusion they mentioned is the 100% blocked but completely bypassed by natural collateral flow distal circumflex artery I’ve had since this whole coronary vessel side show began.

It certainly would have been nice to have that information before the fourteen day extended trial, but I’ll take some needless worry with a positive finish rather than the other way around any day.

The extension of the stress test didn’t end there, because I chaperoned the end of year band trip to Dorney Park.  It wasn’t the rides that provided heart pumping action though.

The busses were overloaded, or at least they were supposed to be. By the time I learned a space was available, I had already promised to drive three other parents. They, vastly unlike me, are far too mature to enjoy the shenanigan show a bus full of students puts on, and were happy to be in a “grown up” vehicle. (Although given my lunatic music selection and random toys in the car, “grown up” is probably a stretch.)

Trying to keep up with charter busses streaking their way diagonally across New Jersey beats any inclined treadmill test I’ve ever seen to generate an elevated heart rate and adrenaline level.  The cardiac loading didn’t end on arrival either.  Our group featured girls who supposedly wanted to try some roller coasters and then go to the water park.

That translated into my daughter and her friend wanting to go directly to the water park after a turn on the swings. Her friend’s mom took them, and I brought the others to the dry rides because I actually go on roller coasters.  However, in an effort to test my cardiac resistance to new heights, they did not.

Instead, they only wanted to go on town carnival spinner type rides like the Himalaya and the Scrambler. Not only does my Plavix reduced spin resistance no longer allow that type of ride in general, but the Himalaya, along with the similarly town carnival like tilt-a-whirl, are the only two rides that have ever made me actively vomit.
(I may have over adjectived there…I’m not sure one could “passively vomit.”)

This put me in the position of playing “fabulous human coat rack” to the girls’ pastel and spangle covered backpacks and sunglasses while they were mechanically twirled on multiple different small scale attractions.

I eventually resumed connection with my daughter and watched her enjoy some of the splashing fun, before engaging in hot pursuit of the busses once more to reach home.

Overall my health plan is working.  It was the first extensive time Up the Lake summer in years, with a minimum one mile, but usually two mile, swims per day.  My daughter and nieces usually joined me for at least a lap a day, extended the time of my exercise program considerably.

I’m sure repeatedly saying, “No, we can’t stop in the middle of the lake” and “No, I can’t carry you while I swim,” added a few calories lost as well.

My job also generated some extended swims.  A call in to a Risk Management meeting inspired an extra mile one day for a three mile total.

And a string of e-mails dealing with bureaucratic documentation themed red tape from hell led me to need a full four miles to calm down.

Although unlike the “Incredible Hulk” impression I did the first time I reached that milestone, this time it was more of a “dead whale on the beach” impression.

Did I mention aging sucks?

My weight did go up somewhat over the summer after dropping following the stress test. This was simply because I had the whole “Swim Laps to Cookies Eaten” ratio calculation off a bit.

However, I remain well into the healthy column. My follow up Cardiologist visit at the end of the summer had him tell me my BMI was still good.  Plus when he put his hand on my chest to position the stethoscope he said, “You’re kinda jacked.” (Which I also believe is a medical term.)

His advice as I left, besides the always nice to hear, “Keep doing what you’re doing,”
was a truly valuable suggestion for all with a health conscious mind.

Email ThisBlogThis!Share to TwitterShare to FacebookShare to Pinterest
Labels: A Carnivore’s Guide to Cardiology, engineering, Up the Lake

Wish I'd read this before having a big cookie for lunch
Glad you're doing okay.
That's in the running for best Jeff picture. I might photoshop a small leach on your calf to push it over the top.

Funny you should mention that. On the last swim on the last Sunday before school started, I had a leech on my calf when I got out. Tiny thing, bled a lot (as they do) except this time it left a nasty giant bug bite like sore that's still there....ick.

I guess that "I'm not a robot" button doesn't work.