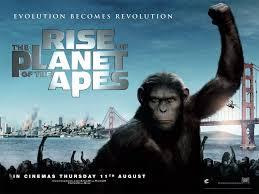 My daughter’s biggest complaint, as it normally is, came before we started watching.

“You mean we have to forget everything again?”

This time everything was well worth forgetting.  The people running the new franchise used three key assumptions that I, and countless other ape fans, figured out years ago.

1) If you make a film about intelligent monkeys taking over, people are going to say it’s Planet of the Apes, whether it’s intended as a remake or not.

The writers didn’t notice they were rebooting the series until half way through writing the script, but were smart enough to immediately grab the rights once they noticed the similarity.

Then, in a much more important “smart enough” move, they also put in all sorts of connections to the originals.  Some were references and tributes, like naming the Apes after actors from the older films.  However, the key ones were returning to social references and analogies, as well as a strong emotional base to create compelling characters and a story that had weight.

2)  Like myself as a little boy rolling around on the floor making monkey noises, most of the audience will end up rooting for the apes.  Those behind the story made this extremely easy.

With the single exception of John Lithgow’s tragic character, every human in this film, if not directly cruel, was either greedy, incompetent, self-absorbed, or overconfident to the point of endangering others.  Veterinarian Caroline was the closest to displaying purely admirable qualities, but her character still suffers via the sin of omission. Her allowing Will’s uncontrolled and unethical experiments to continue while doing nothing leads to the downfall of the human race.

Good thing we’re all pulling for the Apes…ook ook ook!!!

Though my daughter found the more realistic design of Caesar and his cohorts to be frightening, she was pulling for them the whole way. She cheered when they took out the opposition, and shed tears for Buck the gorilla and other oppressed revolutionaries who fell to the cruel human slave masters.

In fact, at the end of the film, she was clearly distraught and saddened.

This was not because of the new virus threatening to end all civilization.

It was because the star of the film had to explain to his Daddy he had to leave him behind by whispering a line full of deep feeling and meaning, “Caesar is home.”

The poignancy of that scene raises a crucial point.  I think footage of the making of these new ape films needs to be sent the Motion Picture Academy, and the members be forced to watch the side by side comparisons of Andy Serkis, Terry Notary and the other actors performing side by side with the finished film scenes.  Those images leave no doubt that motion capture is true acting, and the emotions, body language and expressions seen on screen come directly from the people being filmed.

Almost forgot the third one...

Now for then ending of the post quote reference:


The story, most impressively, roots the communication of the apes in sign language, which has many real world references.  Therefore this quote stuns the audience as much as the characters because there’s no real indication that Caesar and his budding revolution have any need for, or capability of, speech.  It once again comes from a first open act of defiance, in this case of a chimpanzee against humans. (Having be against Draco Malfoy made it that much better.) Awesomely, it uses the same word referenced from the classic films for that moment.

Always thought the apes should say, "Nuh-uh". Would be showing more humanity

True, but I think they were trying to show the Apes were classier than humans.