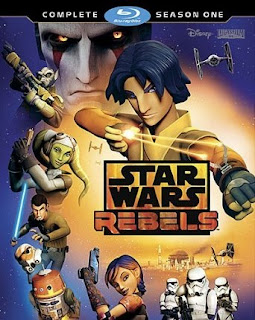 Ezra goes from being a loner thief and orphan to a member of the Ghost crew. He starts this by being accidentally kidnapped but proves his worth to the proto-rebels by giving a hoot and risking his own butt for Wookie slaves. Imperial Agent Kallus (and his sideburns) is the big bad guy at this point.  A holocron of Clone Wars Obi Wan shows up to keep fans of that show from freaking out that it was replaced by this one.

Crime lord Vizago shows up to kick off his variable friend/foe relationship with the Rebels.  R2 and 3PO also join in the adventure to remind everyone that with Disney driving now, everything will be connected in a controlled fashion.

The little boys of the family (Zeb and Ezra) squabble a lot, so Mom (Hera) sends them to find fruit for her.  They bond, start a running gag of melon jokes, and steal a Tie fighter.

Kanan gets a lead on Luminara and thinks she’ll be a better Jedi trainer for Ezra.  It’s a trap!  Not much of a surprise, since she isn’t a regular, but we do meet the Inquisitor.

5. Rise of the Old Masters

Ezra goes undercover at the Imperial Academy, and proves himself a valuable member of Specter Team.  Amazingly, they do teach marksmanship there.

Hera trusts “the boys” to fix the Phantom, and she and Sabine end up stranded on an old base surrounded by big monster things because of this oversight.

Some force training and back story for Ezra amidst and impressive showing of the Empire’s hardware on Lothal. That’s the planet most of this season takes place on. I should have mentioned that sooner.  The team then heads back to the base with the monsters, meets the Inquisitor again, and Ezra flirts with the dark side.

Kanan brings Ezra to a hidden Jedi temple where he has visions, gets a Kyber crystal, hears Yoda (Frank Oz, yay!) and builds a lightsaber/blaster hybrid out of components the rest of the team gives him…Awwwwww.

Multiple stings and counter stings with Lando Calrissian!  Azmorigan, (JAmes "Lo Pan" Hong!) the big bad gangster is based on an unused idea for Jabba the Hutt.  Now we know why it was unused.

Exiled senator intends to bring back story and rebellion information to Lothal.  Things go askew for everyone involved.

Kanan’s rescue involves deals with Vizago, joining the rebellion proper and the reveal of the mystery information source as an old friend.  The stolen TIE fighter makes a comeback as well.  The final battle with the Inquisitor turns out to be just the beginning of troubles as Darth Vader (voiced by James Earl Jones, Woo!) enters the storyline.

14. Rebel Resolve
15. Fire Across the Galaxy

Link to other seasons.