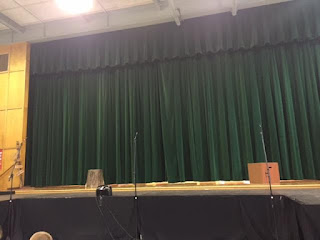 School play season has hit yet again. This year marks a major milestone as Anabelle performed her final time with this school before heading off to high school next year.

As usual, the season began with a viewing of the near professional presentation of Morris Knolls High school. 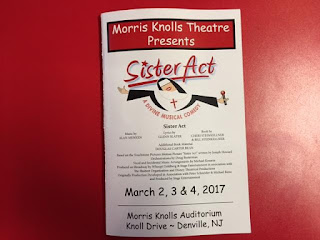 They put on Sister Act and, just like every other year, the performance was phenomenal.

Danceworks students stood out in the musical numbers, and once more, I found myself surprised at how funny some of these young women I’d only seen sing and dance in serious Moving Company numbers can be.

The adaptation puzzled me a bit.  Shows like The Wedding Singer and the selection Anabelle’s school did this year were based on films where I wasn’t a big fan of the kind of nasty edged humor to begin with.   They both maintained the overall arc of the original stories but added the grand production numbers, character introspection, and stronger emotional connections needed for a Broadway show.

I felt that while Sister Act did add those things, it also lost a bit of its core comedy.  The full impact of a formerly untrained group of nuns singing rock and roll gets lost when everyone on stage has been singing like that for the first act.

OK- The disco hobos scene was an impressive surprise.

Additionally, due to setting constraints of a play, it lost some of the message of the original.  That is: the nuns interacting with the world around them was as beneficial for the community as Dolores getting them to come out of their shells was beneficial for the nuns.

It was still a fantastic, hard to believe it’s a high school level show, worthy of buying the soundtrack.  However, the above observations led to my daughter calling me “The Critic” for the remainder of the weekend.

Between plays we caught another adaptation; Disney’s latest live action remake, Beauty and the Beast.  At the start, I felt my reaction would be:

After spending the next two hours laughing, cheering and crying out loud, I needed to reassess my viewpoint.

It isn’t a reimagining like Jungle Book was.  It’s not a straight retread either, though some of the recreated shots are breathtaking.

It also isn’t a film of the Broadway musical, though Alan Menken came in (with Tim Rice) for a second time to add all new emotionally charged songs that fit right in with the originals.  This is unfortunate as I thought it would be, which would make having in this post at all make much more sense.  Then again, its not like having coherent posts is something I achieve with any regularity..

It’s a retelling with a combination of some expansion and some retooling, to take advantage of what live action/ modern realistic CGI can showcase differently than hand drawn animation.

The emotional charges come in the scenes as needed, but are slightly shuffled to insure they can be carried by the different mediums' strengths.

I found it interesting that making Gaston more intelligent rendered him far more evil, while making LeFou smarter made him nicer.

Overall, it was an excellent month for movies about big, hairy guys who have temper issues covering over a soft spot.

Speaking of Disney, after Aladdin and The Little Mermaid, my daughter and many of her friends were hoping for a Disney Hat Trick.   Needless to say, they were disappointed when they saw this year’s selection was Shrek. 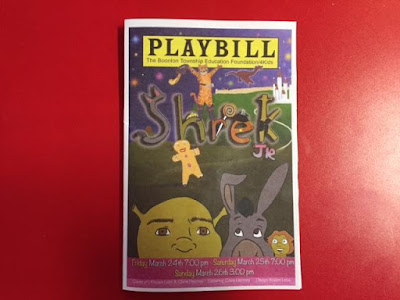 The disappointment spread in the school, with many students claiming they wouldn’t audition.

I kept advising her to be patient and see what it was like.  This is not due to liking the movie, or any knowledge of the play.  It came from knowing that Paul, the director they brought in each year, is awesome.

Paul’s son is the assistant director of the Knolls plays, which already made him awesome as well. This year he filled in as the Monsignor in Sister Act when the student in the role dropped out with less than two weeks to go, and put his awesomeness on display.

As they got into the insanely short preparation time (made insanely shorter by a couple of snow days) the quality of choice became apparent for two reasons.

A) Because the main crowd is “Fairy Tale Characters” there was a great deal more individuality to all of the roles, including the background ones, than having generic large chorus groups like most of the other plays they’ve put on.

B) The Broadway Adaptation sanded off the dated edges, then drew out the emotional cores of the film, amplified them greatly, and set them to catchy and powerful songs.

Final Thought on the Changes:

Having fart jokes in a Mike Meyers cartoon putting pop cultural references in a medieval setting is kinda funny.

Having fart jokes in the “Romance is Blooming” song of a Broadway musical is freakin’ genius!

The show itself was fantastic, if bittersweet, being Anabelle’s last play in this school.

No live show is perfect, but all the performers’ reactions to any of the small technical glitches showed their professionalism as they worked around them or incorporated them into the show.

Anabelle was able to use the musical number skills she learned from Danceworks classes to dance and sing along in group numbers as a dancing tree and a Duloc.  Using the stage presence skills she gained from the Moving Company also let her go full “Disney Face” for her Duloc introduction of the villain, as well as in her main role as Mama Bear. (Plus an uncredited appearance as a rooster!)

She not only nailed the dialog in the overheating fur costume, but also some solo singing for the first time on stage.

Additionally, it’s been impressive and fun to watch the other eighth grade class members who will be graduating with her progress each year as well.   Luckily, Pinocchio's musical comedy skills,  Gingie's ability to belt out tunes, the Dragon's voice having more soul than any middle schooler in the woods of New Jersey has a right to, and several others make me believe they'll be able to bounce back.  Because losing this Eight Grade mass of talent is bound to be a blow to next years productions.

Her two best friends were in the show with her again, both as Dulocs along with other roles.

Aliyah was also on stage with Anabelle as a tree, but her main role as the Wicked Witch showcased her deadpan and dark sense of humor, along with her experience in multiple non-school connected plays.

Kristen continued to showcase her impressive talents by drawing the cover of the playbill.  Additionally, she moved out from backstage to stand out in not one, but two singing roles as Mama Ogre and Peter Pan.

Speaking of backstage...  Matt’s credit list is the simplest looking, “crew” all four years.  However, based on the director’s speech, and more importantly hearing my daughter and her friends talk about him, that list fails to convey how much all the actors have come to depend on him to keep everything running smoothly over the years.

Josh grew his already impressive stage presence gained from outside shows.  Adding that to his perfect comic timing allowed him to own the role of the main villain Lord Farquaad.

She already demonstrated a beautiful singing voice in previous shows.  Caroline’s instincts and abilities have grown every year, making her a perfect choice for Teen Fiona, the most musical of the little pigs and a valued backup singer in just about every musical number that needed them.

I’ve seen some of these kids perform for more than the four years of Spring Musical.

Obviously the stage experience and training that we’ve seen Anabelle learning at dance helped her to shine, just like every other Danceworks student we’ve seen on stage.   Others I’ve seen in different places.

We’ve seen Nicole sing for scouts, talent shows and town functions.  Her voice has always been sweet and melodic, but this year she enhanced her ability to emotionally interpret lyrics and took a quantum jump in the amount of power behind her singing, stretching her range from softly carrying the tune, to belting out the crescendos.  She’s become a full on leading lady.

I first saw Brian and Jason do what was basically a comedy review when I juggled in Anabelle’s first or second grade class. The two of them rapidly switched from asking questions to telling me jokes and had me in stiches back then.

Jason’s comedic abilities have expanded every year he’s been on the stage, and his take on Donkey was positively vaudevillian (which from me, is a huge comedy compliment) he brought the funny in his expressions, actions and delivery.

Brian has added a wide range of emotions into his singing and performing over time, allowing him to carry the responsibilities of playing the lead and title character of Shrek…
But retained enough of his sense of humor to make the fart jokes work awesomely.

Actually, and unsuspectedly, Nicole nailed the fart jokes too, which nearly knocked me off my chair in hysterics.

I’ll close with a final proud father moment.  When the director gave each graduating Eighth Grader a rose after the final show, he said a bit about them.  He made it a point to take time to point out that Anabelle was a definitive team player helping out anyone where needed and keeping the overall show quality as her main focus.

I told her that made me far prouder than any compliment he could have given her performance.

Talk about additional benefits of the arts! 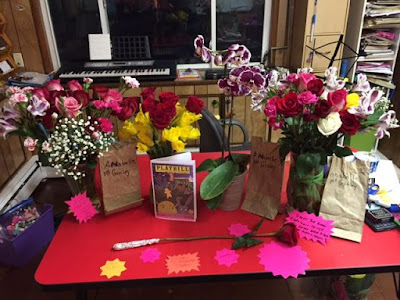 I have always loved the Middle School and High Shool Plays. The kids are amazing and have such enthusiasm. Yourcomments about the performances, brought back some wonderful memories. You should definitely be proud of Anabelle, she is a very special girl and I can't believe she'll be in high school next year.
Enjoy these years!! Cousin Maddalena

I am extremely proud, and am enjoying these years for all they're worth.
Thank you so much for reading and commenting.

If this posts twice my apologies. I love how you ended it. Great celebration of school musicals and Anabelle. I wish I saw you guys more.

Many thanx for reading and posting.

And Likewise, most definitely.


Great blog Jeff. I can't believe she's in the eighth grade! When in hell did that happen???

I have no idea. Its like she gets older every year or something.