George Awards: How Hangs the Hammer? 
And so, unbelievably, for the fourth time we have come to the end of the GeorgeAwards…

First we have a late entry for this year’s first list from a 2017 film that was both outstandingly hysterical, and also did a better job with some of the key character’s inner emotions and relationships than any other motion picture effort:

The moment is this exchange between Michael Cera and Will Arnett from Lego Batman. 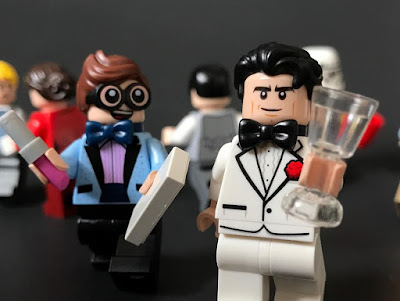 Wide Eyed Orphan and Soon to be Robin- “My name's Richard Grayson,
but all the kids are the orphanage call me Dick.”
Distracted Orphan Billionaire Bruce Wayne- “Well, children can be cruel.”

Also, since I just saw Clue (1985) for the first time in a while it’s as good an excuse as any to bring up Madeline Kahn again, if only to point out that her description of anger as Mrs. White that started with, “Flames…flames on the side of my face,” was an ad lib that none of the actors knew was coming which is why they are visibly trying to hold it together.

The line with relevance to this year’s George Awards, however, came earlier in her earlier exchange with Martin Mull’s Colonel Mustard:

Mustard- “You lure men to their deaths like a spider with flies!”
White – “Flies are where men are most vulnerable.”
Mustard – “Right!” *Pause for embarrassed realization*

More importantly I forgot the award for classiest person to use a Dick Joke in a movie.

The scene comes from the film  Arthur (1981) and is an exchange between Dudley Moore as Arthur Bach, who along with Peter Cook was one of the biggest influences on the Pythons after The Goons,  and Sir John Gielgud, masterful star of may plays in  London's West End as the long suffereing Hobson. 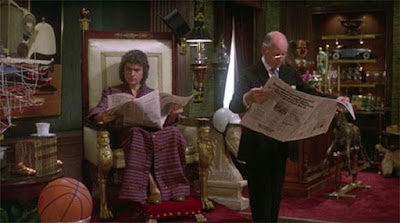 Hobson- "Perhaps you’d like me to come in there and wash your dick for you…
you little shit."


With the omissions out of the way, how about some special citations before shutting down?

Steve Martin is on top of the Dick Jokes list already.  Many of his other films also feature quality work in this area.

For example, the phenomenal and extensive string of better insults C.D. defines for Jim (Thom Curley) the jerk at the bar who called him “big nose” in 1987’s Roxanne contained a couple of gems.

“…Pornographic: finally, a man who can satisfy two women at once!
How many is that?
…
All right. Dirty: your name wouldn't be Dick, would it?”

Steve has been a master of these back to his earliest films, all directed by comic genius (and probably uncoincidentally Mel Brooks's longtime friend) Carl Reiner. 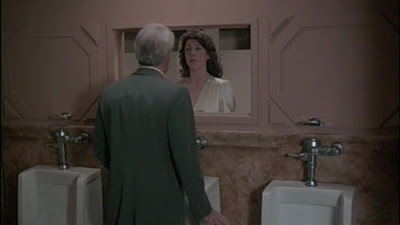 1984’s All of Me has two brilliant comics, directed by a third sharing a single body.  Roger (Steve) has half his body possessed by the ghost of Edwina (Lily Tomlin) and they have this exchange to work out the details of who is going to do what.

1983’s The Man With Two Brains:  a zany update to  Fifties medical horror films, with a pile of dirty jokes (quality ones though) thrown in for good measure.  As Doctor Michael Hfuhruhurr hanging a hat on “himself” as well as breaking a window pane due to frustration at having his sex life reducing him to yelling: 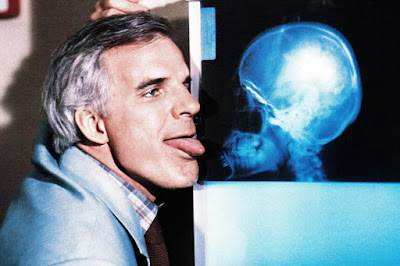 “I'LL HAVE YOU KNOW
THAT IN THE FINGER-SUCKING DEPARTMENT
I AM EXTREMELY SATISFIED.”

Rigby- *Gasp!* “What are you... doing?”
Juliet – “Adjusting your willie.
When you fell through the window it shifted out of whack.”
Rigby- “Thanks.”
Juliet- “You're welcome.”
Rigby - *Gumshoe narration*
“I hadn't had my willie adjusted like that in a long time,
especially without having to beg.”

1979’s The Jerk:  where Steve turned his already unhinged stand up routines into a semi-coherent, and even more unhinged narrative.  Navin R. Johnson and his enthusiasm over discovering his “special purpose” with Patty (Catlin Adams): 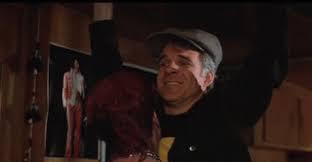 And then his report letter back to the family as read by his Grandma (Frances E. Williams): 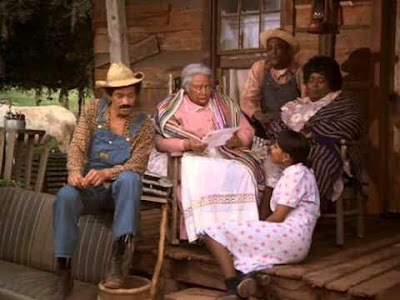 “My dear family, guess what?
Today I found out what my special purpose is for.
Gosh, what a great time I had.
I wish the whole family could've been here with me.
Maybe some other time as I intend to do this a lot.
Every chance I get.
I think next week I'll be able to send more money as I may have extra work.
My friend Patty has promised me a blow job.
Your loving son,
Navin.”

However, I am not giving Steve Martin a Special George Award for Dick Jokes in his films.  I am instead giving it for him managing to get one on national television during the time when Carson was king.

Ladies and Gentleman, the Great Flydini!

One final special award/ omission for this year not connected to any of the lists.

Instead it is to repair a gross oversight from the Special George Awards presented to my college chums last year. 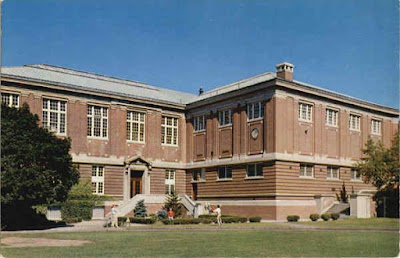 Jesse and I had fallen into officership of the RPI Juggling Club when we arrived at school, because there was only one guy left.  Jesse took President, I took Treasurer, and when that guy graduated, Randy filled in as Vice President.

Jesse was on co-op one semester, and due to a bunch of weird scheduling issues, and other clubs who didn’t fill out paperwork on time and angered the Union, we ended up trying to shift the night of our usual meeting, coming into conflict with multiple groups of combat minded individuals. Judo, fencing, karate…the beheading club.

We had to go have a meeting with the other club leaders and the Union Board to figure out who got the time and place: either us who filled out the papers properly and on time, or the combat club who didn’t, but had years of historical precedence.

Since there would be three officers from the other gang, Scott was coming with us. As we prepared to go he said:

And he was right…we got the room.

A couple of weeks into the semester, Jesse stopped in for a visit to a juggling club meeting.  Scott’s first words upon seeing him:

Scott- “Jesse, I was named Official Club Asshole in your absence.”
Jesse- “Um…OK. I didn’t know that was my title.” 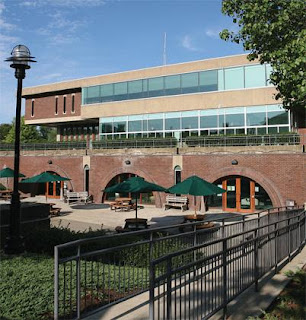 Shortly after that, the Union Board called a meeting of all clubs on a Saturday to go over all the different rules and budget and stuff. They required two officers from every club.  Randy had plans to go home that weekend, so Scott tagged along again.

The sign in sheet had delineated spaces, so we filled them out accordingly and signed them:

When the Union Board member collected the sheet, he stopped by us and asked with a suspicious scowl:
“What’s O.C.A.?”

In unison we professionally replied:

Therefore, for being formally documented in the minutes and notes of the RPI Union Board Meeting as the Juggling Club’s Official Club Asshole, I award Scott a Special George Award to close out this year’s ceremonies.


TheGeorge Awards will return…
Posted by Jeff McGinley at 2:00 PM