A Real Truth, Justice and American Hero
or
A Ruthless, Superstitious and Cowardly Terrorist Lot 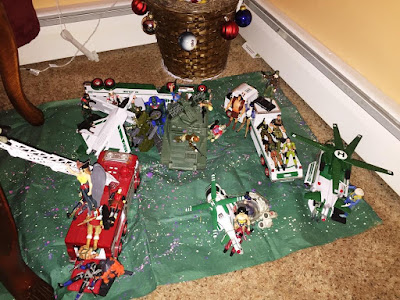 Last year, with the help of the crew of the USS Enterprise, and mythological creatures from the Omicron Delta System (The famous Shore Leave Planet), the Joes looked to be heading for an easy victory.

Unfortunately, when the Federation team was summoned back through the wormhole, without Spock’s Vulcan telepathy and the unspecified powers of the Mule with a Hat in the loop  to control the robotic creatures, Cobra scientist Doctor Mindbender was able to modify Doctor Venom’s Brainwave Scanner to command the monsters, inflict heavy damage and sweep the G. I. Joe force off the plateau.  Disconnected from their home dimension’s power source the beasts eventually shut down, but not before leading to a staggering Cobra victory.  The terrorist forces were poised to deliver one final and crushing blow to the Joes.

In other news, I believe I am still over thinking reasons for why one group or the other is on top of the table each year.

Down at his base camp, Wild Bill is attempting to get the injured Gung Ho and Sergeant Flash of the Joe Heavy Weapons Squad out of the "Helicopter Evacuation Service System"  in order to fly back up to the plateau for another rescue sortie.  Beachhead and Roadblock have already been off loaded to the G.I. Joe Command Truck, which has been turned into a makeshift recovery center for the wounded.  Lady Jaye, and Flint were already convalescing there after pulling the mobile command base back under oppressive fire, both of the automatic weapon and dragon breath variety. 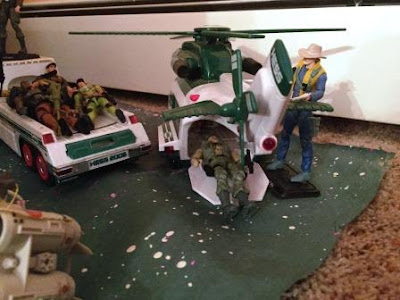 Hey, it's a static diorama; of course the most exciting action took place in between Christmases.  I barely have the time and patience to get everyone in position…animation is not an option.

As the evil forces of Cobra moved in for a final triumph, a new group detecting the G.I. Joe team’s desperate signal for help through the dimensional wormhole came to their aid.

Because once again for this type of film, only my family (and FunnySteve) seemed to have really enjoyed new Justice League movie, and even I have to admit it was light years behind both Marvel Films and DC Animated Universe quality. Therefore, I’ll have to write my own story about these heroes. 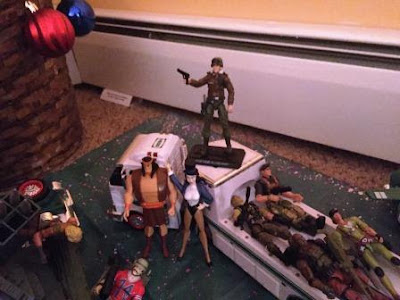 Since Anabelle claimed the “High-Speed Extra-dimensional Search Ship” this year, navigating the dimensional breach is managed through a combination of Zatanna’s backwards spells and Apache Chief’s shamanic magic.  That’s why the Justice League people are all slightly larger than they should be compared to the Joes and Cobras.

That’s my story and I'm sticking to it.

General Hawk is giving them full details of their defeat to allow the super heroes to telepathically relay the situation through the Martian Manhunter for the rest of the League.

Speaking of J’onn J’onzz, before anyone realizes that line was there because I left the bag with the little walkie-talkies in it downstairs… 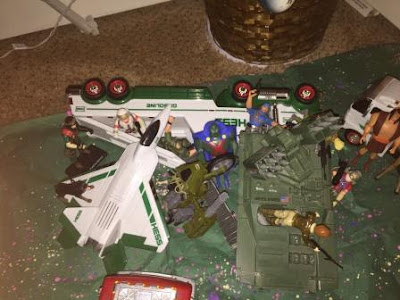 The Manhunter has phased through the rubble of vehicles tossed off the plateau by the mythologically enhanced Cobra forces and is lifting the Wolverine Missile Tank, RAM cycle, and "Hiss Elimination Sky Striker" launch craft to rescue Bombstrike, Cover Girl, Ace and the always disco ready Shipwreck.  Bazooka is trapped under the rubble as well; he must have crawled from his recovering Heavy Weapons Squad allies on the Command Truck to help out and got caught in the equipment avalanche.

Or I dropped him and didn’t see him until after putting the vehicles down.
Oopsie.

Mutt and Junkyard are helping the search through the wreckage to sniff out any unconscious victims that J'onn's telepathy couldn't pick up.  Whatever his “Martian Vision” powers are have changed so often, it’s easier to let the dog help than remember if he can currently see through metal. 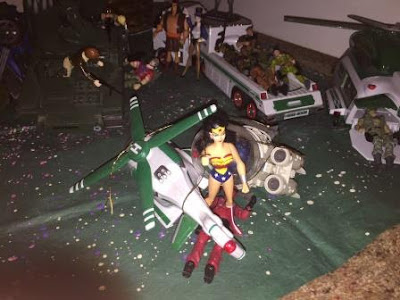 Wonder Woman has put an end to any Cobra air superiority by yanking down the Trubble Bubble with its Televiper pilot and Wild Weasel in the “High-altitude Escape Suppression Strafer.”   Her combat skills and the power of her Golden Tassel Lasso could not be denied. 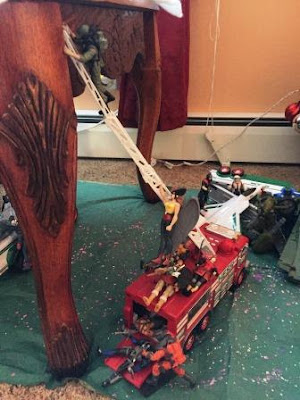 Barbecue is using all of his EMT training while his fire truck has been turned into a field hospital.  Sprit, Jinx and Scarlett are awaiting treatment atop it for relatively minor injuries.  Hawkgirl has been carrying down the Joe Ninjaish fighters with the help of Spirit’s eagle Freedom.  Barbecue is working feverishly, tending to Snake Eyes wounds as he held the Cobra troops at bay while the others were evacuated in yet another exciting battle I’m not showing you.

The ICU inside the truck is occupied by the guy known as Quick Kick, Nunchuck, or Billy from Predator.  Whatever that figure's name is, since two of those three are long dead, his odds aren’t good.

Breaker is atop the ladder relaying information to…
Nobody, because I forgot the walkie-talkies.

So let’s just say he’s less injured than the others and is climbing down on his own, OK?

Up on the edge of the plateau Sergeant Stalker is putting field dressings on the rest of the Heavy Weapons Squad, the appropriately named Heavy Duty and the awesomely named Rock ‘n Roll, to get them prepped for evacuation. Maybe he’s coordinating with Breaker to let Hawkgirl know who to grab next.

Or Breaker picked a really bad time to do his step aerobics training. 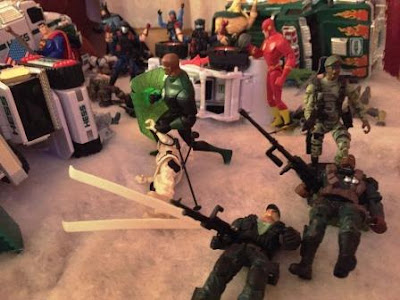 Seriously, HESS, how about a little more variety?

John Stewart (no not the Daily Show guy, this Green Lantern, keep up) constructed a shield to deflect a blast from the Cobra Claw firing the U.L.G. and sending the Uncomfortably Large Gun’s projectile hurtling back at its source, taking out the Claw, the C.S.P.s, and their handlers Scrap Iron and Snow Serpent.

There’s a couple of Vipers, Crimson Guardsmen and a Cobra Bazooka trooper standing around the battlefield surrendering for some reason. 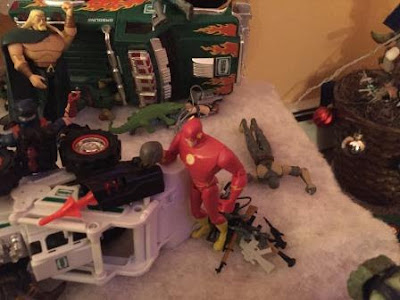 That reason would be the Flash racing through the entire plateau and stealing the Cobra troops’ weapons at super speed. WOO!

Zartan and the Dreadnocks decided to taunt Aquaman about the uselessness of the King of the Sea’s powers in a land based combat situation.

Yeah, that went well for them. 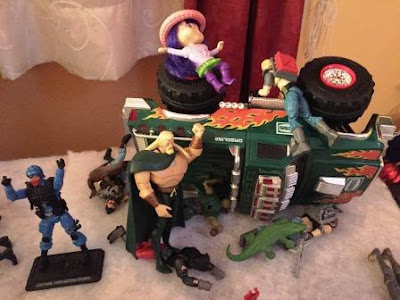 The start of their embarrassment was Arthur upending their Swamp Truck with the super strength of  his bare hands, while deflecting attacks by Buzzer, Ripper and Torch’s chainsaw, blade and flamethrower via his hardened to withstand the ocean’s depths ultra-dense skin.   To add insult to injury he used his aquatic telepathy to get the inexplicably appearing large monitor lizard (the closest living relative to the oceanic prehistoric Mosasaur) and Croc Master’s own aquatic pet gator Señor Twinkles McFluffernutter to join the fight on his side.

Hmm...The inexplicably appearing large monitor lizard is an out of place animal always showing up near some form of frozen water.

Perhaps a certain pair of twins from the planet Exxor have been activating their wonder powers to gain recon information for the League all this time?

An ever growing group of friends family and co-workers each year mercilessly tells me they’re looking forward to the new village, with no regard for my personal need for sleep. This forces me to dig further and further into my personal brand of insanity and what can only be described as a dangerously large collection of action figures for what is now ten consecutive (plus an old one) Christmases.
Therefore, I do not feel the need to explain why Zartan’s daughter Zanya smells like fruit anymore.

Clearly the Justice League is more powerful than anything the Cobra army has faced before.  However, a successful counterattack could be possible, since the greatest hand to hand combatants their armies and allies have to offer have combined in an end run attempt to sneak attack their assailants. With the element of surprise, surely Firefly, Storm Shadow, two deadly Battle Android Troopers and Generic Cobra Ninja 57-B will be able to inflict some damage on even the strongest… 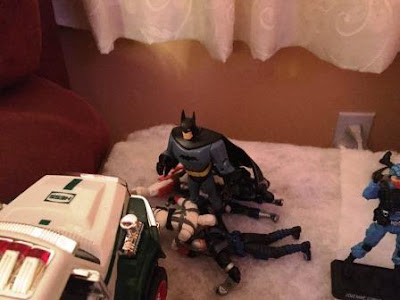 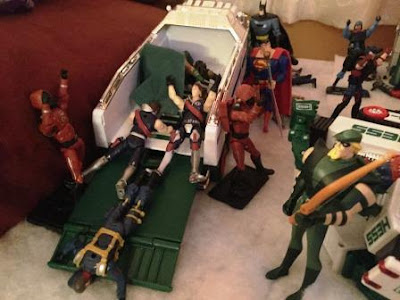 It’s being upended, unceremoniously dumping out Serpentor, Major Bludd, the Crimson Twins and Cobra Officer Bertram to be captured by the trick arrows of, and chastised with the “running dog fascists” speeches of Green Arrow.

Black Canary is not with him because she is using her canary cry to modulate the vibrations of the dimensional wormhole from her side to allow the magical energies to pass through, since I never was able to find her figure that wasn’t marked up eight hundred percent.

The unceremonious dumping of the Cobra Command Verhicle is being performed by Superman himself, after rescuing the fallen Duke, and righting the American flag Duke bizarrely always carries into battle. 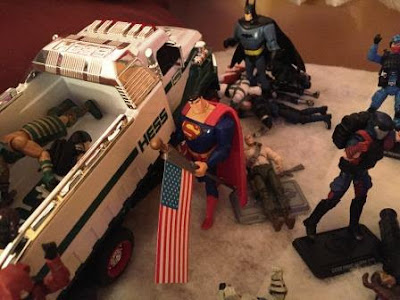 Because he’s Superman!
Feel free to take a moment to hum the John Williams theme to yourself.
I know I am…
Pretty much constantly, in fact. 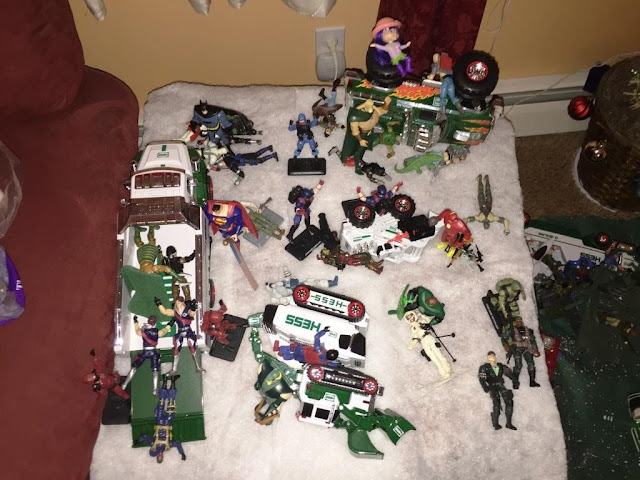 But wait, why aren’t Cobra Commander and Destro in the command truck?

Because they’re meeting in a secret cave under the plateau on one of Destro’s transport trucks along with an Iron Grenadier and the Baroness, neither of who can ever stand up unsupported. (This has no bearing on the story, but I haven’t made fun of crappy Spy Troops figures in a while.) 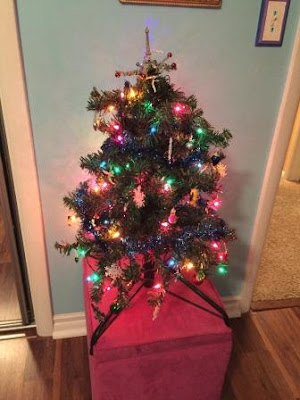 Well, that box of figures isn’t getting opened this year.  Nice tree though, kiddo.

As I was saying: 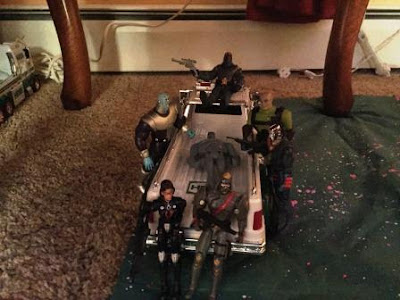 Using Kryptonian technology the heinous and evil Lex Luthor and Brainiac have arrived to combine their knowledge with Battle Android Trooper workings and create a new Amazo to battle the League!  As can be seen in the distance on the left, Destro has brought an extra supply truck to insure all robotic equipment possibly needed is present.

Or maybe I forgot about a Hess truck under the couch and couldn’t rescue it without knocking most of the Battle Village over.

Tune in next year to probably see the aftereffects of the Amazo battle instead of the action, unless I hit the lottery and buy a stop motion effects studio.

But definitely tune in next week to see what is apparently a new tradition in our home, my daughter making fun of me and my holiday obsession in a parade format.

As a preview, instead of using it as one of the many figures she campaigned to get into the village in her parade, she hid this particular Brave and Bold Happy Meal toy in my set up pile.  When I discovered it and didn't use him she took to placing him in various rooms each day to stare me into feeling guilty about the omission.

Most families have an "Elf on the Shelf" this time of year.  We have: 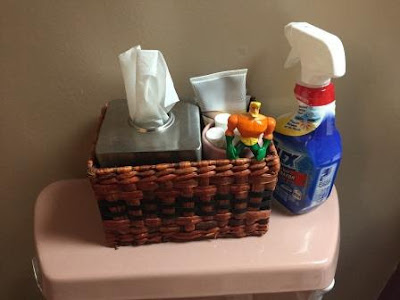 "Aquaman in the Can"

Next week's post will be chock full of more of her humor at my expense.

Gather festive feelings from the far reaches of the globe for the merriest forces of good ever assembled, dedicated to truth, justice, Merry Christmas and Peace on Earth for all Mankind!


(Yes, I hum the Super Friends theme constantly as well.) 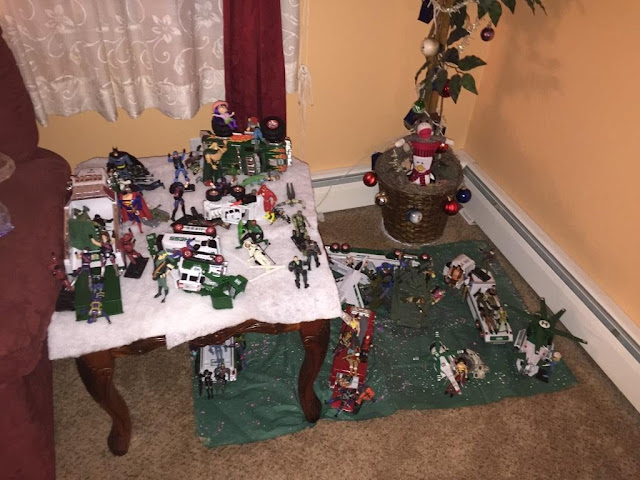 
A note important to only a few.

It is fitting that Post 719 is both superheroes and a family based holiday!
Posted by Jeff McGinley at 2:00 PM