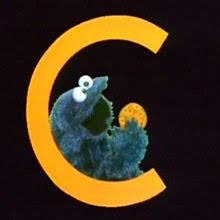 The above concept came from Danger after hearing “C is For Cookie.”

It was during one of our occasional all night all request shows on WRPI, when, as usual, we teamed up with Death and Danger who hosted the show starting after Laughter Hours at 1:30 in the morning.

After playing Cookie Monster’s magnum opus, a song that my daughter has referred to with, “Isn’t that your jam?”  Danger- co-host of the show and also front man of the band “First to be Last” who was totally robbed at the GM week Quad battle of the bands, went into his explanation.

“Cookie Monster- Master Philosopher:
He knows who he is, and what his place is in the universe is.
Y’know, him, cookies…and that’s it.”

I believe Cookie Monster is the key representation of the downfall of Sesame Street going from a show created by comedy writers, and then having educational content added, to a show run by psychologists and marketing, attempting to be entertaining.

The reason this is a problem is that by ensuring entertainment first, it insured the kids' focus attention and involvement, which all but guarantees a greater likelihood that what is being taught will be absorbed and retained.  Read Street Gang, it really is all Barney's fault.

The start of this was probably 1987’s “Healthy Food.”  While Frank Oz performed the heck out of the RUN DMC inspired number and it was fantastically executed, it started down the path we’re at today.

Yes, I was one of many members of my generation who would bang his head on a toy piano after seeing Don Music. 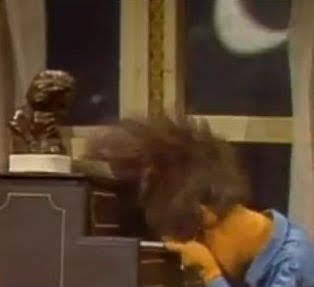 But it wasn’t out of self-destructive behavior; it was an attempt to recreate a successful comedy bit.
No one I know, including myself ,employed an impact hard enough to damage either keys or noggin.

Cookie Monster was a successful and lovable character BECAUSE of his flaws.

He also served as an effective teaching object lesson:

If you only eat cookies, and keep them all to yourself, you will look like a blue misshapen blob with googley eyes.

The humans on Sesame Street were fully realized characters; the Muppets were exaggerations, providing lessons in that manner.

And sometimes, providing comedy alone as a space to highlight the learning.

I know whoever handled the puppet at the time…

Yes, it's a puppet.  I’m restating that Muppet performers are far more than the voice. It’s different than cartoon characters where the animator (or animators) puts as much personality in as the voice.  Watch Muppet Treasure Island.  Frank Oz did the voices of his characters, but Kevin Clash did the puppetry. Even with guidance from and the read through recordings by Oz, there’s something a little…off, in how they move.  Look at current videos of "Cookie Monster,"   even his posture is off.

To continue, whoever it was said, “Me not changing my name to Brussel Sprouts monster anytime soon.”

But it's a far cry, far less funny, and far less memorable than, “C is for Cookie, that good enough for me.” 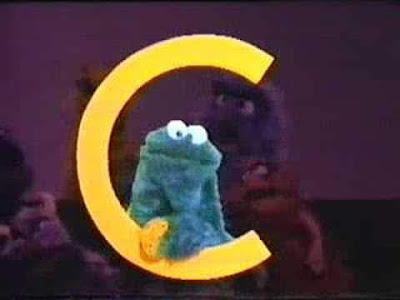 SO TRUE and So Sad that it is true. What children learned on the
original Sesame Street and what they got out of it is nowhere
close to today's Sesame Street.
My children and their friends loved it and watched it constantly.
My grandchildren tolerated it for a little while and then gave up.
My feelings, from what I hear from other Grandmothers, are echoed
constantly.

Thank you so much for joining in. Sorry you had to go through the "not a robot" gauntlet.

Some issues are too important to keep quiet on.

Pretty sure I got fairly close to head injury with that gesture. The fact that I can't really remember is disturbing

" A cat will always blink when hit with a hammer. It may be a very long blink, but if it opens its eyes again, it counts as a blink. If it doesn't open its eyes again, chances are you hit it too hard." - George Carlin.

Thanx for playing the home game!

I'm sorry but I can't really comment on this post. You see, I have never watched one episode of Sesame Street. I confess. I don't know when it started. However, I'm sure I thought I was to old to watch it. Probably old in age numbers but young and immature enough to have at least watched it once or twice but, I guess I knew it all back then. (Yeah, sure!) I should have at least promoted it to my own children but my oldest was hooked on "Barney" and my youngest was hooked on "Blues Clues and Dora, the Explorer." I do know some of the characters from the Macy's Thanksgiving Day Parade like Big Bird. I recently heard Big Bird retired. TV commercial ads at Christmas time trying to sell "Tickle me Elmo." Don't know about Ernie getting tickled. So, "SHAME THE HELL ON ME FOR NOT WATCHING SESAME STREET!" I know it's an American Icon and viewed all around the world. Everyplace but my house. Apologies to all SS viewers. I feel as though I missed something!

Its an age thing, you're older than me. I came in when it first started, and by the time you had kids it got a lot more mediocre. Youtube some of the early seasons for awesome 70's music and amazing Muppet comedy.