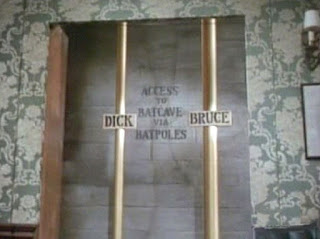 On William Dozier’s opening narration about cheering the heroes and hissing the villains:
“Welcome to Batman… time to hiss!”

On the grave focus of the Commissioner as he describes the need to use the Bat-phone.
“He’s certainly dramatic.”

On the initial reveal of the Bat-poles.
“Um…they have names on them.”

On the premier of Caesar Romero based on “The Joker’s Utility Belt” from Batman 73 in 1952.
“They should show this in theaters instead of the new Joker movie.”

On Zelda's thugs hiding in the caskets shooting each other:
"WHAT!  You said the only person who died was 'what a way to go-go!'"

On anytime Alfred wears his green apron:
“Off to work at Starbucks!” 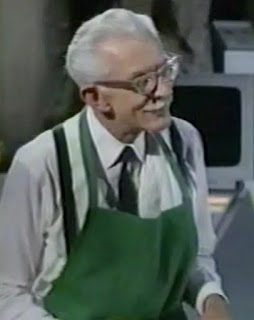 On Alfred offering Bruce iced tea after his run in with- and freezing by- Mr. Freeze:
“Oh, the sass...Alfred is my favorite person in the show…except maybe the Riddler. ”

On the fact that the show being originally watched on tiny, often black and white, screens could hide substitutions and similar effects much better than a fifty inch high definition screen:
“Batman has a hole in his suit.” 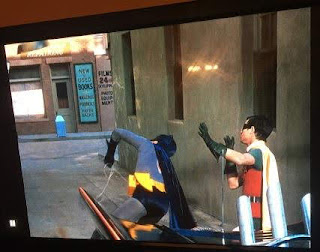 Similarly, it makes it easier to notice when Robin suddenly turns into a forty year old man during the fight scenes: 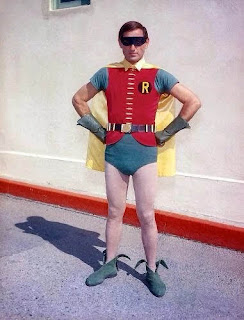 “Who’s that?  I shall call him Ernesto.”
*Every subsequent fight*
“Get ‘em Ernesto!”
“Yay, Ernesto!”
“Oh no, they captured Ernesto!”
Etc. 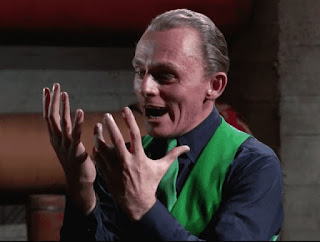 On Frank Gorshin’s character defining menace and glee as the Riddler:
“I feel- if you’re not that excited about being a criminal, you’re doing it wrong.” 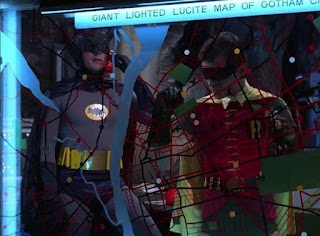 On Batman placing the first two points of the Mad Hatter’s crimes on the Giant Lucite Map of Gotham City:
“It’s a hat.”
On the points turning out to, in fact, make the shape of a top hat:
“I am a goddess!”

Aside:  An up the Lake Joe’s cousin, and the only boxer that experts believe should have beat Rocky Marciano on points, Roland Lastarza played a hat-henchman. (On the right)  Cool! 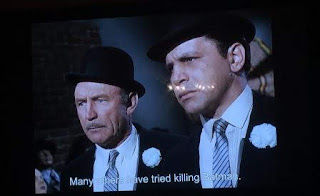 On one of the other criminals leaving a clue about the number twelve, and Robin yelling out guesses like “donuts” and “Amendments.”
“Good thing they’re not facing the Riddler this time.” 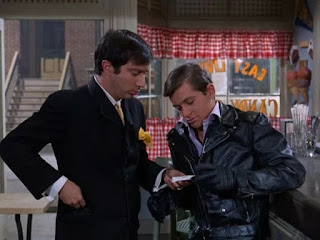 On Dick Grayson trying to infiltrate Joker’s school aged gang by wearing a leather jacket and smoking:
“He put the cigarette in his mouth backwards…I just can’t with him.” 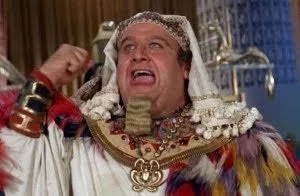 On Victor Buono cranking up the overemoting light years past even Frank Gorshin’s range:
“I now have a new goal if I become a criminal.” 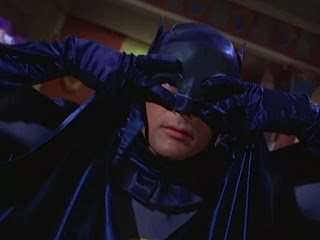 On the batusi returning in a longer form:
“He’s dancing again. Oh dear Lord he's still dancing. It’s all the moves from the end of the cartoon, I thought they made those up.”

On “Aunt Harriet” being captured and suspended over a trap with a sack on her head being a foot taller than usual with twenty year old legs:
“Another stellar use of stunt doubles there.”

On Batman saying the sensation of his knock out Bat-gas is not unpleasant:
“Batman gasses himself?”