Mastered by the Universe

I had many writings planned out to work on one evening after I finished some chores.
Then, either the very rotten branch that fell on my head bounced onto the ground yellowjacket nest, or I coincidentally hit the nest with the weed eater when surprised by the blow.
Either way, yard work sucks.
And yes, I should have a camera crew follow me around since my life  has gone beyond simply providing comedy material and now often resembles episodes of Mr. Bean.
Therefore instead of my planned writing activity I watched the released first part of the initial season of Kevin Smith's Masters of the Universe Revelations. 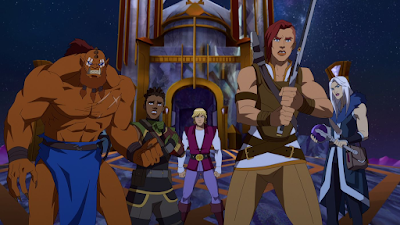 And it was entertaining. Woo!
I do know there were changes, and for once, I don't care.
First of all, I have no emotional connection to the old series. It came out when I was fifteen.
It isn't that I stopped watching cartoons by fifteen.
Hell, I still watch old and new cartoons at fifty-one.
I liked the original mini-comics that came with my cousin's action figures where He-man was a barbarian caveman with a huge axe.
The show kiddified the story a great deal, adding in the Prince Adam transformation part.  It wasn't anywhere near G. I. Joe or Transformers levels of awesome, and I ignored it.
But that's not the reason I don't care about the changes.
Fans wanted a return to the same He-man stories they remembered but with more "adult" violence.
You got that, in the first episode.
It barely sustained twenty-five minutes worth of story.
Instead the show went in different directions afterwards giving Teela a hero's journey story, and delving further into Evil-Lyn 's personality in ways that used Kevin Smith's strengths:
The ability to dig deep and use a huge amount of elements and a massive amount of characters from  a franchise.
The contacts to have an amazingly awesome voice cast.  (Sarah Michelle Gellar as Teela, Henry Freakin' Rollins as Tri-Clops!, Mark Hamill, occasionally riffing on Tallulah Bankhead, as Skeletor, )
Humor ranging from low brow to extremely witty.
Introspective monologues and dialogues to put some thought between the jokes and action, providing emotional connections in the most unexpected places.  (Orko!)
Fantastic father/ daughter moments. (A newer one for him.)
Having it all backed by a fantastic Bear McCreary score was a cool bonus.
As the tale first unfolded, I thought a comparison to "The Death of Superman" arc would be appropriate, since removing the main hero from that story allowed a detailed analysis of his importance by showing the effect on all those he left behind...
Except that isn't as relevant to the Masters of the Universe story.
In truth, with the enormous array of weirdly designed and powered characters on both the good and evil sides of this franchise, I am sorry to say that, in the cartoon, He Man is the dullest character in Eternia.
We got five fun, action packed episodes and a huge cliffhanger promising an excellent second half of the season.
Bring it on!
Embarrassing admission- I was today years old when I realized the symbol on He-man's chest harness is a letter "H."
Final note- checking to see if I got rid of the whole yellowjacket nest the next day, I discovered the final section of weeds I had cleared with the eater revealed some poison ivy. 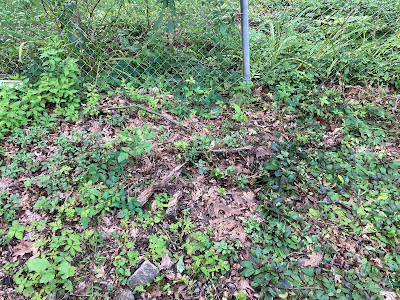 That sounds terrifying and painful. And did you end up with any poison ivy as well?

We ran into some Bear McCreary yesterday. Saw the movie Freaky and then learned (via the credits) that he was the composer.

I associate Masters of the Universe with my younger sister. She and her friends were into it. Like you, it definitely wasn't due to my age that I didn't get into it.

I'm fine, thank you, the branch was very rotten so it disintegrated on impact, and I only got a couple of stings (I've stepped on many nests in my Up the Lake youth that this was definitely a mild one.) No poison ivy either, I learned a lesson a while ago and wear thick pants and shoes when weed eating.

I think my lack of connection to the franchise is why I enjoyed the new direction so much. For a change I could view something like this at face value.

Thanx again for your concern.