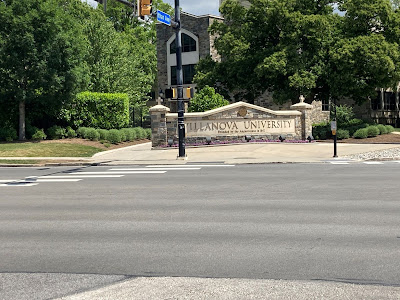 The college search is stressful for anyone, and having it happen during the last year added insane amounts of anxiety to the pile.
Anabelle had multiple colleges on her list and (he added proudly) was accepted by almost all of them.  However, likely increased by the crisis, she always seemed to be put off when talking about any of them, trying to avoid thinking about the life change as much as possible.
We’d visited another school three different times and it seemed like she was forming a connection.  Then we visited Villanova for a tour followed by virtual meetings for accepted students a few days later.
On an evening shortly after that, she regaled us with a detailed lecture about how Villanova was excellently set up to offer her exactly what she wanted in her dual major with the Chemistry and Education departments working seamlessly together.  They would allow her to reach all her academic goals within a four year time span, and have a direct connection to a fifth year Graduate school program, while allowing her to continue performance, not competition, based dance.
In other words, all that time she looked like she was paying absolutely no attention to her surroundings, she was completely immersed in them and making detailed mental notes.
When I was a lad, this type of behavior drove my parents crazy on a regular basis.
Karma- right across the old noggin.
Now that she was committed, we figured she should probably see the University again in that light.  We had talked about tourist trips to Philadelphia several times, with little things like family obligations and a global plague getting in the way.
With restrictions lifting, and vaccinations gotten, we took the opportunity to combine the two, and booked a couple of nights in the Best Western in King of Prussia, Pennsylvania.
Due to her commitment to Danceworks always being an unbreakable oath and it increasing exponentially as she neared the end of her time at that amazing dance school, we planned to leave after her night class on Wednesday to get an early start and stay through Friday.
Links below go live weekly as they post.
Yes, I’m cheating by splitting days across two posts, we haven’t gone anywhere in forever and I need to fill space.
So there.
Day 1
Day 2a
Day 2b
Day 3a
Day 3b
Posted by Jeff McGinley at 2:00 PM

Email ThisBlogThis!Share to TwitterShare to FacebookShare to Pinterest
Labels: travelogue

I'm so excited that there are going to be more travelogue posts!!!

I can relate to the not-talking-much-about-college stuff. We had a lot of that in our household, and it really stressed me out. I kind of forgot about it until reading your post.

I am very much looking forward to the rest of the posts in this series.

Thank you, it was nice to get out for a bit.

I learned I missed writing these after a long stretch of not doing any.

I think every kid has their own way of freaking out about college, but usually the excitement eventually overwhelms the fear.

Though I haven't lived there for 30 years and have trouble convincing older South NJ relatives to cross the river when I visit for the last 10 years, I'm mildly offended that I wasn't consulted prior to this trip.
I could've told you what is and isn't worth a Cardiac Cheatday Chit at the original Termini Bros and what isn't; that the armor collection and Prometheus Bound at the Art Museum are Jeff-compatible; that it's called "Pork Roll" not "Talyor Ham". I'm veritable fount. A FOUNT, I SAY!

We would have consulted you, but we ended up doing more than we originally thought. The college visit was key.

We were just going to hit the Liberty Bell and Betsy Ross house, then things shifted and we improvised a WHOLE LOT.

We did see those things in the museum though.

Thanx for the offer, we'll consult before the probable future visits.

Congrats Jeff. I can't believe Annabelle is going to college. Wow, did I feel old reading this.

Thank you.
So you can guess how ancient I feel.