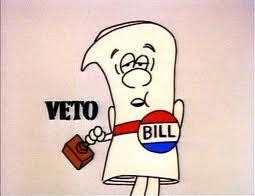 
References:
I may be subconsciously repeating things I heard/read by three other straight guys that opened my mind to the idea that you don't have to be part of a group to have empathy, especially when the crappy feeling being given a hard time for acting or thinking differently than the "main crowd" is something everyone should be able to relate to:  George Carlin,  Peter David, and Mark Evanier…If you’re gonna steal, steal from the best.
Posted by Jeff McGinley at 2:00 PM

Jeff, I like the post and agree that everyone has the right to be married, but it should not be decided by a representative government or popular vote. It should be decided by the judiciary. This is a civil rights issue and the law has already been written in our constitution. It is up to the courts to interpret it as such. After it is settled in the courts our elected officials can pass legislation that cements the rulings of the judges. As an example I would use Brown V. The Board of Education in the mid to late 50's followed by the civil rights act of the early sixtys. Nick

That does make a lot of sense. Really as long as the decision is given to professionals instead of "the mob" it should work out. Thanx for reading, and commenting.

Result: In two generations there will be no more liberals.

That definitely boils the issue down...

What issue, I have no idea, but it definitely boils it down.