The first Ghost Rider movie displayed a level of insight bordering on genius.

This was a remarkable accomplishment for a movie that patently stupid.

The intelligence of the film had nothing to do with the plot, character development or acting.  It instead came from the breakthrough realization that after years of appearing in Marvel comics of varying forms, power sources and motivations, the only thing Ghost Rider has going for it as a concept is:

“A guy with a flaming skull for a head on a burning motorcycle looks cool.”

That’s the entire core of the character.  Ghost Rider’s been around over thirty years (and that’s only counting the motorcycle version, not the older cowboy all in white).  Through overstock Marvel Essentials and quarter bin purchases (sense a trend here?) I’ve read every issue of Johnny Blaze’s series and most of Danny Ketch’s.  I can confirm what others have said, that there has never been a story that could be called the definitive or ultimate Ghost Rider tale.  Instead of trying to recreate something that clearly didn’t exist, the movie creators grabbed whatever elements could enhance the overall coolness of the imagery from different versions.

They also threw in the rider’s maniacal laugh from all versions, villains that blend elements from both Johnny’s and Dan’s runs, and some mysterious western elements from Carter Slade (the original Western Marvel Ghost Rider) for added coolness.  Then the film topped it off with some excellent casting choices.

Face it, putting either Peter Fonda near a motorcycle, or Sam Elliot in a cowboy hat automatically exponentially raises a movies coolness factor.  This time, they both scored extra ultra-bonus points:

Elliot for playing a character partially based on the Caretaker in the Dan Ketch comics, who was originally based on Sam Elliot!

For the ultimate finishing touch, they combined all the coolest elements of Marvel Ghost Riderdom with even cooler non-Marvel Ghost Riders, namely David Mann’s Ghost Riders painting, and a more metal version of Stan Jones’ “Ghost Riders in the Sky,” for a midnight ride that pegged the coolometer well past the awesome mark.

The movie also realized something else.

“A guy with a flaming skull for a head on a burning motorcycle is completely ridiculous.”

Instead of the common cowardly Hollywood choice of trying to tone down the more insane elements of the comic book world, Ghost Rider went for it full bore.  The motorcycle that defied physics, the bystanders’ reactions, and the emotional expressiveness of the skull all played nicely into the lunacy.  And to top it all off, they let Nick Cage run amok throughout the film in a full on Elvis impersonation. (Just because Johnny Blaze’s stunt outfit was based on the ’68 Comeback Special’s leathers, I don’t think the comic creators meant him to talk that way.)

With this combination of visual coolness, suffused with unhealthy levels of ridiculosity, Ghost Rider, for me anyway, was a heck of a fun time and a wild ride.  While no means a hit, it had the additional effect of bleeding into the Ghost Rider comics.  Way’s and Aaron’s runs on the 2006 Ghost Rider series brought in as many combination elements as the movie did and then some, making for a set of over the top, wild looking, crazy-ass, supernatural action stories.

The film that pioneered this concept had just enough success to double its budget and generate a sequel.

Unfortunately, it also had a studio more afraid to lose the character rights to Marvel Studios/Disney than they were of the side effects of rushing a cheaply made movie into production to meet the legal deadline.  Therefore, they put out a film made for about half the cost of the original and only doubling its budget again, netting half the profits.  This lackluster performance meant one badly timed virus made me miss its entire theatrical run.  (Marvel themselves helped by cancelling the new female Ghost Rider series to coincide with the movie’s release.)

Any review must wait for the home video release.  Meanwhile, I’ll have to be content with the comics, the first film, and the ultra cool dining room centerpiece (A Halloween present from my wife and mother-in-law several years back.) 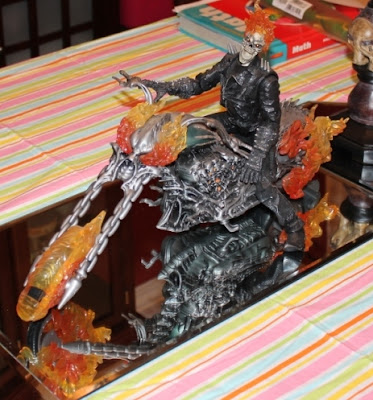 You should see how she decorates it for Christmas.

I've seen the awesomeness of how she decorates it for Christmas. Perhaps if the studio followed her example the sequel would have lasted in the theater longer.

And unlike Mel, whom few cared about when he was "Without a Face" Sam Eliot exudes a cool sexiness even with his head on fire.

Thanx much. Maybe they will and we'll get the Ghost (Rider) of Christmas Future.

That's some special "cool sexiness" to work through having a flaming skull for a head.