Yes, Gianna, There is a Batgirl. 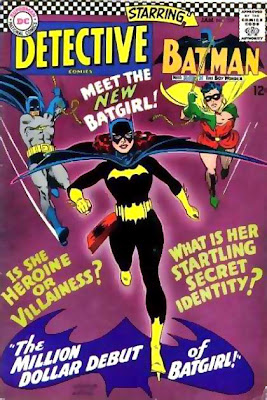 I take pleasure in answering thus prominently the communication below, expressing at the same time great gratification that its faithful author is numbered among the friends of a geek like myself.

“I am 7 years old. My little brother says there is no Batgirl -that she’s only made up for girls who want to play Batman.
Mama says, "If Jeff says it about comic books, it's so."
Please tell me the truth, is there a Batgirl? “
Gianna

Gianna, your little brother is wrong. He, and others, have been affected by the over political correctness of an oversensitive age. They do not believe in the interesting potential of franchise expanding characters. They think that the reasons for creation of a character always overwhelm the development by storytelling that follows. All super heroes, Gianna, whether they be leaders or sidekicks, are derivative. In the great Comic Book Universes, every idea has been tried before; it is the execution of those ideas with intelligence and heart that creates a worthwhile character.

She exists as certainly as the Bionic Woman, Xena Warrior Princess, and Nancy Drew exist, and you know that they have been around, and providing entertainment to at least as many, if not more, people as the male heroes that they were spun off from.  Alas! How dreary would be the world if there were no Batgirl! It would be as dreary as if there were no lightness to the Batman legend. There would be no Batmite then, no Adam West series, No Brave and Bold musical episode.  We would have no fun side of Batman, only darkness and tragedy.  Without that fun side, the joy of the character that makes him loved by children the world over would be extinguished.

Not believe in Batgirl! You might as well not believe in Batman himself. You might hear that Batgirl started as only a female shadow of Batman, but even if that is true, what would that prove?  No character comes from nowhere.  Batman was an urban version of Zorro…and Zorro was a western version of the Scarlet Pimpernel.  Batgirl may have begun solely as a brand extension, but that’s no proof that she is not valuable.  The most important part of a character is not why it was made, but what was done with it in the narrative that followed.  The most real parts in the world of comic books are those that come from intelligently written dialog and plotting that neither marketing nor advertising folks can conceive or imagine.

You tear apart a character based on her reason for introduction, but there is a veil covering how those characters can take on a life of their own and evolve into something greater.  Batgirl has begun as so many things, which then grew to beauty and glory beyond:

An extension of providing a family dynamic that grew into a sassy individualist:

A need to fill a gender role for TV that grew into a triumph despite disability: ﻿﻿

A fit for a darker world that grew into a symbol of overcoming a dark past:

Initial failed attempts at heroism that grew into success and valued acceptance by team leaders,﻿﻿:


And currently - a lesson in the ability to recover and move beyond past traumas:

Only in superhero tales, the modern American mythology, can these symbols shine brightly through years of development for children everywhere. Ah, Gianna, in all of geekdom there is nothing else that creates a stronger character reality.

No Batgirl? Thank God she’s chronicled and will be chonicled forever. A thousand retcons from now, Gianna, nay 10 times 10,000 retcons from now, she will continue to appear in all Batman related media to make glad the hearts of little girls. 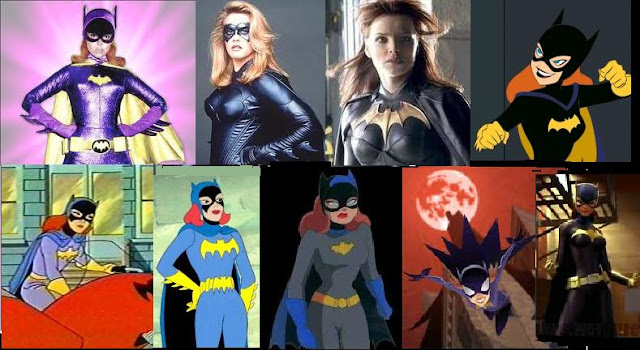 P.S. Apologies to the New York Sun, Santa Claus, and anyone named “Virginia”.
Posted by Jeff McGinley at 2:00 PM

Reminds me of when I chastised a female Twilight fan, "*Real* vampires don't sparkle!"

Longbow: See this post for confirmation of your statement - http://dogfoodforchairs.blogspot.com/2011/05/draculas-on-parade-or-ultimate-sucker.html

Neat post! :) Next time, though, all you should HAVE to do is show her a clip (maybe the 7 minute Batgirl pilot?) of Batgirl, and ask her how, if she's NOT real, did they catch her on film? ;)

Thanx much! That would normally be a brilliant idea, if my head wasn't the strange place to live that it is. The comic characters are the real ones, the live action footage is just someone dressing up as the characters. (Yes, my head is a nice place to visit, but I wouldn't want to live there.)