Now that Disney owns Lucasfilm there will be changes to the beloved franchise that will make Greedo Shooting First seem like the most brilliant and bold choice in cinematic history. 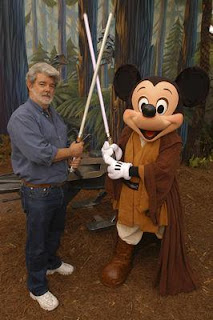 10.   The original symphonic music will be replaced.
The new score:  John Williams conducts the Fantasyland Sax Quartet, accompanied by the Dapper Dans.

9.  Jedi Mind tricks are reduced from controlling the weak minded to making them,
“Think of a wonderful thought…any happy little thought”.

8.   In order to prevent confusing the live action CGI enhanced Star Wars with the company’s computer generated Pixar films, all new digital actors in Star Wars will be stylized and based on technology and characters from classic Atari 2600 games.

7.  The costume designer from Shake it Up will be used.
The next generation of Stormtrooper armor comes with rainbow laced converse high top sneaker boots.

Prominent droid characters will be a geodesic sphere communications expert- C-MNS1, a yellow and red image recorder called KO-DK and an accounting specialist that only works in RPN named Aich-Peepio.

5.  The force ghost of Yoda's first lesson to the new crop of Skywalker kids,
"Always your conscience be your guide let."

3.  In order to extend their lightsabers, Jedi must first say:
"Bibbidi Bobbidi Boo!"

The amazingness that is Pixar came out of Lucasfilm.

Disney bought Marvel without destroying it, and those movies still rock

This is the company that owns Phineas and Ferb. Check out "Nerds of a Feather"...they know us well.

This is the company that created the amazing world of TRON, and also brought it back years later: newer, cooler and shinier.

This is the company that put a Mortal Kombat fatality in the opening scene of the Thanksgiving release family cartoon, the completely nerdtastic Wreck it Ralph.

They know how to cater to, and delight, geeks of all ages.

Darth Maul and Palpatine were both dispatched with Disney Villain-esque plummet out of sight deaths.

There’s a ready made spunky princess with authority issues.

And everyone’s parents are already dead or evil in the Star Wars Universe anyway.

Y'know, if it wasn't for Star Trek and Warner Brother's owned properties (Looney Tunes and DC) now my entire Christmas tree would be owned by Disney!

I cannot think of a better way to mark my 200th post than celebrating the merger of two companies that have given me giant amounts of entertainment throughout my life.

This pile of awesome must be cannon!

Jedi Ewoks would be doubleplus awesome with whipped cream.

Well, yes. But it would certainly annoy the fanboys.

Many thanx! I guess that's appropriate, at midnight I turn into someone unconsious on his keyboard, in a pumpkin like state.

All of these are perfect but my real gut splitter was on number 7. Rachel spent a full month and a half going through the entire Netflix library of that show. I thought it would never end.

You poor man. Thanx for sharing your pain. I know there's more recent singing Disney stars, but Threepio strikes me as a Hannah fan for some reason.

Thanx Kiddo! Looking forward to sharing the new movies with you!