Lord of the Rings Through a Kid's Eyes: Part 3

RETURN OF THE KING 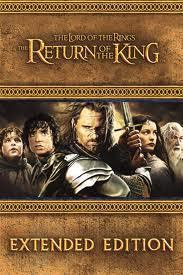 With a two week break instead of the one week between parts one and two; my daughter started off resistant as ever to watch the finale.  Then, of course, she zombified to focus on almost the entire four hour film. The one odd exception was she ignored much of the first half of the Battle of Minas Tirith.  Too much going on all at once I guess.

The gap apparently made her forget about some minor details:
Why are the trees groaning?
Who’s the King that’s returning?
How old are the Elves?
What’s that big eye thing?

Since she replied to each answer with, “Oh yeah.”
I’m betting it was due more to her third mode of watching the film than actual forgetfulness.

You see, my daughter basically had three modes of viewing during the last movie.

The first was being savvy enough to predict or at least immediately follow what was supposed to happen:

Many times when she knew a rescue, return or revelation was coming, she would count down, “Three…two…one…” and point to the screen.

She managed to keep track of each group by referring to them as, “Aragorn and Friends,” “Frodo and Friends” “Gandalf and Friends” etc. At least until they all met up again in Gondor near the end.

Saruman’s extended edition plummet off of the tower, to be impaled on a spike (appropriate for Christopher Lee) and then dragged under water, led to the matter of fact color commentary:
“Well, he’s definitely dead now.”

While my daughter was in full knowledge and acceptance that Eowyn kicked some serious evil butt, she also thought the Witch King and his “nunchucks” was cool but very dangerous and concerning.  Though when he proclaimed, “No MAN can kill me,” she jumped right in:
“She’s not a man!  And neither Is Merry!”

Before the Elvish archer’s trick with the Mummakil, she recognized the look in his eyes and asked:
“Is Legolas going to be awesome again?”

She was also in tune with the story enough to expect and predict the arrivals of both Sam and Arwen after the gang was back together once the ring was destroyed.

However, after Aragorn’s coronation, she seemed puzzled. I tried to explain everyone was bowing to the Hobbits, but she understood that.  She instead pointed out:
“Everyone should be bowing to Sam…Frodo screwed up at the end there.”

We both agreed, however, that Sam would never tell anyone…because he’s that awesome.

The second mode she watched the film in was being emotionally caught up in the roller coaster ride of the story:

Merry and Pippin’s return was greeted with a resounding cheer, as always.  Although the mention that they were cousins earned a puzzled, “Seriously?” Again, I found it amazing how many layers from the books that have creeped into my head over time aren’t as clear in the films.

Another example:
She let out an impressed “WHOAH!” upon the reforging of Narsil into Anduril.  My daughter and wife both expressed surprise that the Elves made it, requiring another pause to explain what is obvious in the books, but much less so on screen, that the Elves made all the magical weapons.

Arwen’s apparently imminent death led to a primal scream. While a happier scream was used for more color commentary when the trebuchet fired:
“AAaaaaaaaaaaaaahhhhh!  SPLAT!”

She already wasn’t too happy with Denethor, but when he was trying to burn his son alive, she started yelling at the screen:
“NO! Faramir’s not dead!”
This was followed by a loud, “YAY!” upon his rescue,
and a quiet, but decidedly nasty, “Cool,” when the Steward performed his flaming, screaming swan dive.

The king’s charge - leading the Army of the Dead off of the ships - brought about an emotion filled cheer:
“YAY for Aragorn and friends!”

She absolutely reviled The Mouth of Sauron - another magnificent addition in the Extended Editions.  Although it was not because he was pure evil and capable of slaughtering masses.
No, she really hated him because he lied, specifically about Frodo being “dead and tortured.”
She also became very concerned for Gandalf when he stared mouthing off to the villain, asking:
“Is he gonna die again?”

Her hatred of Gollum made her pretend to be disinterested in the section of the stories involving him.  However, when Frodo decided to put on the one ring inside Mount Doom, she let out her own BIG “NO!!!!” that rivaled Sam’s.

She was also kind of upset at Frodo leaving on the ship to the West, requiring the last of many explanation filled pauses.

The third, and probably most common mode of watching, was my daughter doing things primarily to drive me crazy:

When the heroes embarked on the Paths of the Dead, she informed me that, due to his reluctant and cranky bravery, Gimli was “exactly” like Stuffy in Doc McStuffins.

Finally, when the undead leader emerged, in a scene that raised the dramatic level of the film and Aragorn’s journey, she took off again:
“Oh…Apparently, the dead has a king.  And he is ugly, ugly, ugly…”
Then continued to tell me how ugly he was after asking me to pause the film to explain what was going on.

Frodo’s attack by Shelob caused her to attempt to give me a biology lesson about the inaccuracies of the scene.  She was adamant in declaring that “spiders don’t have stingers,” and demanded a reason for her to have one.  All I could come up with was, “They aren’t twelve feet across either.” To which she again cleverly replied:
“Oh Yeah.”

Her snarky exterior slipped a bit, when the hero of the saga showed up to rescue Frodo from Shelob’s webs and she warmly and happily cheered”
“SAM!”

We had a little talk about how Frodo was the protagonist, but Sam was the hero, which is an unusual story telling tool.  It took a while because she was busy pretending that she didn’t remember that she learned what “protagonist” meant in school last year, her eventual answer:
“Oh Yeah.”

She went right back into it in the next scene, when she asked why Sam was all dirty, and hitting me with one more, “Oh Yeah” after I blurted out:
“You just watched him roll around the ground fighting a giant spider!”

Considering she yelled, “ORCS!” shortly after asking about the dirt, indicating she remembered why Sting glowed from two movies previous, heaped a great deal more evidence on the, “Trying to drive me crazy” pile.

This one may be borderline between driving me crazy, and being overexposed to modern technology -
Any use of period long range communication methods, such as war horns or signal fires, would cause her to split the powerful anticipation and drama their use created by asking:
“Why don’t they just use cell phones?”

Not content to let our daughter have all the fun, my wife, who had been quietly sitting on the couch skimming the newspaper for most of the afternoon, waited for Aragorn’s haunting Elvish song to begin filling the city during his coronation, and then broke into a chorus of “Gangnam Style.”

I could tell from her expressions and involvement that my daughter enjoyed the films far more than she’ll ever admit. This is despite exclaiming, when the end credits rolled:

“That was like a billion hours just to go to a volcano and drop in a ring.”

I explained:
“That’s because it was an epic adventure.”

But she still wants to see The Hobbit: An Unexpected Journey in theaters.
See you all there.
Posted by Jeff McGinley at 2:00 PM

If she was concerned about the length of the epic, be sure to show her this 2 minute clip on 'How the Lord of the Rins' should have ended.
http://www.youtube.com/watch?v=u-14bpG1LGU

Those guys crack me up, thanx for the link. (Their Superman II ending was priceless.)

The only thing funnier is the infinite list of comments by Tolkien fans explaining why that wouldn't work. (In universe, as opposed to the obvious, "The story would suck.")