Warning:
This post contains jokes about gross body noises that will disgust adults with a sense of decorum.

Kids on the other hand will probably roll about on the floor laughing until they join in the noisemaking festivities, either by reflex, or on purpose.

The George Awards these next two weeks, are more benign that previous entries, but slightly more pungent. 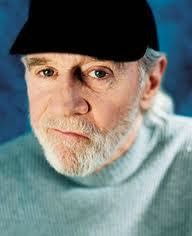 Fart jokes!  They’re fun for all ages. They’re also the reason my brain stared down the path of these posts after my daughter and I started to figure out our favorite movie scenes featuring them.

Yes, sir, we have quality family time at the McGinley home, and I work hard to pass along my comedic knowledge to the next generation…

Or to pass something anyway.

Sit back, relax and hold your nose as we explore the big screen world of the bi-labial fricative.

Before getting to the actual top ten list, there will be three bonus George Awards for unreal events in honor of Mr. Carlin’s famous, “artificial faht unda the ahm.”

The first Fake Fart George is a very controversial choice.  I wasn’t too happy seeing the introduction of this gag in the trailers for 2011’s Disney’s the Muppets.  Frank Oz himself went on record that “fart shoes” were out of character for Fozzie (now played by Eric Jacombson)  and didn’t belong in a Muppet film.  However, the obvious introduction of them that got all the play in the ads was not what earned them a place on the list.  Rather, it was the scene after the Muppets failed to save the theater when they were walking up the aisle, the picture of abject depression and failure.  Not only were the fart shoes a thousand times funnier in this inappropriate setting, but when Kermit said, “Not now,” and Fozzie apologized, they stopped without being touched. Comedy gold. 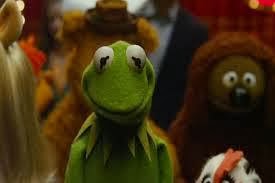 The second and far more impressive Artifical Fart George is  oddly also going to a Henson product. This one is for the Bog of Eternal Stench in Labyrinth (1986).  The George is awarded to celebrate the sheer variety of sounds made throughout the shots. The worth and mirth of the scene specifically came from how the length, pitch and timber of each blast varied as each character crossed the rocks, like a large swampy whoopee cushion collection.  All of the character’s over the top reactions added to it, specifically Sir Didymus, “The Air is Sweet and Fragrant!” and Ludo:

The grand prize George in this odd little stinker of a category, goes to 2010’s Despicable Me.  Doctor Nefario’s (Russell Brand) confusion was funny enough, however the quality humor came from Gru (Steve Carell) never stating the actual word and explaining, thereby ruining,  the joke.

Gru: “No, no, no. I said DART gun.”
Dr. Nefario: “Oh yes. Cause I was wondering... under what circumstances would we use this?”

The First Place Artificial Fart George was guaranteed by Doctor Nefario answering his own question in the 2013 sequel.  The twenty-one fart gun salute was good enough, both for, “I heard twenty two,” 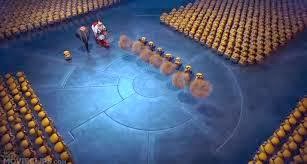 And the more hidden realization that the salute means Gru ended up mass producing the things anyway. (They are available in toy stores now.)

The clincher, though, was the good evil Doctor himself using it to end the battle with mutated El Macho, after the awesome pre-attack line: 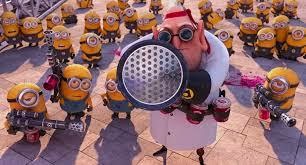 Before the next week’s highly prestigious list of the Great Movie Fart Jokes, there’s one honorable mention.  It is definitely George Award worthy, featuring an acclaimed actor with a career almost fifty years long appearing in an Oscar winning film.

Sadly, the drinking game scene between Orlando Bloom’s Legolas, and John Rhys-Davies’s Gimli from 2003’s Lord of the Rings: Return of the King ended up on the cutting room floor and was only seen in the extended home release.

“It's the Dwarves that go swimmin' with little, hairy women.”
Before belching, passing gas,
and shortly thereafter, passing out.

Come back in a week for the finger pulling finalists.
Posted by Jeff McGinley at 2:00 PM