Rocky Through a Kid’s Eyes: The Capstones

There was an extensive break between watching parts IV and V of this tale.

This was partially because of my daughter being scared of Drago and not wanting to see him in the inevitable recap. Finding a video of Dolph Lundgren performing an Elvis hit:

The main reason for the delay was that we were planning a Disney World trip.  I could never find any justification for watching the Decline and Fall of Tommy Gunn instead of any of a large number of Classics of Western Animation.

Luckily, I knew how good Rocky Balboa was, which aided my pushing to view the first attempt to end the series. 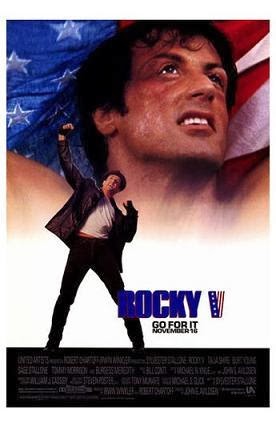 I think the problems with Rocky V stemmed from two key areas.

The first goes back to my example of how the series represents the same steps each film passes through:

However, in the movies themselves, the aftermath basically consisted of,
“Yo Adrian, we did it!”
And
“I love you.”

Stretching that to a whole movie was a bit much.

The second issue came from the fact that the rest of the series used boxing as a metaphor for life’s problems.  A large portion of Rocky V had to do not only with life’s problems, but Boxing’s problems: how promoters were changing things, how the money was more important than talent, etc.

Add in that Rocky himself wasn’t the fighter, and the story lost crucial elements that made the other films engaging.

"Because it needs six trumpets."

My wife and daughter paid some attention to the movie, but were more upset with the events than anything else.

Rocky spent most of the film being a bad father.  He redeemed himself at the end, but it would have been a better character move for him to realize what he’d done before Tommy left.

Once again, Paulie, for all his faults, showed why the family put up with him.  Paulie spent the story being more supportive and taking better care of Rocky Jr. than his dad did.  He also immediately and continually noted that Tommy was basically an irredeemable nut job in the ring and not worth the effort.  Rocky’s undisciplined nature was controlled and harnessed by Mickey’s and then Apollo’s and Duke’s training.  Even when Gunn was successful, he was still wild in the ring; Rocky’s training never made a difference in that area.   Not counting financial people, Paulie was a pretty good judge of character.

That’s another large issue with this film.  Tommy Gunn was the one in the ring, facing the challenges and driving the plot.  Since he made primarily wrong choices, and didn’t positively grow as a person, the film was left with an unlikeable and unchanging lead character.  Sure Rocky beat him up, but, again, it was Paulie who spelled out why he was such a yutz (or garbage as he put it) and made another astute observation to Rocky:

"You should've left him on streets where you found him."

The fact that Paulie shrugged off Gunn’s punch  just may have proved he was a paper champion before Balboa demonstrated skills learned not only as heavyweight champion of the world, but also in the employ of Mr. Gazzo and wiped the alley with him.

There were several good character moments in the film. With the cast returning, it would be impossible not to have them.

Rocky was still an open, honest, good hearted man, who happened to pummel people unconscious for a living.

Adrian was still not only the smartest member of the family, but also the strongest.

And despite dying two movies before hand, due to the magic of Hollywood flashbacks to moments that never happened, Burgess Meredith's character still had the most awesome line:

"Get  up you sonovabitch, 'cause Mickey loves you."


The family interplay provided several bright spots, especially when Rocky took his head out of his heiney and noticed his son.  Rocky Jr.’s story was one of the highlights of the outing, pointing out the value of combining brains, brawn and compassion in the proper amounts. Sadly, him being played by Sage Stallone makes many of the heartwarming scenes equally heartbreaking.


There also was one shining moment that defined the core character.

When Rocky was living vicariously through Tommy Gunn’s title fight.

He was in his home, having already been dumped by his former student.

During his intense and emotional workout on the heavy bag, the look on his son’s face sold the scene. It went from fear and pity to understanding.

I think even though they faded in and out on this movie, my wife and daughter picked it up too.

(They did, however, fade back in strong to Cheer George Washington Duke getting decked.
Heck my wife said Rocky’s, “Sue me for what?” line before he did.)

Rocky fought because he was a fighter.

This theme could have served to make this a good enough ending point.  However, they came up with a much better capstone to showcase its sixteen years later. 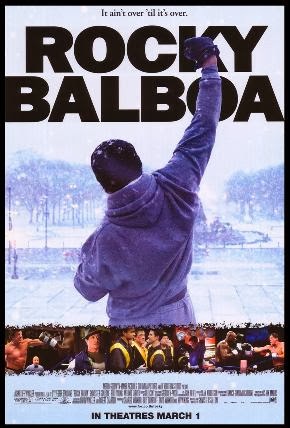 The film started off with references to the original, opening up with a boxing match (on TV) and Rocky feeding his turtles.  Afterwards, he fed several other animals. I took that to be him filling in for Adrian, who did that at the pet shop.  This was one of many well executed and subtle points in a movie far better than it had any right to be.

It was high enough quality to give me hope for Creed.  Here's hoping they can find Slyvia Meals to come back as Mary Ann Creed. Though in the background, her few appearances were well performed as the frustrated, unheeded voice of reason to Apollo.  She worked as a good contrast to Adrian then, and would add a dramatic dynamic to her grandson's journey.

My daughter (and wife) started off immediately asking how he was going to fight at all, since he was too old.  The aforementioned betterthanithadanyrighttobe-ness won them over quickly and they became as involved with the final portion of the story as they were with the earlier movies.

In a sense it was almost the same tale Rocky V was. Mason Dixon was shown in a similar situation as Tommy Gunn:
A champion who lacked respect,
Was unfavorably compared to Rocky,
And controlled by promoters and taken to the “good life” away from a real trainer.

The important differences were:
A) Dixon wasn’t a psychopath.
B) Dixon’s clash with Rocky took place in a ring, with all the pomp and ceremony around it.
C) Dixon was shown learning from his experiences along the way.

This film had everything the final fight of Rocky’s career should have had.  Its myriad call backs to the original were a reminder of where it all started, but those were also used to provide evidence of how time inevitably marches on.

In other words: the story went back to using boxing as a metaphor for life’s problems, both with Rocky and his son. In this case it there was the added appeal to those of us who’ve been around since the series started of it being a telling and poignant representation of aging.  I’d call it the best one of those since Bubba Ho Tep.

Neighborhoods crumble (the ice rink and the pet shop)
Kids grow up (Little Marie)
Enemies reconcile (Spider Rico)
And loved ones pass (“You know, I couldn't have done nothing without you. Yo Adrian, we did it... we did it.”)

But still, life goes on.

Paulie’s awesomeness continued in this depiction of autumn years.  He was constantly urging Rocky to move forward and not dwell in the past.  For as big a dope as he was, Paulie displayed extreme wisdom in these films.

My wife and daughter were visibly upset by Paulie getting fired.  The characters the stories revolve around may appear to be simplistic on the surface, but there’s enough depth to create emotional bonds with the viewers.  This is even true of the viewers (some related to me) who don’t like boxing, and thought Paulie was “a meanie” when they first met him.

He did show some growth. While he secured endorsements, just like the first movie, this time they were on his clothes, not Rocky’s.

We were definitely back to full involvement.  My wife teared up at the father and son stuff, and my daughter was dancing around the room and shadow boxing to “Gonna Fly Now.”

The strength of the Rocky Movies, and the hold they can create on an audience was clearly shown in Rocky’s final fight.  This time, I’m not talking about them both crying out, “Oh God!” when Balboa went down in the tenth.

Although the fact that he got up, not because of remembering what someone else said, but remembering what he had said to his own son, added another level of “perfect capstone” to this film.  Especially since it was a quote that summed up the message from all six parts of the saga:

I saw the true power of Rocky Balboa’s World at the beginning of that match-up by watching my daughter.

I remind the reader, this is the same child who greeted less than a second of the opening of Rocky with the observation, “There’s too much boxing in this movie.”

The start of the final fight of the “Italian Stallion” was not captured using the usual cinematic tricks to make it more dramatic and appealing for movie goers.  The entire lead up and first several rounds were filmed as if it was a live boxing event on HBO.

My daughter, the same person who uttered the “too much boxing” quote above, was kneeling with her elbows on the coffee table, leaning forward in anticipation the entire time.  She didn’t flinch, or turn away from the screen until Rocky had triumphantly left the arena, the actual victor of the bout unimportant because, once again: 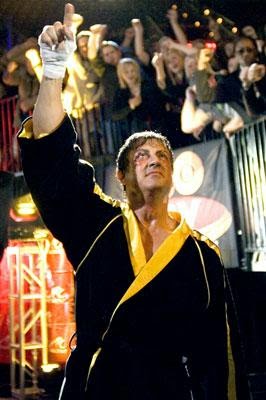 Excellent post. I loved your discussion of the role of music in these movies!! Also, After seeing Rocky Balboa I was insanely curious as to whether Grown up Little Marie was played by the original Marie, and I was sad to find out she was not.

Thanx! The music is really key to the appeal of these films I think. It certainly makes me go faster when I watch them from the treadmill.

We didn't get original "Little Marie" but we did get "Spider Rico," that has to count for something.