No Need to "Get Mad Baby" - Trust In Me: It Has all the Bear Necessities!

In order to dispel notions that:

A) I have given up going to the theater for anything except Star Wars.
And
B) I am impossible to please when there is a new take on a beloved character from my childhood.

I need to state that there’s a new Jungle Book film out by Disney and it is ASTONISHING!

For this one, I am an incredibly tough audience.  I am a HUGE Jungle Book fan.  And by that I mean the 1967 Disney animated version, not that I am a fan of Kipling.
In fact, I’m not sure I have ever Kippled.

B’dum-tchhh, thank you!
Tip the veal! Try your waiters! 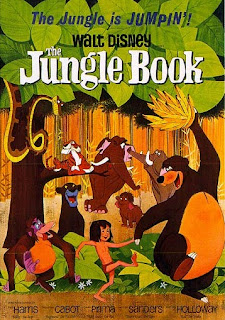 Anyone needing an enormous incoherent rant in their lives, ask me about the 2002 direct to DVD Jungle Book 2.   Turning “the girl” (originally voiced by Darlene Carr, and nameless, because she wasn't a character, but the representation of idea) into a giant pain in the wilderness wazoo that makes Mowgli question leaving the jungle at all is one of many key bits of complaining. 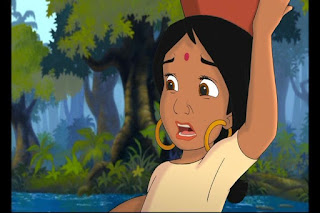 Her whole point at the end of the original was that she was the personification of wonderfulness and the entire reason he gave up his freewheeling jungle life.  It was a perfect ending, which can be a trap if sequels or continuations are desired, because it leaves absolutely no reason to go further with the story.  There are several comic book characters I have a hard time reading anymore because a single writer’s run had a perfect ending.  (Animal Man, Spectre, Swamp Thing, Thor)
This is only the core of my continual complaining.  The whole lack of quality and story are mere footnotes to issues like that.

On more romantic days, Beauty and the Beast comes close to taking the top Disney spot in my excessively Disnified head.  But my inability to resist “get with the beat” always pulls me back to the film that introduced me to the slightly less romantic notion of: 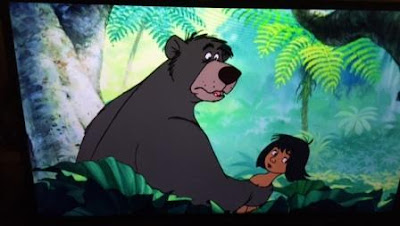 “Forget about those, they ain't nothing but trouble.”

I did enjoy Disney’s 1994 live action attempt at this tale with Jason Scott Lee.  I didn’t like it as a Jungle Book film though, since it made a mistake common to many adaptations.  If Mowgli is aged up a little, and the talking animals are removed to make it more “realistic” what you have there is Tarzan in India, not Jungle Book.  Considering how many of the old classic (and less old, yet very unclassic) versions of Tarzan used Indian animals anyway, Lee might as well have thrown in an, “Ungawa!” or two. 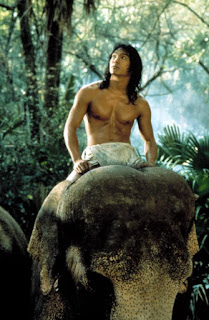 For the latest adaptation, John Favreau and company figured out how to maintain the fun and friendship that was the key appeal of the original, weaved it into a compelling and well constructed story and had the technical folks approach the realism in a different way.

This film’s effects are as ground breaking as Terminator 2 or Jurassic Park were in their day.  Following the overuse in films like the Star Wars Prequels, there’s been a push away from over reliance on CGI and towards a return to more practical effects to create scenes with weight and reality to them.  Jackson’s Middle Earth films and the Force Awakens used this to great effect, by having the CGI combine practical elements or matt them into digital backgrounds, as well as digitally remove safety harnesses and cushions to allow more impressive practical stunts.  The effects in Jungle Book are so impressive as to render themselves invisible, allowing this Disney movie to follow the lead of its Animated Classic ancestry and be an adventure driven by fantastic characters. 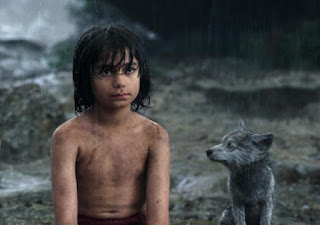 Neel Sethi’s exuberant yet heartfelt performance as Mowgli carries the core of the film, and highlights what I saw as the attraction of the original- life in the jungle for a little boy is challenging, requires a great deal of cleverness and energy, but above all is a mountain of fun.

With the exception of this excitable and engaging young lad, the rest of the movie wasn’t there at the time of filming.  I’m sure the Henson puppets he was reacting to were phenomenal, as they always are, but all of his natural looking surroundings, and the life like animals inhabiting them were all created in a computer.  When CGI was first taking off there were rumblings of, “Soon we won’t need actors.” I think the performance imbued onto computer generated characters of all types by the thespians in question has cemented that idea as a falsehood. 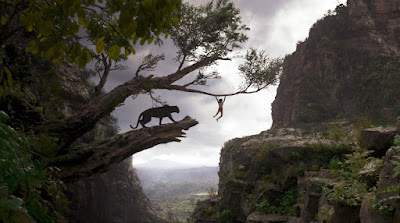 However, I believe this new Jungle Book, by being full of “real” scenes that were shot for shot copies of the beautiful multi-plane camera images from the 1967 film, may have established that there is no longer any reason, other than aesthetics, for an animated film and a live action film to look different.

They used referencing not only for the locations but for the characters, instead of motion capture, which somehow made everything look more realistic. The animals manage, all at once, to appear:

It will be interesting to see what the Andy Serkis helmed Warner Brother’s version done with motion capture of Serkis, Benedict Cumberbatch, Cate Blanchett and Christian Bale due out in 2018 looks like.  Seems like we have a Disney/Marvel versus Middle Earth jungle war a’ brewing.

Baloo looks completely and totally like a real bear…who somehow happens to resemble Bill Murray.  The same is true for all the other characters. (Resembling their actors that is, they don't all look like Bill Murray, that would be weird.) 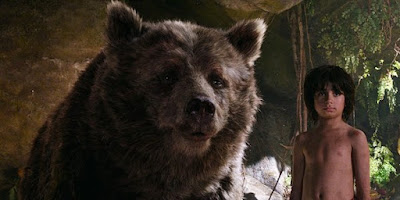 They did not repeat the mistake of Jungle Book 2 with Baloo.  I like John Goodman a great deal, and thought he was fantastic in Blues Brothers 2000, But he wasn't trying to immitate Belushi.  Having him, or anyone else for that matter, try to be the unique Phil Harris was a colossal failure waiting to happen.  Some things cannot be recreated. 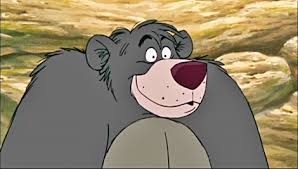 This Baloo, is as much of a fun loving, lazy, but good hearted and there for his friends jungle bum as Harris’s creation was, but his mannerisms are pure Murray.  The reality that he is, in fact, a giant bear is also a new tactic and used to great effect.

Similarly, King Louis behaves like a mafia don version of Christopher Walken. He looks like him too, if Walken was a giant orangutan that could sing a fun song…

That sentence makes much more sense if you see the film.

Speaking of fun songs, music that was an undeniable part of the animated film are worked into this movie, some as background instrumentals along with recognizable cues from the score, and others as straight numbers.  The numbers shouldn’t work since this isn’t a musical, yet they do.  In some cases they provide the perfect balance, injecting the levity of the cartoon into scenes that have restored the menace from the book. 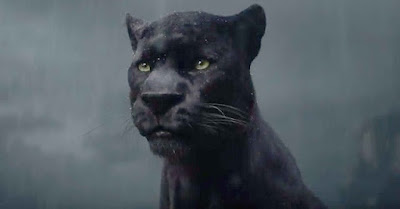 Ben Kingsely brings the proper class and intelligence to Bagheera, providing the voice of reason and narration to the proceedings.  He also carries the strength and grace of a lethal jungle cat, becoming one of Mowgli’s staunchest protectors. 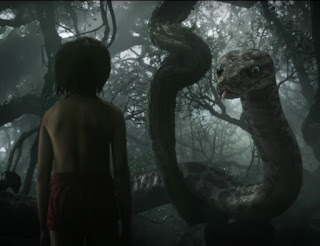 I thought Scarlet Johannson was an odd choice as a giant python. That is until hearing her voice surrounding me.  It has the perfect hypnotic qualities.  It also has the perfect melodic qualities for “Trust In Me” which the vocal version is sadly only heard in the end credits.

So don’t leave when the credits start.  I don’t even understand people who are too impatient to wait for an end credit scene, but this film has entertaining music videos with references to the new and old film, and people stampeded out in front of it.  When its me complaining about people having a lack of patience, there is a serious issue afoot. 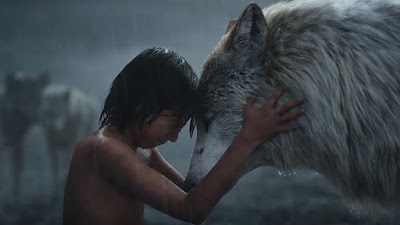 Lupita Nyong’o and Giancarlo Esposito embody both the strengths, concerns and compassions of parenthood as the wolves who adopt Mowgli, Rakasha and Akela.  The film highlighted the idea of him viewing those who raised him as his true parents, despite the acceptance of differences from them.

Yes, there’s a strong Disney “be yourself and follow your dreams and abilities to success” message, as there should be.

In the tradition of director cameos, Baloo’s “peanut gallery” is Favreau as a pygmy hog, and Sam Raimi as a giant squirrel.

In the tradition of “weird final roles” Garry Shandling bids us all farewell in a hilarious turn as their buddy, Ikki the porcupine.

Of course no Disney film can thrive without a villain, and Idris Elba’s Shere Kahn provides that thrivingness.

He is as majestic, impressive and powerful as tigers are.  This could be a problem since that’s a recipe for making the villain the most liked, or at least admired, character. 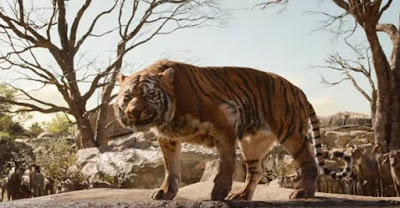 Elba, however, imbues the tiger with deep cruelty and evil.  The story structure helps with that as well, laying the Laws of the Jungle out clearly, repeatedly, and in some cases at levels of awesome rivaling a well written Green Lantern Oath comic book scene. (Note to non comic book geeks -that would be “Extremely Wicked Awesome.”) There is even an explanation using those laws of why there is no carnivore prejudice, and other predators, such as Bagheera, are not trying to devour any of the lovable (herbivorous) side characters for the duration of the plot.

I think the key evidence for quality of the new computer generated individuals is the elephants.  They don’t talk, and instead are presented as silent, dominant and revered shapers of the land. 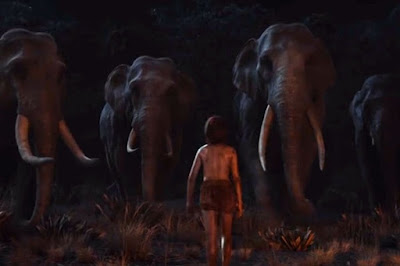 And there is not a shred of a visual cue that there were no actual elephants filmed in this picture.

The 3D worked well too, not a (Bear) Necessity but well worth the surcharge.

In conclusion (wait for it)

It was awesome, go see it.

They were even smart enough to leave themselves room to continue by giving it an emotionally satisfying and fulfilling ending that provided closure to all the important threads, and left the characters in a place that completed their arcs.


Yet the story has room to continue because the ending was not... 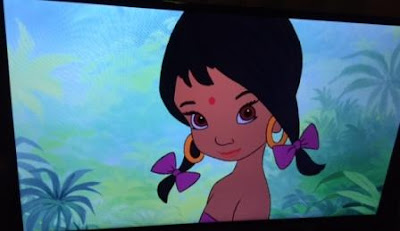 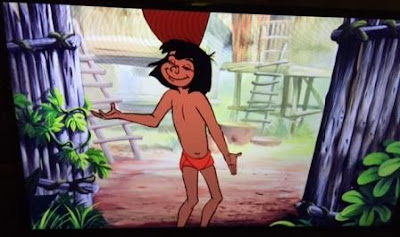 I've been trying to talk a 9 year old to see this movie. Too scary for that age group?

I've long considered you a underrated master of the written word. Your latest writing confirms my opinion. I will continue reading your future publications with much "THRIVINGNESS!"
Cuz Michael

Chris: No way. Heck, the thing is rated PG, not even PG-13. Some suspense, action and threats to the hero, but nothing horrendous. Besides, without those things, there's no story.

Micheal: Many thanx, that means a lot, cuz. I shall continue to endeavor to create words worthy of your attentioniveness.