Back to the Cabin 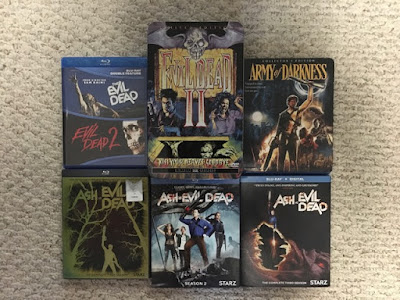 I’ve finally upgraded my copy of the original Evil Dead to Blu-ray. That seemed like enough of an excuse to watch the entire franchise again...

Which in turn is enough of an excuse to talk about the adventures of Ash and friends again.
It's not like I really need an excuse for either, but I've been stuck at home too ya know.

I probably haven’t seen the first film in well over a decade.  It really is an excellent little scare fest, continually creepy and interesting. It’s also impressively gross for a low budget outing.  The early days of both Sam Raimi and the KNB Effects guys is fantastic foreshadowing of where they ended up. 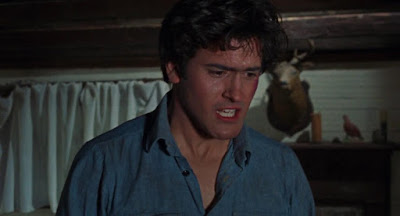 It’s amazing how little resemblance “Ashley” bears to the bombastic deadite slayer everyone thinks they know.  What is in evidence from the beginning is Sam’s utter enjoyment of battering his high school classmate Bruce Campbell on film.

Ashley, per their design, is the “Last Girl” of this film.  Scotty is the point “tough guy” in the first outing, and Ash tends to panic, freeze up, and run to hide the whole time.  There's more in common between him and Shaggy than any of the video game heroes that stole his later catch phrases.  He stops the evil (briefly) toward the end as a last ditch and frantic defense.

Watching the first two films in a row really ratchets up the impact of the scene where Annie calls Ash, “You coward!” when he runs out after Ed is possessed in Part 2.  All of his previous actions lead the viewer to believe he’s left her alone.  His grim return with an axe plays out impressively in the “long form” of the story.

Evil Dead 2 is still the Most Awesome Film in the history of cinema. With the myriad times I’ve seen it, I always notice something new.  Ed isn’t just Annie’s boyfriend, he’s the professor’s assistant.  I never noticed that before…possibly because he doesn’t do anything to suggest he has any academic training at all, but never mind that now.

Bruce doesn’t really start to become the Ash that we all know and love until after he’s possessed and beats it on his own. This is unprecedented in the franchise, and proves he is the chosen one.  There are only three others who live after possession.  Sheila in Army of Darkness is saved by Ash vanquishing the evil. Both of the other Ghostbeaters get de-possessed in the show by El Brujo’s influence (alive for Kelly, ghostly for Pablo.)

It still kept my attention all the way through and remains my favorite film.

Army of Darkness was a different upgrade. The Shout Factory collector’s edition has a whopping four versions on it:
Theatrical Cut- the shortest with the studio requested S-mart ending.
Directors Cut- Extra footage, alternate takes (some better some worse) and the Sam and Bruce preferred “stranded in the post apocalypse future” ending.
TV Cut- Gore and boobs removed, some director’s cut footage added.
And
The international Cut- that De Laurentis edited, some changes and the S-mart ending.

The last was the only version I hadn’t seen yet. I knew it was longer than the theatrical cut so I tried it on this run through. It is clear and documented proof that the studio had no idea what the our beloved gang was trying to do.

Several scenes had key bits of goofiness edited out, making it a more serious action film.

How sad.
Oh well, I guess I’ll have to watch the theatrical cut again.

I binged though all three seasons of Ash Vs. Evil Dead just as quickly as I did the first three times ([1]initial, [2]with commentary and [3]with my daughter, that's my girl!) It keeps up the spirit of all three films, flipping through genres throughout every episode.

Pablo and Kelly grow and develop from beginning to end and could certainly carry the franchise going forward.  Brandy was a welcome addition in the third season, and I have no problem with her as a member of the team. I do feel that her arrival connects to the only problem I have with the series, outside of the fact that it had to end.  Kelly really completed her main character arc, becoming a dangerous and competent deadite slayer by the end of season two. Pablo completes his arc, and his process of getting more and more ripped, by becoming El Brujo Especial in season three.

I feel like the focus on Brandy’s arc of becoming a "Williams" in that last season took away from Kelly.  Ruby was an awesome  villain and occasional ally, but never taken out by one of our heroes (1st season- bargained with, 2nd season- killed by her past self, 3rd season- past self killed by the Dark Ones…What a fun show!) They could have easily let Kelly take out Ruby, even if it was mutual in their fight, leaving the rest of the possession/ deadlands story intact.  It would have given Kelly a better capstone.

It’s not like this deficiency will keep me from watching them all again.

Probably in the near future, for it is...

Many kinds of Groovy