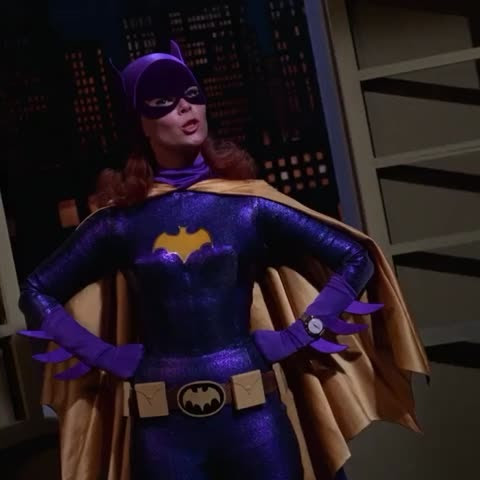 On the “Batman” and “Robin” labels on the bottoms of the poles:
Rosa- “They only show the names when they’re going to be using them to go up.”

On Barbara’s introduction:
“She has black hair???”

On “they” being used in a room with only one person:
Anabelle- “They?”
Rosa- “Oh, she’s there too…that tiny little light really fills the whole room.”

On Burgess Meredith’s voice:
“Penguin is one of the loudest bat-villains, and that’s saying something.”

On Barbara’s décor:
“HEY! She has one of the Hippos from the MET.”

On one of the set ups:
“They just have a life size cut out of the Commish…
because everyone in Gotham does.”

On Batgirl’s disguise:
“She wears a wig! That’s Smart.
Smarter than Batman and Robin both.”

On Batgirl disappearing on Batman and Robin:
Anabelle- “She’s gone.”
Rosa- “See, that’s how it feels.”

On Alfred seeing Barbara’s costume:
“He does know. That’s awkward.
So Alfred has to cover for her and them, now.
Meanwhile Ernesto is kicking all kinds of butt”

On Dick’s birthday present being a ’68 red Barracuda convertible:
“Duuuuuuuuuuuuuuuude!”

On the return of Frank Gorshin teased at the end:
“The real Riddler!
Yeeeeeees!!!!!!” 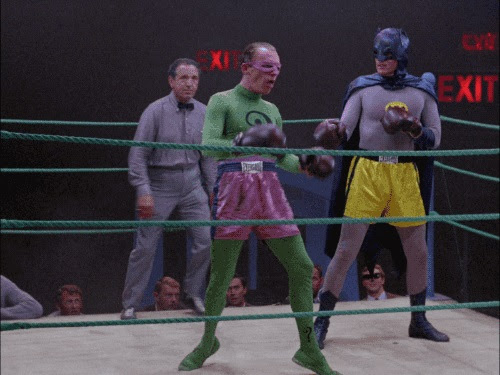 “Ring Around The Riddler”

On the return of the real Riddler:
*Mass cheering*
*The episode continues*
“This…this is not as good as he used to be. I blame the darker green suit.
We should just watch season one again.”

On the loss of the cliff hangers:
“This is too fast paced. I miss the two parters.”

On Batgirl talking to the Commissioner:
“Wait…that’s his daughter!
If I put on a mask and wig and called you Jeff would you not recognize me?”

On the introduction of Mushy Nebuchadnezzar, southwest Asia’s finest boxer:
“Oh, I wonder who that could be wearing the mask the Riddler always does?”

On me explaining the fight scenes will be odd since the women weren’t allowed to punch anyone back then:
Rosa- “Really???”

On the Commissioner saying he’s lost without Chief O’Hara?
“Huh? Why? He just stands around and says, “begorrah!’”


On the quick changes into the hero costumes in the locker rooms:
“No…
Way…”

On the boxers in the episode:
Me- “How many times does James Brolin show up in these?
And that’s Jerry Quarry, he’s a real boxer!” 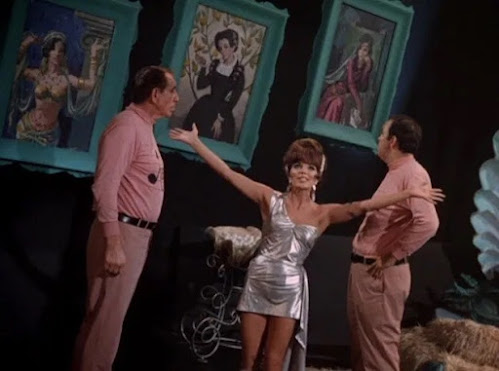 “The Wail Of The Siren”

On Barbara’s place:
“Her apartment is cool.”

On the Siren’s listing of evil women of history
after Anabelle has read some Shakespeare:
“Lady Macbeth is not evil! How dare you!”

On Barbara’s pet:
“Oh boy. She’s talking to the bird again.”
*Barbara cites her biggest conclusion*
“The bird can understand you?”

On the introduction of Batgirl’s full length theme:
“I’m not gonna mention the song.”
*it continues for a very long time*
“Yes I am.”

On Batgirl’s hidden room:
“Why does she have a button to spin wall when she has to walk through a door in it anyway.”

On Chief O’Hara realizing they’ll have to figure out the solution themselves:
“Oh no, we’re doomed.”

On the Commissioner recognizing Alfred in the Batcave as the voice on the bat-phone:
Anabelle- *Punching me repeatedly in the arm*
“The Commish knows!!!!”
Rosa- “OOOH!”

On the Wayne Foundation:
“Why is that nicer than his house?”

On them being thrown out now that Siren owns the building:
“Dick is pissed.”

On the women not being allowed to punch:
“Cool? A kick fight!
Whoah! Batgirl just kicked him in the nuts!”

On the Commissioner knowing before we learn the Batsleep messed with his memory:
Rosa- “They’re going to wipe his memory with the hair dryer.”

On the Bat-Computer providing an alert that Penguin is returning with accomplice Batman identifies as Lola:
“How do you know that?”