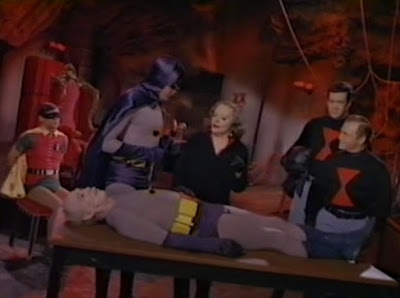 On the commissioner referring to himself by name:
“Robin is thinking. ‘I don’t know any Gordon, Commish.'”

On Black Widow telling them to "Sit on their tuffets:"
“Oh… ‘cause she’s. A spider. I like that one.”

On Batman being sprayed by Window’s paralyzing spider venom:
“How did Robin not get hit, he’s right next to him.
Wait, Batman is moving. It was only Lysol.”

On Black Widow’s gag about the rocking chair manikins being “off their rockers:”
“Ha ha ha. Move over Joker.”

On the robot/ manikin woman:
Me- “Hey, that’s the grandmother from Last Starfighter.
*Googles Meg Wylie*
Holy crap! And the Lead Talosian!”

On Batman’s amazing deductive work leading to him saying,
“Where does a spider hide? Under the house!”:
“That’s not even remotely true.”

On the enormous plastic spiders on our heroes:
“Aren’t black widows tiny?”

On Robin’s less than quiet whispering style:
Anabelle- “Robin, that just makes it easier to hear you.”
Batman adds- “Perhaps I can pull off a bluff:”
Anabelle- “Did you hear that?  Yes, yes you did.”

On her favorite henchman:
“Is it just me or has Daddy Long Legs been standing there for all of this.
Maybe he’s above it all.”

On Black Widow’s perfect disguise that makes her look like Robin
And makes Burt Ward act like Tallulah Bankhead:
“I hate this so much.”

On the fickle police of Gotham:
“Black Widow robs a zillion banks no one is looking for her.
Batman supposedly robs one bank, they know criminals have dressed up as him before,
like yesterday.
Him they want dead.’

On Robin then breaking the mind control:
“Robin did something useful.”
*Massive Applause*

On the Dynamic Duo using Black Widow’s mind control machine to decriminalize her and her gang:
“So. You’re giving them brain damage.” 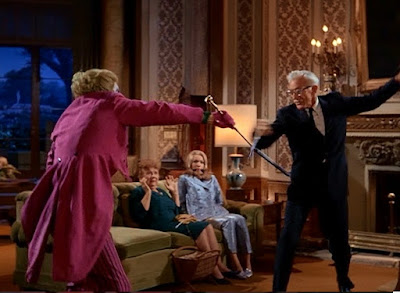 On the art museum attack scene:
Anabelle- “He’s messing up art. Now I have a beef with the Joker.”
Me- “Does this scene look familiar? Remember the Tim Burton movies?”
Anabelle- “Oh my gosh. I blocked those out.”

On the reveal of the bare Bat-Poles:
*pauses playback* “Hey! Where did their names go?
*Resumes- Alfred mentions repainting them*
“I guess I paused it too soon. That’s my favorite part.”

On the array of puns on artist’s names:
“Please stop.”

On Joker’s blank canvas:
“This is my painting of a polar bear in the snow.”

On the continued Modern/ Pop Art gags:
“This is an outrage. Making fun of art!
I bet Joker just wants to get into the museum to steal stuff.”

On the actress playing Baby Jane’s emotive abilities:
“She is very yikes.”

On Bruce’s continued insults of the Joker’s art and methods:
“Bruce is on fire today.”
*Joker says he dislikes Bruce as much as Batman*
“What are the odds?”

On Robin loosely tied down under a bunch of plastic knives:
Rosa and Anabelle- “Is he really stuck there?”

On Bruce not pressing charges against Joker to protect his identity:
Rosa -*sadly shakes head*

On anything Baby Jane says:
“Was that good guys? Hee hee. Did I do it right?”

On Joker saying he got a message from his muse:
Baby Jane- “What does it say?”
Rosa- “You’re so stupid.”
*Joker destroys her table*
Anabelle – “I do not like this one bit. She’s such an idiot.
Still, next time someone asks me to watch that (1989 Batman) movie
I’m showing them this episode."

On the Joker saying the police will never expect them to be in his Art Institute:
“Why wouldn’t they expect them to be there?
That’s the first place they’d expect him to be.
I mean the Gotham police suck but even they would go there.”
On the big Bat fight in the institute:
“Yes! Ooh it’s Ernesto. The absolute savage.”

On Joker entering Stately Wayne Manor:
*Joker monologues*
“Who are you talking to?”
*Alfred insults Joker, Misdirects him, and fences him with a poker*
“Roast Him Alfred! Absolute legend!”

On Joker finding the Bat-Poles:
*Screams!!!!*
“Oh my god!”
*We learn Alfred hasn’t put the signs up or replaced the costumes.*
*relieved sigh*
"Yay Alfred!”

On Alfred’s art exhibit:
“What have we learned today?
Bruce Wayne is a roast master and he learned it all from Alfred.” 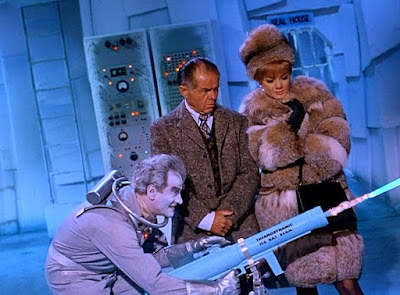 On seeing both Lt. Carolyn Palamas and Samuel T. Cogley in this episode:
Anabelle- “Heeeey! Two Trek people!”
Me- “Cogley is awesome here too.”

On the Commissioner supplying the ship’s passenger list:
“Wooo! The commissioner did something.
Is it from the 1800’s, the pages are yellow?”

On Lt. Palamas whining about her outfit:
“We get it. You don’t like the way the costume feels.
But we want more Batman.”

On the police calling Batman on the red phone and Bruce on the other:
“Oh dear God!”
*Batman converses with Bruce changing tone on two handsets*
“I was not expecting him to do that.
Dick is looking at him like, ‘Are you ok?’
It’s show biz blood boy back at it again.”

On Bruce and Batman agreeing to meet in Gordon’s office:
“That will go well.”

On Gordon's statement about Batman and Bruce,
Comissioner- "Two fine men. So dissimilar in many respects
and yet...yet so similar in others:"
Anabelle- "Gee, ya think!  He's such a fool."

On Cogley coming out of the “quick freeze” set to minus two hundred degrees unscathed because he’s from Iceland:
“How is he not dead? It’s not even that cold in Iceland.”

On stock crowd footage being used:
“Do you see anything related to what they were wearing back stage?”

On the quick change to Batman and Robin costumes at Police HQ:
“Did you see Robin hobbling in there? He definitely has a wedgie.”

On Batman having a small echoing seal pulsator:
Anabelle- “Why does he even own that?”
Me- “He’s Batman.”
Anabelle- “Fair enough.”

On Mr. Freeze saying “something may happen” when he injects dry ice into Cogley’s veins:
“He’s dead. That’s what may happen.”

On various counterfeiting schemes on this show:
“Why don’t they pay freeze with the fake money that was only one sided that everyone was okay with?”

On the reveal of the protective super thermalized Bat-Skivvy’s:
“They were wearing the special v-long thermal underwear again! Robin did have a wedgie!”

On Eli Wallach as the third Mr. Freeze:
“I don’t like that man. But he’s the best Mr. Freeze.
He’s entertaining but I couldn’t do it again.
The first one was good but wasn’t extra enough.
And I didn’t like second.”

On Mr. Freeze referring to his seal as "expendable:"
“How dare you!”

On Batman and Robin rushing to Stately Wayne Manor to get sleep after escaping the trap:
“They pulled twelve all-nighters in the past few episodes.
But now, ‘oh no it’s cold, we have to sleep.’”

In using cake frosting as part of the villain’s theme:
“Icing isn’t ice. That’s not a thing.”

On Gordon mulling over the location of the (sleeping) hero with, “Batman, wherefore art thou?”:
“That’s me watching this show- Batman, why?”

On Gordon sending a note to his daughter:
“That’s the second Barbara reference. It’s like they know she’s coming.”

On how they found Freeze’s hide out:
“Everything in Gotham is labeled.”

On Batman pulling out a fish for the sea lion with the line,
“A true crime fighter always carries everything he needs in his utility belt, Robin.”:
*blank stare*
“He has a fish tank…
in his utility belt.
That fish leads a sad life.”

On Aunt Harriet have a slot car playroom made without Bruce and Dick knowing it:
“Well, duh. You’re never home.”