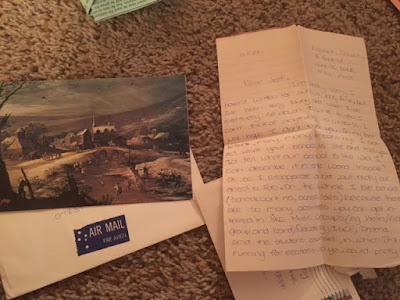 Some things aligned recently, probably far more due to the human brain's predisposition for pattern recognition than any kind of cosmic synchronicity.
First, I got to be the one taking a virtual trip (instead of writing one) by reading Dina's excellent travelogue about Australia.  This was highly informative, fun and entertaining. Not to mention it was nice that there were no requirements to skip sleep for long nights of note deciphering and editing.
Second, my wife decided that the inside of my closet was an eyesore from across the room and I needed to go through everything as she created a new shelf storage system.(thanx honey!)
We seem to have different eyesore thresholds. In her defense it had actually passed mine a while ago, but I've been preoccupied with being stressed out all the time.
These combined to remind me of something I'd completely forgotten about:
In my youth, I decided that I would inevitably move to Australia at some time in my life.
I'm not concretely sure of the reasoning, but I have an inkling based on some vague memories and my mindset at that age. I am reasonably confident that, contrary to most sane people, the reasoning involved that continent being home to a large number of hugenormeous sharks, crocodiles, snakes and spiders.
Along the lines of this thinking, somewhere around fifth or sixth grade we had the opportunity in school to sign up for international pen pals.  Yes, back in the cave man days talking to people outside the country required extra help.  We could register and manually write letters... on paper (GASP!) then air-mail them to our new friends.
I picked Australia for the above reasons, and a female pen pal, not because of precognition that I'd end up in a trans continental romance, but then, as now, I was unable to maintain a conversation about current sporting events.
Liz Doherty of Warilla New South Wales and I were given each others addresses and exchanged letters for a while. The whole concept that she was spending summer beach time around Christmas (where she got a blister on her foot about one inch long) blew my youthful mind.
The school systems were different making it hard to tell since we only talked in "grades" not "ages," but I think she was a little older than me.  We wrote letters about family,  school (her's was "insane"  but really "fab" ), extracurriculars (she was in all of them) vacation times, music (she played viola I played saxophone) and other random stuff.
We also talked about exchanging photos, and when I sent her mine...
I never received a letter from her again.
Several years after the fact, I realized what may have caused it unrelated to the image of me sent.
For reasons I am still entirely unclear of, I decided I should glue my wallet size school photo to a page of my letter.  This was unwise for several reasons:
1) I used Elmer's glue which runs everywhere on normal occasions.
2) I did the gluing directly before folding the letter and sealing the envelope.
3) Air mail went through more handling and transit than regular mail.
4) I am, and always have been, a disaster when using any adhesive, up to and including using medical grade substances for work where I inevitably glue a minimum of seven fingers together (not always all my own) by the mid point of any task.
Therefore, I'm almost positive the letter was an unopenable, gloppy mass when it reached her, assuming it didn't get stuck to something on the way to the Pacific and never made it to the land down under.
I mentioned this theory to my ever helpful daughter who replied:
"Keep telling yourself that, Dad."
Posted by Jeff McGinley at 2:00 PM

I feel bad that I never saw this...well, until now. I was reading all your trip reports. I finished those. Now I'm reading some of the stuff that I missed.

I did the sign-up-for-international-penpals thing too. It's funny that now we can talk to international people as easily as people in our own neighborhood.

Hey, I'm thrilled someone is reading that isn't a blood relative or former classmate. Timing is inconsequential.

IT took a while to explain the whole concept to my daughter about how and why pen pals worked.