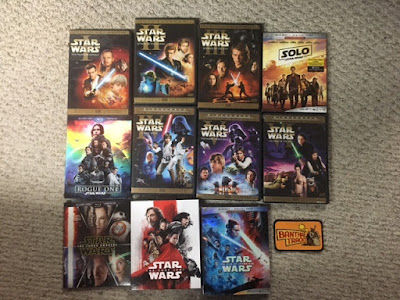 It was coming up on the time for my Semi Regular Need to rewatch all the Star Wars films anyway, then The Madalorian pushed me over the edge.  Especially now that the sequel trilogy is done, I was thinking about the optimal watching order...
As I often do.
For a while I was in the camp of using the prequels as flashbacks to avoid spoiling key moments from the original films.  The question of where to put them is hotly debated among us Star Wars geeks.  For a while I thought about starting with Episode I,  then putting II and III after Star Wars and Empire respectively.
That would add too many reveals.  I've seen it suggested that they all go after Empire once the secret of Luke's father is known, but you still lose the surprises of Leia's heritage and the Emperor's lightning power that way.
I finally decided the optimal place to avoid any spoilers is that the flashback happens when Vader is looking back and forth between his master and his son while Palpatine is zapping he potatoes out of Luke.
As for the two "Star Wars Stories" I mostly agree with others that Rogue One is good enough to lead into Star Wars without taking too much away from it.
I am also not unique in coming up with the idea that Solo works as an in universe tribute to Han made by people who didn't know the whole story and should be watched after Jedi.
However, following much internal and external thought and debate about this, I decided the best order to see the Star Wars movies the first time is...
The order they were made.
All the reveals remain intact, all the exposition is in the right order, and movies that take place before earlier made films feature nice call backs and references that aren't as strong watching them the other way around.
That's not how I watched them this time, though.  After the number of times I've seen, read about, argued over, defended, had dreams inside and revisited these films, I'm not concerned with spoilers anymore.
Therefore I watched them following in-universe chronological order, to allow me to put them back on the shelf in an organized fashion.
As always, there were some new insights and observations.  Care to join me for another geeky trip to a galaxy far far away?
Note- Unlike other times I've promise posts are going to be short, I'm insanely busy at the moment, so these will actually be short...
At least for the prequels...because they're not "mine."
For-the originals- I'll probably get overexcited again.
Can't be helped.
I was the original target audience.
Episode I
Episode II
Episode III
Solo
Rogue One
Star Wars
Empire
Jedi
Episode VII
Episode VIII
Episode IX
Posted by Jeff McGinley at 2:00 PM

They made movies out of the Star Wars cartoons?

Amazing, I know. Sadly they're nowhere near as good as the cartoons were, and are.