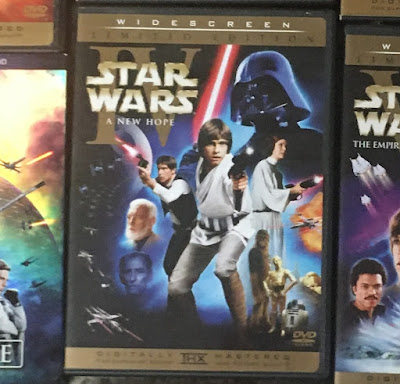 It's Star Wars, Not "Episode IV."  I just like consistent titles.
I've been talking about the original Star Wars film non stop for almost 43 years, meaning its nice that this post landed as close to the big blog ten year anniversary as it did.
Here's a couple of new or expanded points from the rewatch, illustrating why I've seen it a zillion times, and how the originals will always give me more to talk about.
But first a tip of the hat to John Williams.
How awesome is he?
After all the re-releases, special upgrades and sock puppets on your lawn editions of this film, no one dared to mess with his score, not even to put the "Imperial March" in the only Star Wars film that doesn't include it.
On to the points.
A) This is the best Star Wars film.
Period.
I will accept no debate.
People like to say it's Empire  because that film has darker themes and more character development. However, you couldn't have the time to expand on those things in Empire without the first one setting up the universe (which it does in a fully self contained story), and being successful enough to guarantee a third film.  The chemistry here is unparalleled. You have Hamill, Ford and Fisher together on screen for the longest time out of any of the movies, and that's what makes the whole series work.  The chemistry between other characters, whether it be interactions leading to 3PO's double takes, Han and Chewie's wordless communication, or Alec Guinness lending his considerable talents to add gravitas to the whole thing, is also amazing.
B)  The introductions and exposition are the best in this one, cementing the idea of watching the originals before the prequels. The first mentions of the force, lightsabers, and the Empire are all fantastic.  The Cantina is as well.   Non-human aliens are taken for granted, and all over the place, in the other films.  Everyone you meet in Star Wars, including the masked Jawas and Tuskens, are basically human.  Then the Cantina explodes on the screen opening up, "First steps into a larger world."
C) In their very first appearance Luke points out the cannon reason that was established years later in the Rebels cartoon why Stormtroopers are terrible marksmen:
"I can't see a thing in this helmet."
Now, to contradict myself, there were some cool elements that came out of watching Rogue One before the original this time.  The reveal of Vader in Star Wars was a life changing moment for me, and his introduction was telegraphed by seeing the fear of something unknown to the viewer transmitted through the Tantive IV crew before he broke in.  However, watching Rogue One leading up to this moment, Vader's insanely awesome attack at the end of that movie comes right before this "first" appearance.  Now the scene changes to a very known and understandable fear on the faces of the crew.
Aside- Vader is much less in control of himself and is much less than the Emperor's second in command in Star Wars than the later films.  It does work well as a transition from "Dark Anakin"  of the prequels, through Rogue One's Vader on the way to Empire and Jedi.
The other main spoiler from Rogue One is the Death Star.  The force is mentioned, but is alluded to as a myth in that film, to allow the full reveal by Obi-Wan.   The Death Star is shown existing and firing. Yet, in chronological order, we've only seen it take out cities, and its still the most devastating weapon up to that point in the franchise.  Then along comes Alderaan and the Death Star is revealed as the planet killer it is.  Overall, a cool escalation.
Click to Continue
Click here for intro and index
Posted by Jeff McGinley at 2:00 PM

"B) The introductions and exposition are the best in this one, cementing the idea of watching the originals before the prequels."

This is an excellent point

Thank you, much obliged. I kinda feel like those of us who were there, had those as introductions, and didn't grow up with Star Wars all around them are the only ones that really get that.
Thanx for playing.