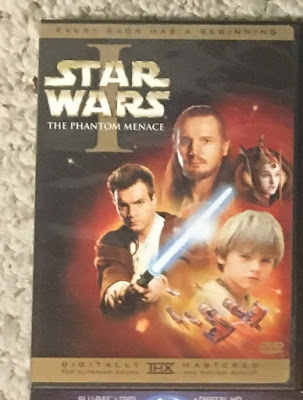 Yes, I saw all of The Mandalorian season 2.  It's going to take a couple of weeks to process that ending without it being a constant stream of "WOO HOO!!!!"
In the mean time...
I maintain my position that The Phantom Menace is the best of the prequels.
It's self contained with a happy ending, Darth Maul is wicked cool, and the film has got exciting action scenes including:
The completely loopy, fun and riveting pod race
and
One of the best lightsaber battles in the franchise.
That three way duel is more energetic than the classic series, doesn't descend as far into obvious CGI as the rest of the prequels, and maintains solid storytelling throughout.
The energy keeps running full speed most of the way through.  It also has bits, like the sporting event scenario of the pod race and the underwater environments that are unique to the franchise.
Overall it feels the most Star Warsish to me.
I have to take a break to specifically point out how much I love Star Wars line of sight based, lack of computing power for anything other than navigation and sentient droids technology.
Darth Maul lands his system spanning starship in the dessert.
Then he gets out and uses a pair of binoculars to find another starship on the surface.
Still I don't have much to say about it.  I don't think they're any less dense than the other films in the series, but I clearly wasn't the target audience for the prequels.  The originals were "my" Star Wars, and the sequels acknowledged that and made some direct connections.
There's another, highly important, reason this felt the most like Star Wars of Episodes I through III.  Showing Anakin whooping it up when Pod Racing and flying a star fighter wasn't to show the lighter, eight year old beginnings of Darth Vader.  It was to put all of us, who were about that age when the original came out into those cockpits, and let us whoop it up along with him!
Yippee!
Click to Continue
Click here for intro and index
Posted by Jeff McGinley at 2:00 PM

Concur on the lightsaber battle. Also, the pacing vs meditating pause in the middle of it is a top ten all-time Star Wars moment. I think that finally uncrossed my arms that had remained stuck that way since the Jedi left a kid's mother as a slave for....reasons.

Mostly I remember being so disappointed. My sister just happened to be in town on business so we saw it together on opening day just like we had 16 years earlier with ROTJ, despite going to different schools that year. We walked out the theater, adults, and sort of went "Ok". As opposed to our kid reactions of wanting to explain it all to our parents and friends.

Did the same opening day thing with my sister. It still had enough "woo hoo" moments for me. Given Droids are clearly sentient, I was used to accepted slavery in the Star Wars universe.

That pause is an amazing moment. Really shows who the three characters are beautifully and wordlessly.

Thanx for joining in.

Interesting point about the Droids.
Are you sure you never saw https://memory-alpha.fandom.com/wiki/The_Measure_Of_A_Man_(episode) ?
(He posted after clicked the requisite "I am not a robot" prejudice filled box)

I did see that one. I made it to season 4 or 5, complaining about every one on TNG. So I also saw the multiple episodes after it where they forget everything they learned in "The Measure of a Man."

I talk more about the Droid slavery thing as I get through the other films...coming soon to a blog near you!

Thanx again for joining in.