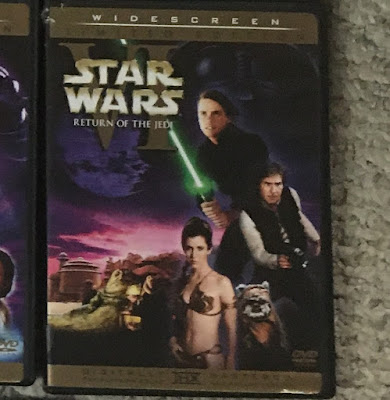 This is as good a point as any to point out the awesomely insane subtitles on the special edition 2006 Star Wars DVDs that were the last opportunity to get the unedited, original forms of the Classic Trilogy.  They spell out individual beeps, whistles, grunts, growls, words in alien languages, Chewie's Tarzan yell and Threepio's entire speech to the Ewoks to really add to the experience.
Return of the Jedi starts out with parallels to the original Star Wars from the get go, and carries them throughout the film, establishing a Star Wars precedent for generations.
The opening on Tatooine is the first time we see all of our heroes working together in action on their own since the Death Star escape. It's also the last time. They're together on the Tydirium with the troops, but get fragmented in the Endor climax of Jedi.  The chemistry is still there, but everyone is a little cuter, and nicer.  It happens to all franchises. Even the the Muppets were far more messy and weird at the start.
The "Special Edition" of Jabba's band singing "Jedi Rocks" was a hoot, but it blows the tone of the story at that junction. The original song, "Lapti Nek" is fun, but still kind of creepy, which fits in the terrifying and uncomfortable scene it leads in to.
It's really clever how they shot "Boushh" only standing next to Chewbacca or people on Jabba's platform making it less obvious how tiny she was, preventing an early reveal that it is Carrie Fisher under there until she rescues Han.
Another bit of evidence for Rise of Skywalker Sith possession idea helping-  After watching the prequel trilogy, Ghost Obi Wan's "certain point of view" explanation about Anakin makes almost no sense. With the concept of Sith possession, it makes a little.  It also helps explain Vader's switch back to the light, as the Emperor has chosen a new apprentice to target at that point.
Its hard to underestimate how cool Admiral Ackbar was back in 1983. It wasn't like current Star Wars, with aliens all over the place. They were concentrated in a few locations and mostly as background characters.  For two and a half movies the heroes were all human, and then, all of a sudden on the bridge of the Rebel flagship, "Hey! A fish!"
More great "line of sight" technology- the entire Imperial Fleet hides behind a planet from the incoming Rebel Fleet, which clearly have sensors since they're scanning for the shield.
How cool is Han?  Everyone else on the Endor strike team is wearing a full cover camouflage poncho and helmet. Leia even puts hers back on after being done with the human skin dress the man eating Ewoks provided her with.  Han has his usual outfit under an open trench coat that he dumps as soon as possible. "Hey, it's me!" indeed.
As for the bad rap of the Ewoks, they are tough and dangerous little buggers from when we first meet them. They aren't that much goofier than the Jawas from the first film. I think the ire came from those of us in the original target audience who were excited seven year olds for Star Wars, that had aged to surly, less humored thirteen year olds for Jedi.  That explains why the Ewoks got two TV movies and a cartoon series for the first "next" group of Star Wars kids.  Plus there's a metric crapload of them and those traps have clearly been set up for a long time. They've probably been picking off and eating Imperial troops here and there for years.
Do you know how many times I had to see this movie (counting endless HBO screenings) before I figured out Luke is coming out of that AT-AT when he meets Vader on Endor? That's just embarrassing.  I think I'll blame watching it primarily in the "pan and scan" aspect ratio on cable.
Wow! The original effects of that crazy giant space battle around the second Death Star still hold up great thirty-seven years later.
I think a big problem with the sequel trilogy was that Jedi  was such a fantastic conclusion.  The villain escalation gets bigger each film of the original trilogy, yet while everyone else wins combat battles, Luke wins via compassion. (A Jedi uses the force for knowledge and defense, never for attack.)  The very final scene comes back to the main heroes working together.  Look in the background when Luke is acknowledging the force ghosts. It's Han who notices he's alone, and sends Leia over. Then he watches the two of them smiling together, and points the interaction out to Chewie.
Here ends the Original Star Wars films, and I shall close with two things-
1) A great Star Wars Mystery:
What in hell is the normal entry method for a Chicken Walker when there's no platform around?
2) My most important observation of this movie:
I totally would have kept the hat.
Click to continue
Click here for intro and index
Posted by Jeff McGinley at 2:00 PM

Yay! I didn't talk about that this time, because I went into it when I wrote about showing these to Anabelle, but I'm glad you brought it up, thanx!

I feel like I've seen a shot in subsequent cannon where a chicken-walker's repose is to sit all the way down on the ground. So the pilots/crew would clib onto the top and enter the same way Chewy did. It'd be like a tank.

That was my thought too, but I couldn’t find it when I looked. And they definitely haven’t shown it on screen.