The Subtleties of Road House

Way back in the spring of last year, I upgraded to Blu Ray and rewatched Road House.
My intent was to write a post about the "Forgotten Awesomeness of Road House."
While not approaching The Electric Company levels of delay, clearly something prevented me from getting my thoughts together to write that.
It finally hit me what the issue was.
No one who has seen Road House can forget how awesome it is.
Released at the end of the decade, it was completely filled with Eightiesness.  As I've pointed out before, the Eighties were stupid is so very many ways, but we had the market cornered on awesome.
How Eighties is Road House?
Patrick Swayze had a feathered, teased mullet with a spit curl!
What I eventually figured out is that, while the awesome is what everyone remembers,  I believe that it is the subtleties of this film that give it layers and make it as enduring as it is.
The fact that it was intended to be, and is, a Western, is not subtle. Much like The Mandalorian is proving now, people really do still love westerns. However, they have to be disguised because people either don't know or refuse to acknowledge that they do like them. 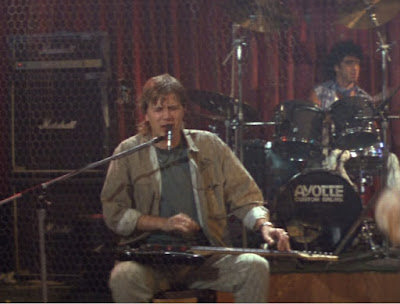 I know the music also clearly isn't subtle, it's amazing.  However, having fantastic old time rock n' roll non stop through an Eighties picture is an unusual feature.  Jeff Healy plays a character inspired by the writer seeing him perform.  The reason many of Healy's numbers weren't on the soundtrack CD was the band would play at lunch time, and many of the music scenes linking the plot sections together were taken from those lunchtime jams.  In fact, the only incidence of Eighties pop music in the story is when Dalton arrives at Wesley's and Denise is exercising to it.  Ben Gazzara's delivery of, "Turn that $#%& off!"  is a fine meta moment.
Considering it is a loud, raucous, fight filled extravaganza, starring incredibly fit people of both sexes who have no idea what the word "modesty"  means (or in some cases the word"foreplay" ), looking for subtitles may seem like a stretch.
But hear me out:
First of all, there's moments with our hero Dalton- Mister "Pain Don't Hurt" himself.  When Doctor Elizabeth (Kelly Lynch) asks him about majoring in philosophy, he starts talking about it seriously. Then when he sees she's impressed, his defenses pop back up and he covers with "$#%& like that," 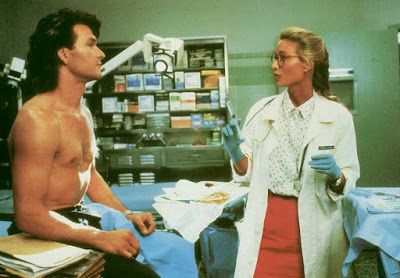 His defenses are almost always up. Whether he's working, or hanging around, Dalton only drinks coffee...until Wade Garrett arrives. Only then do we see Dalton have a beer...because he knows Wade's got his back. 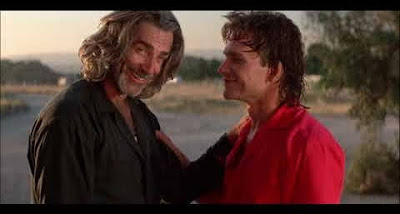 Since Road House is a western, substituting bouncers for gunfighters...
like ya do...
It is chock full of fightin'.
However, because Jeff Imada is an amazing fight coordinator, they tell stories as well as being entertaining brawls.  Nine (at the time, I think...I've already spent far too much time researching this goofy film) black belt holder Benny "The Jet" Urquidez worked with Patrick Swayze's dance background to add grace and artistry to his movements.   Urquidez trained all the actors and there were no stunt doubles for the fights.
The fighting styles of Dalton's bouncers evolves throughout the film as well.  Just as the Double Deuce appearing in the background becomes more civilized looking and cleaner as the story progresses, so too does the combat style and coordination of its bouncers.  As time passes they can be seen working as more of a unit, whether following Dalton's lead or independently.  In addition, the moves they use are more controlled and effective as the story continues.
How tough is the Double Deuce gang?  The quiet guy tending bar who is minimally involved with any fracas is KEITH FREAKIN' DAVID.  One half of Mr. Imada's contribution to cinema history in one most epic street fights ever recorded on film in They Live. 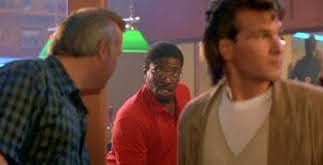 If that's not enough to convince you, remember that Wesley's blonde bombshell, arm candy Denise, was Julie Michaels, who went on to be an accomplished stunt performer and coordinator.

While generally staying as far away from subtle in most of her scenes, there are moments with Denise.  She and Kathleen Wilhoite (Carrie Ann) were close friends.  Michaels is the one who pointed out to the director that Wilhoite could sing.   It can be clearly seen when they're interacting during the general "hanging around" or "ridiculous carnage" scenes in the Double Deuce.  It shows that Jasper is a tiny town, and the Double Deuce is the only hang out. There will be friendships between people on "opposite sides" just due to the geography of the place.
Another nice, but subtle,  touch is you can see big Jack and Carrie Ann become an item only through background interactions and without dialogue. 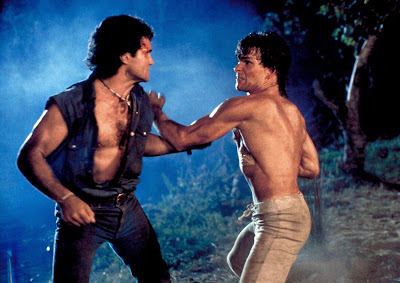 Back to the combat- The subtitles show up in individual fights as well. Everyone remembers the climactic "throat tear." (which I am not saying is subtle) My favorite moment in that battle is an earlier one.  Jimmy's mouthing off and threatening the whole time, while Dalton keeps his quiet calm.  Then there's one brief expression, where he blocks Jimmy and gets a small, knowing grin.

At that point, he's aware he can win this fight at any time, and the choreography afterwards shows it. It continues even when Jimmy cheats and belts him with a log. ( It was accidentally a real one, not a prop, but they kept going because...awesome.) All throughout, Dalton fights knowing he's got this. It's only when Jimmy draws a gun that he goes over the edge.
There are some subtle bits to the villains as well.  Yes, the same group that drove a Bigfoot 4X4 through a car dealer.  Like I said, there's more to Road House than the subtle stuff.
Brad Wesley mentions being from Chicago, which is odd since Ben Gazzarra clearly has a New York accent.  The most probable reason is that Hollywood always associates New York with toughness, as they should.  However, it's also possible he has some connection from his youth or family to organized crime (given his mannerisms and tastes) and after his stint in the army couldn't cut it with the big boys, got shifted from city to city and finally ended up running a protection racket in Jasper Missouri.

He's got all the methods of a typical mafia set up, but not the soldiers.  Most of the people in his gang look to be recruited from local businesses' middle management.  This is where his experience in the army comes in.  He's the only one who does anything remotely effective with a gun.  He actually damages Dalton. Everyone else shoots a lot, hits nothing and gets disarmed and taken out.

That's because their day jobs are staffing department stores or something, (Brad says he brought in the mall.) They are all looking to move up in the world via Wesley's criminal organization.
Side note- Casting Gary Hudson as the sleazeball "Steve" using a similar look and accent to his role in Brisco County Junior always makes me feel like Sheriff Arron Viva must be rolling over in his grave at how far his family has fallen. 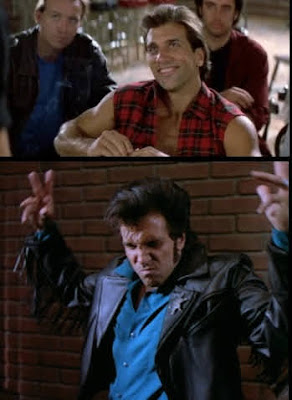 Of course there is one true, dangerous, and full of guile master criminal in this story.
We see Wade Garrett take out four guys without breaking a sweat when he first arrives at the Double Deuce. (Click on his name for more about his awesomeness, that's why this post is light on him.) Yet, someone killed him with a mere knife. (Assuming he wasn't faking to inspire Dalton...I can dream.)  The guy who claimed the blade from Dalton's Mercedes's gas pedal showed no more fighting ability than any of the other mooks when he was disarmed and easily perforated using his own weapon by Dalton. There's no way he had a shot against Sam Elliot, even with help.   I think it was someone else's blade.
Which bad guy is the only one clever enough to avoid physical and career affecting punishment from Wesley for a failed mission?
Which bad guy was always seen to slink out of the picture when a fight started, and then appear in a tactically advantageous location behind his opponent?
Which bad guy is the only one to injure Dalton to a level that he required a trip to the hospital?
Note- he did use a knife for that during the fight in Tilghman's office. 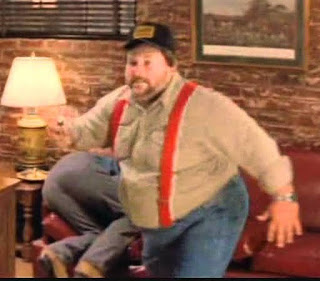 Which bad guy is the ONLY member of Brad Wesley's criminal empire to not only survive Dalton's rampage, but hide behind a mask of ineffectivity so that the old "cowboys" from town who came in to save the day didn't seek retribution.
"Polar bear fell on me," indeed. 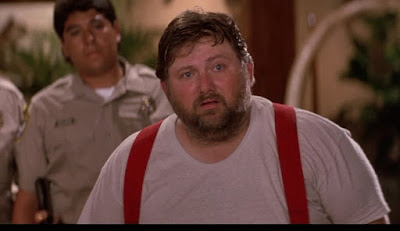 Road House II: The Wrath of Tinker could have been epic.
In closing, let's not forget the valuable lessons of Dalton's Three Simple Rules.
1) Never underestimate your opponent. Expect the unexpected.
Valuable in combat, in project planning, and in risk assessment.
2) Take it outside, never start anything inside the bar unless it's absolutely necessary.
There is a place and a time for work, and disruptions should be handled elsewhere if possible.
3) Be nice... until it's time to not be nice. 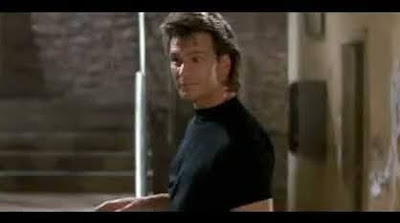 Most people forget how effective the first part of this is in almost all social interactions, and truly do not know, and would therefore need Dalton to tell them, when it is time to switch.
Huh...
I thought this post would be bigger.
Posted by Jeff McGinley at 2:00 PM

Perfect review...and of course who could forget these two fantastic lines in the movie. The subtly spoken in the background of a different conversation. "She's got a suck that could start a Harley"
And the not so subtle, "Calling me sir is like puttin' an elevator in an outhouse... it just don't go"

Thanx much. I mentioned the second one when I gave the film a George Award a while ago...along with the other genius line: