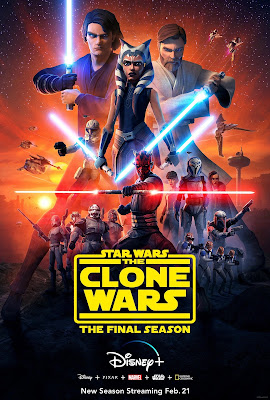 Disney Plus not only returned us to glorious old school style live action Star Wars with The Mandalorian,  it allowed the crack creative team to end the excellent animated Clone Wars series properly with a final season.
In true Star Wars fashion, the ending came in a trilogy of movie length stories Each one was made of four episodes.
1. "The Bad Batch"
2. "A Distant Echo"
3. "On the Wings of Keeradaks"
4. "Unfinished Business"

5. "Gone With a Trace"
6. "Deal No Deal"
7. "Dangerous Debt"
8. "Together Again"
9. "Old Friends Not Forgotten"
10. "The Phantom Apprentice"
11. "Shattered"
12. "Victory and Death"
The final arc of the Clone Wars saga starts with a nice Ani and Obi tribute to one of the first battles shown in the movie that kicked off the series.  Then Ahsoka teams up with Bo Katan and her crew to go after Maul, while Ani and Obi head off into Episode III.  The fall of Anakin and the issuing of Order 66 goes on in the background and we get to learn how this affected everyone's favorite Padawan, Captain Rex, and the rest of the gang on their way to Rebels, Solo and of course, The Mandalorian.
Click Here for Other Seasons
Click to Continue to the Bad Batch
Posted by Jeff McGinley at 11:00 AM