As she had been separated from her family for far too many years, we planned a trip to visit Rosa’s sister in Denver while Anabelle was out of school.  Luz Maria immediately started sending us brochures of things to do, and I volunteered to set up a Disney like spreadsheet to organize our days. Rosa insisted that this would be a much more relaxed vacation, and we would not need a spreadsheet. Imagine my surprise as the flyers and e-mails with links to websites intensified the week before the trip when I found a grid listing various Museums, Zoos and comic stores cross indexed with the days of our trip.

Being a responsible adult, I did not gloat about this fact.

Being a male, I did write “Ha Ha!” at the bottom of the spreadsheet.


Schedule and supplies in hand we accepted the very gracious offer of Uncle Dave to pick us up at some ungodly hour of the morning and drop us at Newark Airport.  We dragged the dead weight of our carry ons (carrions?) over to the gate, stocked up on sandwiches and snacks for the flight and proceeded to board on time for our departure on a clear, sunny and gorgeous day.

Needless to say, there was slight concern and discomfort in the cabin.  The Captain offered the option of exiting into the gangway to stretch while the plane sat there.  Rosa took the option expecting to rejoin us shortly.  When she got out, she learned:

1) There was no re-entry until the plane was ready to go again, meaning she couldn’t come back to us.
2) The air conditioner was back on and Phineas and Ferb was available on the TV, meaning Anabelle was much better off on the plane than in the airport.
3) Rosa had left her sandwich, reading material, and extra cash on the plane, meaning the wait was going to feel even longer than it actually was.

One good side effect from all this was found when they finally let her back on the plane. (I’m assuming the repair involved duct tape and bailing wire, based on how quickly it was finished once the expert showed up.) The buffalo sauce from my lunch had run all over my wife’s sandwich while they sat marinating together under the seat.  The two sandwiches were indistinguishable, and Rosa ended up enjoying the buffalo sauce a great deal.

It turned out to, eventually, be an uneventful flight, with only mild hints of dropping screaming out of the sky. Another good side effect was the airline, feeling guilty about making us sit there worrying about dropping screaming out of the sky, gave us free TV for the trip.  Rosa enjoyed it, while Anabelle, having spent enough time watching TV, followed in my plane reading footsteps and polished off the first Sideways Stories from Wayside School book and some Spider-Girl comics on the way out. (I’m so proud.) As we exited the plane Anabelle and I were thrilled to see fossil and dinosaur drawings all over the floor.  Fossils are sticking up out of the freakin’ ground all over the area, which is extremely awesome, and it’s nice that they celebrate this as soon as you get there. 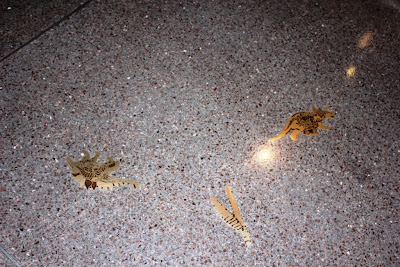 Once we reached windows, I immediately pointed to some dark clouds behind the nearby fog and told Anabelle that they were mountains. Unfortunately, I had no idea the airport was on a plateau away from the mountains. I’m not exactly what you’d call a seasoned traveler, as can be noted from the fact that I was confused as we drove the shuttle away from the airport and didn’t pass any purple signs saying we were entering the Magic Kingdom.

Luz Maria also arrived a little late; because a giant truck forced her off the wrong exit, and then her GPS refused to work in an effort to kill her on the way to the shuttle station. (She has the same model as we do.  Coincidence? I think not.) The expanse of uncrowded space really blew me away after a life in the New York City area.  Luz Maria lives about three times as far from the Denver Airport as we live from Newark Airport…and it takes almost exactly the same amount of time to get from our respective homes to our respective airports.  Part of the reason for this is the 75 MPH speed limits, which are unheard of in our densely populated neck of the woods.

These highways also cast another difference in our areas into sharp relief.  Alongside almost every road out there are small paths on which one can find many health conscious Coloradoans riding their bicycles with safety helmets protecting their heads from impact should they take a tumble.  What is truly amazing is the slightly less health conscious Coloradoinarians all over the highways themselves tooling along at just over the speed of sound on motorcycles  with no helmets on at all to protect their heads from becoming a multicolored smear next to one of the bike paths.

Our original “not really a spreadsheet” schedule called for the required week’s shopping to be done the day we got there, and that was still the plan as we drove back from the shuttle stop. Sadly we had reversed the time change, and instead of our bodies thinking it was four o’clock as we expected, they thought it was eight o’clock with all the exhaustion and hunger that comes along with that.

We figured we could eat dinner and then shop, until I fell asleep on the couch and Rosa and Anabelle decided they too could no longer move that day.  Making the first of many adjustments to the schedule, we collapsed, also for the first of many times.