“They have grumpy fish too”
Our first full day started out with my making eggs for Anabelle while Rosa reconfigured the schedule based on the fact that we didn’t have much else to eat except the eggs.  Luz Maria and I contributed greatly to that need to reconfigure the schedule by initiating our complete inability to navigate for each other and getting thoroughly lost on the way to pick up the rental car.  Based on Joe selling Chrysler vehicles for years, and Aurora’s favorite color, I chose an Orange Dodge Caliber.  I was warned that the car was slightly lacking in pick up, which it did, in much the same way the Sun is slightly lacking in swimming pools.  Once equipped we headed back to Luz Maria’s house to find Rosa busy taking pictures, with her super deluxe magic Cannon camera, of the elegant layout  and décor of the place in a fashion which indicated I was going to be living in multiple episodes of While You Were Out  when we returned home.

The women headed out to do the much needed shopping while I took Anabelle to the pool and then learned how difficult it was to get in and out of a wardrobe while playing hide and seek in a home with otherwise limited hiding spaces. (It’s amazing what we do for our kids.)

After the shopping trip, Rosa and I demonstrated true compatibility by discovering we had independently decided that the Aquarium would be a good choice for this newly shortened day.  The drive downtown to the aquarium fully confirmed two items:

1) That no matter how well we got along, there is no way on Earth Luz Maria and I should ever navigate for each other. Rosa earned permanent shotgun position, which worked out great as she is also the only one that the GPS has not tried to kill on occasion.

2) The utter lack of pick up in the Caliber, which meant the impressively high speed limit signs were mocking me for the entire trip. After the first attempt to enter a highway on a hill, we named the car “The Big Orange Sissy”.

We managed to reach the Aquarium with only a reasonable amount of screaming, due to my missing a poorly labeled exit. (And I’m from New Jersey, if I’m saying a road sign is incoherent, that's pretty dang significant.)  By the time we got there, it was time to eat, and we were definitely impressed.  The place has a “Coral Reef” type restaurant (to drop another Disney reference) that may have been the best non-home cooked meal I had there.  Anabelle had “Barracuda Sliders” and made sure to thank any passing Barracuda in the giant tank for the great burgers.  Rosa acquired two new friends as a pair of odd looking fish kept swimming up to stare at her. Since she didn’t have a seafood dish either, they must have just noticed how cute she was. Either that or they were chastising her for marrying someone who was eating their friends.

Completing our excellent repast, we wandered through the gift shop and up the stairs to the aquarium proper.  The place was much bigger than it looks like it should be for the size building it is in. There’s a fair amount of clever turns around the big tank that must be internally compartmentalized somehow to allow multiple viewing environments. (What can I say, I’m a fish fan.)

Before we entered the main tank exhibits, we were passed by a couple of mermaids being dragged by on a wagon for a meet and greet. (See, I’m not the only one over influenced by traveling to Disney World.)  Luckily, Anabelle was happy enough waving to them, letting us avoid the pointlessly long line to get a photo with a couple college interns in uncomfortable bathing suits.

Anabelle displayed the same combination of knowledge and paranoia I had at her age. (I knew how much a blue whale weighed as a kid and was convinced that the little wires holding up the one in New York’s American Museum of Natural History would snap, dropping the beast on my head. It never occurred to me that it was fiberglass.)  Anabelle got very excited in the shark tank room, until she spotted a sawfish swimming beneath an under floor window.  She then ran in abject panic. I found out later that her knowledge of power tools from Mami’s home fixing shows convinced her that it could saw through the window.  Luckily there was a jellyfish exhibit nearby and she suddenly decided that she was a big fan of the invertebrates she had been scared of up until five minutes earlier. I guess she only has limited irrational fear space.

To make the day extra fun, they have more than just aquarium animals there, and a screeching parrot in the jungle room ended up startling the boojeebers out of her shortly after we calmed her down - following in my footsteps yet again, as I was terrified by one at Parrot Jungle as a child, scarring me for life and making me never want to visit any non-Disney attraction in Florida.

These kinds of exhibits have way too many helpful people around them these days. I used to be able to happily tour through them, dispensing smart aleck comments as needed.  This day, Anabelle asked what a large unpleasant looking creature was and I astutely informed her that it was a “big ugly fish”.  At this point the Coloradoman Aquarium representative around the tank happily replied, “Ah, I see you’ve found our Big Ugly Fish.” Embarrassingly, I can’t remember what he told us it is really called. 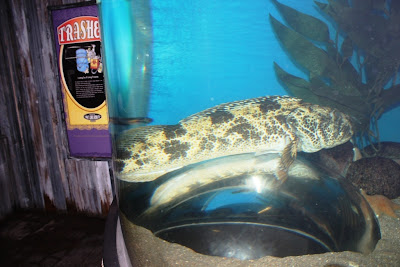 Another example of the differences in personality and temperament between the Colorodites and the New Yorkers we were used to popped up on this visit. Three separate people came up to me after seeing our Dog Food For Chairs shirts and politely inquired, “I really like your shirts, but I was wondering if you’d mind if I asked what it meant?”  This is in stark contrast to the reaction the shirt generated in the Brooklyn Aquarium, which was more along the lines of a pointed finger accompanied by, “What da hell is dat?”

We all got quite a surprise when we rounded the corner in the jungle room and found the tiger.  The large an impressive cat is not what one expects when looking at fish and other sea life, but the feline wasn’t complaining, so I won’t either. Rosa used her super deluxe magic Cannon camera to take some impressive shots of all the creatures, land and sea, finally scoring a good seahorse picture after a decade of failed attempts with other cameras.  Anabelle was using the backup camera to try and take close ups of the fish, slowing our progress to a crawl. Later days we used the much more efficient method of her pointing at what I should take using the backup camera. No one else, of course, was normally allowed to touch the super deluxe magic Cannon camera.

In the jungle room was also a display that completely amazed Anabelle. There was a tank containing a breed of fish that are all born male, then become female later and get pregnant.  While confusing at first this memorable item helped her a great deal to understand both tribbles, and Chaz on Dancing With the Stars.

We finished up in a little display area at the top of an oddly lit escalator tunnel, which only came up to us.  This was the final clue that taught us that we had, in fact, gone through the entire Aquarium backwards.  We took the elevator down. It was the only way for limited mobility guests to go up, and limited clue guests (such as ourselves) to get down.  Then we rode up the impressive and fancy escalator, went back down the elevator, grabbed maps which would have been much more helpful at the beginning, rather than the end of our day.  We returned to the gift shop for souvenirs and a deep sea action figure, that we named “Scuba Steve”.  (Thank you Adam Sandler.)  Entering the parking lot, the advantage of the color choice of the “Big Orange Sissy” became immediately apparent as to how easy it was to spot in the lot.

Denver is the home of Mile High Comics, a place advertised as the World’s Largest Comic Store.  (Its existence had nothing to do with our visit…really.)  Apparently the whole “World’s Largest” thing is connected to their internet warehouse. We first tried what they called “The Mega Store”.  It proved quite difficult to find since the only sign outside the place was hanging in the window, and hand drawn with sharpies. It seemed to be filled with overstock back issues, trades and statues from the warehouse…big, but not really all that Mega.  In fact the affiliate store in Littleton, we all decided, was far more Mega.  It had a great deal of interesting vintage collectibles and one of the largest collections of indie back issues I’ve ever seen.  Despite what everyone suspects I did not spend our life’s savings in these stores. (I wasn’t even tempted, indicating the distinct lack of Meganess.)  I bought a single comic, some souvenirs, and Aquaman glass in the one we went to another day, because, “Hey, it’s Aquaman!”

We then began what became an important daily tradition of racing back to Luz Maria’s for whatever was planned in the evening.  In this case it was her Zumba class that Rosa was accompanying her to.  After dinner, Anabelle and I had some quality snuggle time and talked about when she got scared in the Aquarium. I reminded her of the whole “overcoming fear” angle in the Green Lantern movie. (While very wrong to my Silver Age sensibilities, it did come in handy after all.)  With the help of the box of some clearance action figures Rosa got her after class, I cut out a picture of Green Lantern that she could carry with her, and hold any time she got nervous.

Once Anabelle went to sleep I attempted to take notes in order to prepare for writing this travelogue.  After being woken up by my loving wife for the fourth time with the caring phrase, “You fell asleep on your face again.” I gave up; hence the spottiness of these recollections.