“A New York Tyrannosaur, you’d think we’d have noticed that on the plane”
We began this day by all visiting the pool. Anabelle continued to practice her headstand, while I continued to swim butterfly because the pool was too small to do good overhand laps in. Of course that meant I set up a standing wave forceful enough to continually knock over my daughter. (Excellent parenting there, Jeff.)

I had a quick discussion with Luz Maria’s financial analyst on the phone, where we both agreed the best way to handle long term investments in the current economy is leave the statements unopened in a drawer. (Perhaps that’s what my history teachers were droning on about when they mentioned Laissez Faire Economics?)

Following that amazing fiscal advice, we headed downtown again.  First we had to stop and fill up the Big Orange Sissy, where I was able to engage in the same, “Something strange is afoot at the Circle K,” quote and photo I do every time I travel west of the Mississippi. (Exceeeellleent!) Then it was on to the Denver Natural History Museum.  Since fossils are sticking out of the freakin’ ground there, we were in for a treat. Luckily we got semi lost in the parking lot, and wound up near the underground garage where they have a full size statue of a camarasaurus battling a ceratosaurus.  Anabelle and I suitably dino-geeked out a great deal while Rosa and her sister patiently allowed us to dino-geek-out a great deal and took pictures to document the dino-geek-outing.

Entering the museum we found ourselves face to face (or face to foot anyway) with a full size Tyrannosaurus Rex skeleton.  Later I discovered the mounted position was designed by my personal favorite paleontologist Robert Bakker. (Doesn’t everyone have one?) It is based on the pose on the cover of his book The Dinosaur Heresies (which if I had found earlier in life, I would have probably been a paleontologist instead of an engineer.)  However, without the context of the battle against the styracosaurus in the drawing, I didn’t recognize it, and told the ladies I was with that the skeleton was an example of a prehistoric predatory theropod who had won the Heisman Trophy. (As usual, continuing my legacy of being very educational to have around.)

Lunch was, as always, an adventure.  This is because no matter the personality, temperament or location of the people involved; the question, “Do you have any grilled chicken?” seems to be far beyond the ken of cafeteria workers the world over.  Eventually full, we set about exploring the museum.

First off, a confession. Having been practically raised in New York’s Bronx Zoo and American Museum of Natural History, I am extremely jaded when reviewing these types of places elsewhere. Therefore when I praise one of these joints, you can take it to the bank.

Much like starting on the fourth floor of the New York museum every time we go, we began our exploration of the Denver museum in the Paleontology Exhibit on its third floor.  While not as expansive a collection as New York, it was extremely large (as, I believe I mentioned, fossils are sticking out of the freakin’ ground in this area), and the use of detailed dioramas between the bones livened up the exhibits considerably. The layout is also done chronologically rather than taxonomically as the AMNH is, which serves better to tell a story in my less jaded than I originally thought opinion.

Now to be a total dinosaur geek for a moment (or a lifetime, in fact): THEY HAD A DIPLODOCUS!  We’d never seen one before, AWESOME!  We also got a welcome from an old friend. In a display next to the diplodocus, was a comparison of the way various dinosaurs’ skull shapes provided evidence of what their life was like. I spotted a familiar toothy smile from across the room. The Tyrannosaur skull was a cast from none other than the New York museum skull I have been viewing since I was a fetus.  In between more dino-geek-outing, Anabelle and I took the time to educate Rosa and Luz Maria about what we were viewing.  Rosa was able to follow along most of the chronological path as it followed the Dinosaur Game we’d been playing Up the Lake. (A curious combination of Candy Land and Trivial Pursuit where you follow a colored path through various prehistoric ages.)  Anabelle spent a fair amount of time at the learning booth at the end, asking the attendant questions and teaching the other kids. (That’s my girl.)

Remaining on the third floor, our next stop required much holding of Anabelle’s new Green Lantern totem, the mummy exhibit.  She managed to keep herself together for most of it, but we did take a very quick tour.  The most interesting part was the comparison of the “Rich Woman” mummy and the “Poor Woman” mummy.  Apparently, even in the Heliopolitan afterlife, the class divisions are mighty.

In yet another echo of New York museum trips, the animal and American Indian galleries were given much more cursory views than the prehistoric stuff.  Although I did feel the dioramas were much more lifelike in Denver. Not sure if it’s because they’re newer, the lighting is different or (more likely) I haven’t seen them eighty jajillion times throughout my life.

In a rare move, sanity was maintained on the trip by packing snack bags and water for all of us.  I believe I may have converted Luz Maria to my “Snyder’s unsalted fat-free pretzel and Jujyfruits diet plan”. A quick break with a nice view of the park probably headed off some tense moments later on.

The first floor had the rock and mineral exhibit set up to look like it was within mining tunnels. Again, less items than the New York museum, but better storytelling.  I think AMNH’s ability to make storytelling exhibits is actually hindered by the expansiveness of their collections.  Denver did cut some costs by having glass replicas of diamonds and some other precious gems. However, their gold and other mineral collections were quite impressive as they stick out of the freakin ground out there as well. (Probably right next to the fossils.)

The first floor also had a small insect exhibit, largely focused on dragonflies.  They can’t walk; you’d think I’d have noticed that after all these years Up the Lake. We finished up the museum (before the obligatory gift shop run for souvenirs and such) in the space room. As per most of our days, we had to rush due to overscheduled evenings, but we did stop to be nearly infinitely frustrated at the remote control air puck shuttle docking game, and at one demonstration.  Due to Rosa being from a much more equatorial location than New Jersey, she has often been surprised at the changes of day length and the fact that we have brightly sunny days that are ridiculously cold.  When I try to explain about axial tilt and things, the response tends to be eye rolling. (Although to be honest, I display a great many eye roll inducing behaviors making it somewhat difficult to pin down the source.) Since Anabelle had been asking similar questions, I led them over to the seasonal sunshine demonstration table, and the happy Coloradinian who was working there.  Following several meticulous and polite descriptions, Anabelle was still left with a blank stare.  I chimed in with some quick gestures and “bing bang boom” speed explanations that resulted in Anabelle saying, “Oh, I get it now.”  Rosa was concerned that I interrupted the man’s job, but I replied that Anabelle has far too much New York blood in her and needed a much faster presentation of information.

We made a last ditch attempt to be impressed by Mile High Comics at their celebrity store nearby, once we left the museum. Of course the GPS decided to pretend to not know the difference between the North and South end of a street, insuring our evening lateness.  While nice and filled with some interesting collectibles (including the aforementioned Aquaman glass) overall, Make Mine Funnybooks.

Likely due to our increased lateness, there was a communication breakdown on the way home.  We had a pretty good system most of the time. Luz Maria had MapQuest instructions in the back, Rosa the GPS in the front, and any time either of them needed to alter the course of the Big Orange Sissy, they’d speak English. All other conversations (including major disagreements between MapQuest and the GPS) took place in Spanish, and I could ignore them.  I was maneuvering the Big Orange Sissy through a left turn across a four lane highway (thinking about which could kill you in New Jersey, but things are much less denserer out there) and Luz Maria yelled “LOOK!”

What it lacked in acceleration, the Big Orange Sissy made up for in stoppability and we halted broadside to the highway while I rapidly scanned for the oncoming truck, train, jumbo jet or whatever prompted that level of “LOOK”.

I didn’t have to scan long as she immediately followed up the “LOOK!” with “A horse!”

Anabelle got to see a horse…on the side of the road…about thirty yards away... and I got to change my underwear, all in the same day.  I also got to lay down some more strict guidelines about which languages should be used for exclamations in the Big Orange Sissy.

We made it back to the house before our dinner guests: a family that is friends with Luz Maria who were originally from California.  That was another interesting thing we learned. Almost no Coloroadetians are native. We met people from Michigan, California, New Jersey, Texas, and Peru, but almost none from Colorado.  Anabelle got along really well with their daughter, Carly and they hoped to meet again.

They brought games which the kids played with Anabelle before Luz Maria’s excellent dinner, and we all played Guesstures and Telephone Pictionary together afterwards (following a brief detour outside for bike repair, juggling, and checking out the nifty rainbow that showed up after the thunderstorm of inconvenience during the bike repair and juggling.) 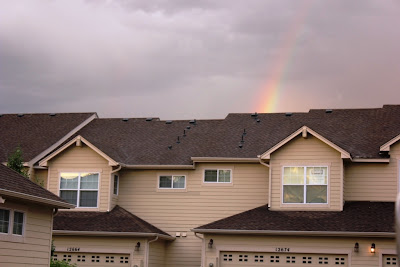 Several Facts were established that night:

-           A fourteen year old boy is always hungry and will gladly finish the remains of the table out of the pot itself with a serving spoon.

-           My mind works much like that of a fourteen year old boy. Proof:  After watching his dad fix bicycle hand brakes a mere fifteen minutes earlier, when we watched him mime grabbing handbrakes in Guesstures, we both yelled out “ZOMBIE!”

-           Luz Maria’s friends are way classier than I am, as evidenced by the complete blank stares my, what I thought was obvious, mime for “gas” generated.

-           In any game of Telephone Pictionary, even with children too young to understand some of the phrases, I am still the one whose interpretations will generate the reaction “And here’s where it all went wrong”.

In general, we had a very nice night with some very nice people, and then very nicely collapsed again in anticipation of the following day.

Yes, that is exactly what Telephone Pictionary is. And I was absolutely, hysterically, horrendous at every single part of it.
Thanx for reading!