This would be a good spot to publically apologize to some of the high school friends I recently reconnected with on Facebook.  When we first planned the trip, I figured there would be no problem with meeting up sometime during the whole week we were there.  The crazed overbooking of sightseeing we did, which led to my wife and daughter staying an extra week to do “girly things” with Luz Maria, also put the kibosh on that plan.  It looked like there would be a shot at it, which lead to what must have appeared as a giant torrent of insane sounding e-mails and phone messages from me trying to explain, or even figure out, where I was going to be. Luckily, my levels of insanity have remained about constant since high school, meaning this probably didn’t surprise anyone.

Equipped with our dual navigation system again, we maneuvered the Big Orange Sissy back to downtown Denver to sample an excellent Peruvian buffet that Luz Maria insured we made room for in our schedule.  I nearly ended up qualifying as “extra baggage” on the flight home after that meal.  The place definitely lived up to the buildup Luz Maria gave it, as did most locations she aimed us.

We needed to make the Sunday evening mass because it was “the pretty one” and more importantly, to meet up again with Carly’s family that we had met at dinner Friday night.  We looked at the zoo map and figured we could go after lunch and make it back in plenty of time. This decision was fueled primarily by my Bronx Zoo snobbery. As a kid, I assumed all zoos would be the same as the one I practically grew up in. The first visit to Livingston’s Turtleback Zoo was quite a surprise. After spending all of an hour there and seeing a couple reptiles, four chickens and a squirrel, I realized that all wildlife parks were not created equal. I’ve been to many other good ones, but as far as size and quality go, only San Diego can compare to my home zoo (and since I didn’t know the animals there on a first name basis, it still wasn’t as good).  Therefore, based on this prejudice, and the map, we estimated that Denver had the typical half-day size zoo.

Being on vacation tends to rob one of the sense of what day it is. This made me not realize we were going to the zoo on a Sunday in July until we pulled into the completely full parking lot.  As I said, I have been going to the Bronx Zoo since before birth, and have been a member for nearly that long.  There were years where I went more than once a month on a regular basis.  But I would NEVER go on a weekend in the summer.  The crowds near anything even resembling animals become impenetrable.  We drove over to a secondary lot, that is part of the park that both the zoo and museum are located in.  My mood brightened when I realized that if you added up all of the full zoo lots and the partially filled extra lot, it was still significantly smaller than the Bronx Zoo’s single Bronxdale Parking lot.  Wide open space culture shock hit again, as we entered the place amid what New York would consider a smattering of individuals.

We began the adventure, and I quickly learned I could not explain what a mongoose was without referencing Rikki Tikki Tavi, which Anabelle had neither seen, nor read. This slowed our start somewhat, but we quickly picked a direction (toward the bighorn sheep, obviously) and viewed many other animals we hadn’t seen in a zoo before (kangaroos, nosy antelope, etc) as we started touring the zoo counterclockwise. This is the opposite direction we tour the Bronx Zoo…I should have stuck with my O.C.D instead of my A.D.D. this time.

The large, mostly immobile, male bighorn sheep was suitably impressive, and we also got to see the rest of the family as the females and a couple extremely cute little ones came out. Bighorn sheep apparently haven’t bought into the current trend of using time outs and positive reinforcement to discipline children. One of the babies started climbing up a dangerous path and the mother laid into it with full head butts until it slid down and chose the safer path. We can learn much from nature.  The Dall sheep were mostly hiding as we passed them, en route to the first ever natural looking bear habitat built in a zoo. The place had quality and history. More importantly the place had an anteater.  The Bronx Zoo hasn’t had one of them in years, and as a kid I was a bigger pain in the neck than usual (which is pretty significant) in trying to find the hidden beasty every time we went.  My estimation of Denver Zoo was rising fast. Honestly, once the new Asia exhibit opens it may start to rival my home zoo in size.  A fact that became painfully apparent shortly. 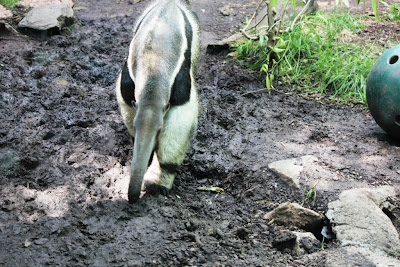 The ape and monkey houses were the first signs that we may be having schedule trouble yet again.  They were much larger and more densely packed with impressive exhibits than it would appear on the map.  Anabelle got to ride a dolphin while petting a baby gorilla.  No, the zoo wasn’t that awesome, they just had an endangered species carrousel.

The next stop was the bird area, featuring yet another varied and full exhibit house. There was also a large cage that allowed guests to feed lorikeets.  The first, apparently very hungry one, screeched whenever he wasn’t being fed, scaring the boojeebers out of Anabelle again.  Seriously, what do parrots and their kin have against my family’s boojeebers? She held the Green Lantern symbol on my arm as she forgot hers. (See, tattoos have practical uses.) That combined with the fact that the first one broke the tension by pooping on Rosa’s hand when she fed it calmed Anabelle down enough to try.  She got very good at it carrying her nectar from bird to bird, trying to make sure there was enough for all of them.  We were telling her we had to go as she asked to feed one more, and found one that must have been fed too often. As she pushed the nectar cup toward the lorikeet, it squawked and smacked the cup out of her hand.  Thanking the bird for reinforcing our timing, we continued around the zoo.

Once we saw the elephants standing in an elephant like fashion, and the hippo swimming in a hippo like fashion outside the pachyderm house, we added onto one of our standard family Bronx Zoo riddles:

Question: What smells worse than being in a room with a Giraffe?

Answer: The winter where you’re in a room with six Giraffes.

Question 2: What smells worse than being in a room with six giraffes?

Answer 2: Being in a room with a Rhino and a Tapir.

Needless to say, we didn’t spend much time in the pachyderm house.

By this point, the time crunch was all too obvious, and I became the ungulate scout, running ahead to each large enclosure to spot the hoofed mammal for the others to see, and Rosa to capture with the super deluxe magic Cannon camera.  We took a quick stop for the girls to buy ice cream, which was kind of ruined by the camels rolling in their own poop next to the kiosk.  I thought we had a shot at finishing on time, even with the back and forth zig zag to see the (beautiful but so distant to be invisible without the super deluxe magic Cannon camera) white wolf after taking a wrong turn at the sea lions.

Then came the discovery of a building which dashed all hopes of making it to church on time.  It was basically a mini aquarium laid out in a labyrinth, which we were now sprinting through. We did see a great deal of cool stuff in there, including full size komodo dragons and Nile crocodiles, but it’s all kind of an aquatic blur.

We made for the exit and discovered a house (once again) that was WAY bigger and more full than the map made it look. The big cat building was actually two structures with outdoor exhibits between them. This was fortuitous as Anabelle couldn’t bear the smell and stayed outside while Rosa and I went through to be amazed by close up views of multiple cats and striped hyenas (never saw those before, BONUS!) Anabelle got to see the hyenas outside, and also the impressive lion exhibit. The male posed and then stuck his tongue out at us; no doubt making fun of us for thinking we could see his zoo in half a day.

A very rushed gift shop visit ended the trip; so rushed that I managed to fall up the stairs following my daughter.  Luz Maria bought Anabelle a set of plastic animals (because she’s a softie) and I added to my collection of far too many big cat shirts, but at least this one doesn’t fit me like a sail.

The daily thunderstorm of inconvenience hit right on schedule as we pulled out of the parking lot and reduced visibility as we tried to coax something resembling the speed limit out of the Big Orange Sissy. Some quick changes in the parking lot preceded our entrance to church…which was joined already in progress.  The mass was impressive, with a power point display of lyrics on the wall and a full band. We ended up seeing Luz Maria’s friends afterwards, and apologized for not making it into the seats they saved for us.

I did notice that Denver Catholics seemed to take things more seriously and solemnly than what I was used to.   The Eucharistic minister said “Body of Christ” like he REALLY meant it.  This made me feel extra guilty (as all good Catholics should) because I was trying desperately to not burst out laughing in the guy’s face after seeing a baby in the front row with the exact same hairdo and expression as the baby orangutan we’d seen that afternoon.  Not sure if the extra fervor comes from the general temperament of the area, the distance required to get people to group, or just the thinner air.

By the end of mass all of us were starving yet again. We stopped off for some more fish and vegetables, and went home to eat and collapse, following some photograph downloads and Star Wars cards “Go Fish” of course.