Hello and welcome to the George Awards, where the highly entertaining use of profanity in film is saluted and recognized.

We’ll be starting off with the fan favorite “Fuck” awards.  Before scampering on to the official list, there are some special recognitions that need to be handed out.

Firstly, three in the “Almost” category. These are awarded to movies that could have, should have, were obviously meant to, but for some reason didn’t quite get all four letters out.

In 3rd place we have J.J McClure, Fenderbaum and Blake (Alias Burt Reynolds, Sammy Davis Junior and Dean Martin) from 1981’s The Cannonball Run.  With the Rat Pack there, we can be sure there was hot and cold running benevolent cursing behind the scenes.  Since Farah Fawcet’s f-bombs were expunged from HBO and video releases all that remains is the beeped scene in the bloopers.

“I’m gonna take these Rosary Bleeds and stick em up your nose.”
“These *BEEP*ing Bleeds?”

The 2nd Place Almost goes to Galaxy Quest’s Sigourney Weaver’s playing Gwen Demarco playing Lieutenant Tawny Madison. (Everyone got that?)  Upon seeing those “choppy crunchy things” that serve no purpose a proud and powerful “Well fuck that!” can be read on her lips. However, the ADR dubbing changed it to the more ratings friendly for the 1999 film, but less emotionally accurate. 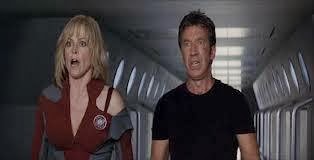 The first place “near miss” George award can only go to one person.  Young Peter Billingsley in 1983, years before he had to admit he “wasn’t Tony Stark,” perfectly illustrated the kind of nightmarish moment when “fuck” is the only proper word, where most of us kids learned the word, and the total an abject fear when we did use it in front of the parent who unintentionally taught it to us.
From A Christmas Story, the best “artificial fuck” in a movie: 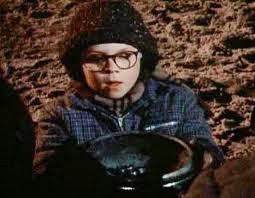 Enough subtlety for this episode.

On to the Hat Trick Citations for using “fuck” impressively and creatively at least three times.

“Fuck” is a pretty standard reaction for those greeted by the types of horrors that frequent Carpenter’s imagination.  However, he manages to pull off extra appropriateness and expression from his actors.

From 1982’s The Thing. That’s the original remake, not the sequel to the remake…I think.
Is there any other response that the line Palmer (David Clennon) spouted when the head of the co-worker he just had to set fire to because he turned into a monstrous alien shape shifter on the autopsy table, falls on the floor, grows spider legs and starts to run away upside down than: 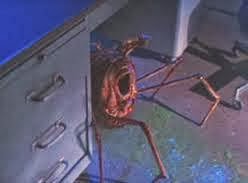 "You gotta be fucking kidding..."

Rowdy Roddy Piper was a walking quote machine as Nada in another Carpenter classic, They Live, but his reaction to how the subliminally hidden aliens appeared when he donned the sunglasses, that also made him high was quite memorable:

Finally, Kurt Russell dripped crazy awesome as Jack Burton all the way through Carpenter’s Kung Fu comedy Big Trouble in Little China.  His reaction to finding a paper wall in their way was practical, low key, and inspired.


Our next George Hat Trick winner is the former Governor of California, who has probably had enough “Oh Fuck” moments in his recent personal life to create his own awards show.

While profanity is by no means limited in his works, indeed Total Recall probably has too many to count, there are three iconic uses of “fuck” where his accented delivery have earned the man his George.

Predator (1987) features what may be the most honest reaction to a horribly monstrous alien ever recorded when Dutch realized:

“You are one ugly motherfucker.”

A more light hearted and humorous use came up in 1987’s the Running Man, in his reply (as ben Richards) to Maria Conchita Alonso (Amber Mendez) stating they should have gone to Hawaii. 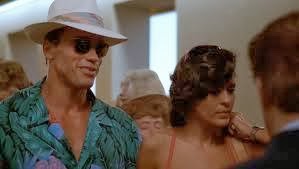 “I had the shirt for it, but you fucked it up.”

And of course, in his second breakthrough appearance in The Terminator (1984) his methodical and robotic presentation of a line placed it in contention to be his catch phrase.  Though he did use it in other films, “I’ll be back,” was much easier to include on television ads and lobby posters than: 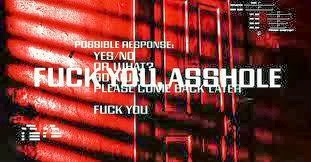 Though the first example was not delivered by him, he had enough involvement in 1991’s underrated, incorrectly advertized, and awesomely silly Hudson Hawk and was integral in the scene as Eddie “Hudson Hawk” Hawkins (Along with Andie McDowell as Anna) to get him credit for Danny Aeillo’s repetitions as Tommy "Five-Tone" Messina: 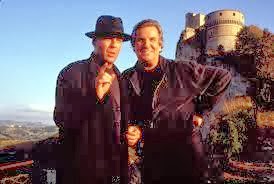 Continuing the theme of his less popular film appearances from 1991, the next one is from The Last Boy Scout.  The quiet, introspective multiple call backs to this line made by Joe Hallenbeck over and over again earns it a spot on the list. This is especially because he carried out on his promise after dispensing with the villain in a very satisfying way involving a long fall and helicopter blades.

Finally, this 1988 benchmark setting action movie is the reason that Bruce well and truly deserves the George Award. It is the greatest use of this particular compound word off the original list of seven.  Accept no substitutes, imitations, call backs, watered down PG13 versions, or television replacements by a fruit grower.  The original was not a pre-assault one liner, it was not a direct attack; it was the accepting of his “cowboy” status and a low key smartass barb against his enemy.  The original, from Die Hard:

The final two “Hat Trick” awards go to individual films.  Again, this doesn’t simply go to movies that indiscriminately fill themselves with profanity, but rather ones that pull off the difficult achievement of having a meaningful, funny and in some way surprising “fuck” multiple times.

The first of these two impressive recognition goes to Mel Brooks (who we’ll be hearing quite a lot from) for History of the World Part I (1981). His achievement is made more impressive by containing all three instances in the Ancient Roman section of the story.

Starting with the quietest and most subtle, is this exchange between Roman soldiers (Ron Clark and Jack Riley) after being felled by “Mighty Joint”

The second Award Worthy moment is expertly delivered by Gregory Hines as Josephus to Ronny Graham.  It gets extra points for being a hysterical joke in a mostly lowbrow film that requires knowledge of classic literature to get.

The crowning achievement of History of the World Part I is a glimpse into the Roman Senate illustrating how all governing bodies, from ancient to modern times, work. John Myhers delivers this stirring speech:

Speaker: “All fellow members of the Roman senate hear me. Shall we continue to build palace after palace for the rich? Or shall we aspire to a more noble purpose and build decent housing for the poor? How does the senate vote?”

Our final “Hat Trick” George for the Best Use of “fuck” is awarded to A Fish Called Wanda. Like every other piece of comedy the man has written, John Cleese’s farcical film is contains brilliantly precise large and small scale timing, as it explores (among other things) differences between English and American stereotypes.  These differences are highlighted in the use of “Fuck” in varied ways from either side of the Atlantic

Cleese himself, as barrister Archie Leach, delivers it using classic British manners in the following scene. 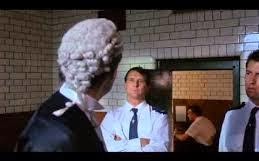 Kevin Kline’s lunatic Otto, on the other hand, displays the standard American levels of personal control practicing for his apology. 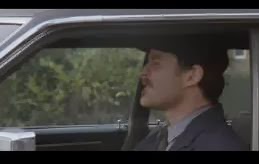 As a bonus entry (giving this film a “Grand Slam ‘Fuck’ George” I suppose) here is what happens when the two styles met: 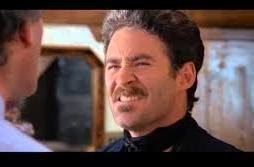 Otto: “You are the vulgarian, you fuck.”

They key award winning moment from this movie however, comes from neither Kline nor Cleese.  No it is George Thomerson (played by Tom Georgeson…or maybe it’s the other way around) belting out this inexplicableness to those on either side of the Atlantic: 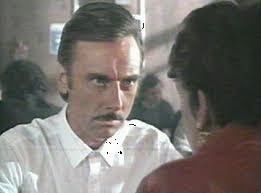 Thanx for joining us for the start of this celebration of obscenity.
Next time: Now that the specials are out of the way - the top ten!