George Awards: The Word You Save for the End of the Argument 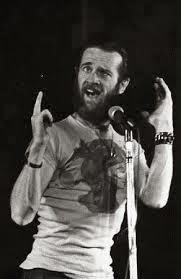 Welcome back.  With the special citations out of the way it’s time to get ready for the George Awards for the Top Ten entertaining uses of the word “Fuck” in a cinematic feature.

The honorable mention George Award goes to Steve Martin in 1983’s The Man with Two Brains. He earns it, beating out many others, because it was the only line under consideration that used the clinical meaning of the word, instead of as an expletive.
What sold the moment was the thoughtful pause before Doctor Hfuhruhurr concluded: 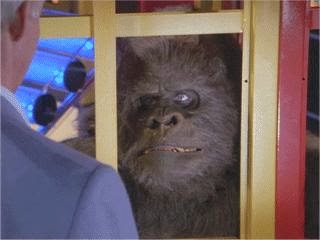 “I couldn't fuck a gorilla.”

The 10th place entry, if it wasn't in a New York based mobster movie, would have placed higher.  That genre is know for gratuitous usage, which cut the surprise factor down considerably.  However, the comic timing of the opening narration was damn near perfect, making 1993's A Bronx Tale completely worthy of the first George on the list.  The follow up to, "You would hear young Italian men romancing their women," was the direct, hysterical, and completely accurate: 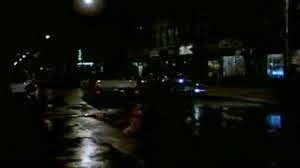 
Number 9 on the list is from the excellent 2011 remake of Fright Night.  David Tennant swore up and down the entire film in his role as Peter Vincent, the man whose "don't do anything I wouldn't do" list only included mini-golf and sushi.  However the one that truly stood out came after he identified a list of possible anti-vampire tactics while he removed his makeup and fake facial hair.  That allowed his delivery of a line while looking and sounding much more like a somewhat under dressed version of  the beloved and family friendly Tenth Doctor,
“Weeeeeell…maybe not the omelet.”
He then shattered the moment by exclaiming: 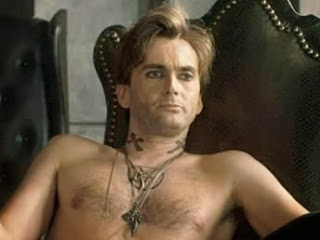 “How the fuck should I know?”
His next line –
“I read books, man! What?
You...you think I'm hanging out with Dracula and the Easter Bunny? Fuck off!”
Was icing on the cake.

Number 8 is a prime example of a PG-13 movie using its single “fuck” to great effect.  To keep that rating, a movie only gets one shot at the granddaddy of all swear words.  Beetlejuice (1988) used it wisely by having kept the dialogue on the squeaky clean side up until that point.  The title character’s (albeit spelled differently) establishing moment was cemented when he broke part of the tiny replica of the town he was skulking about, followed by Michael Keaton belting out: 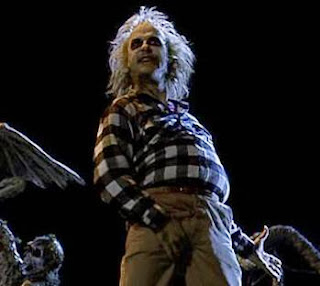 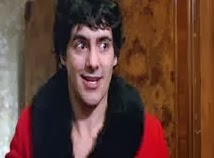 “Yeah, be rational, sure. I'm a fucking werewolf, for Christ's sake!”

The number 6 spot was far more deserving of a spot on the “Awesome Eighties Quote” list than several of the entries, but that was the point of forcing it to be a sci-fi, fantasy, and a  “family friendly list.”  At the climax of 1985’s Wanted Dead or Alive bounty hunter Nick Randal (Rutger Haur) delivered evil terrorist and tongue wagging bass player Malak Al Rahim (Gene Simmons) to the police.  Haur led him out to them by the pin of the grenade he had amusingly jammed in Gene’s mouth.  He told the authorities to send the bounty to the widow of his late friend.  The bounty hunter planned to pick up the bonus for the “or alive” part of the title personally.   What followed was contemplation about the relative values of money and revenge, culminating in a giant pile of awesome as Haur pulled the pin and stated: 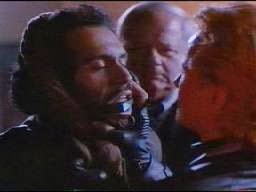 “Fuck the bonus.”
Watching the front man from KISS do a nifty little panicked dance before his head atomized only made it better.

The only non-English entry on any list is number 5 from 1986. (I’m not sure if the 80’s were truly the Golden Age for Precision Film Profanity, or they were merely when I honed my fluency in filth.)  In the Sci-Fi flick Critters; two of the titular, little be-toothed hairballs were minding their own business, when one got blown to smithereens by a shotgun blast.  The other one (voiced by Corey Burton, as were they all) did a vaudeville quality double take before spouting off a reaction in Critterspeak. The subtitle proved what I long suspected.
Every language in the universe has its equivalent to: 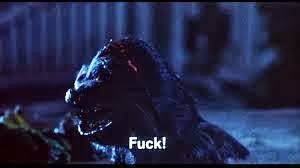 The ever awesome Bruce “Don’t call me Ash” Campbell will collect a pile George Awards in this exercise.  This one is number 4 on the list for a film he directed and shot on his own Oregon property, released in 2007. My Name is Bruce poked fun at both his image and his fandom.  It was, needless to say, awesome on many levels. One of those was the delivery of several high caliber curses, and not just the demonic kind. One that was pure Bruce involved his identification of a Chinese god of the dead and bean curd (awesome) by referencing a Japanese actor and somehow making it sound Scottish.
Because Bruce Campbell, that’s why: 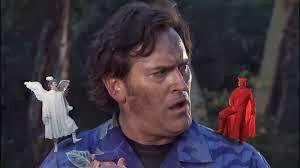 “You’re gonna take on Toshiro McFuckhead on your own?”
(Not the actual picture, but too fun to pass up.)

As we reach the top 3, it is time to enter the realm of true professionals.  Yet another from the director of American Werewolf in London, John Landis.  He could have easily earned a Hat Trick award if I didn't have bigger plans for him.

I realize that putting Eddie Murphy on a list of profanity that I’m partially basing on surprise uses sounds hypocritical.  First of all: Fuck you, it’s my list.
Second of all: I am also considering quoteability.
Billy Ray Valentine’s delivery of this line in 1983’s Trading Places, expertly used to stop an entire wild party cold, is the true and proper tone of voice to employ whenever the need arises for the phrase: 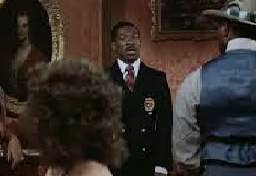 “Can I have everybody's attention please?
Get the fuck out!”

The coveted, if unfortunately named, number 2 spot goes to the classiest person on any of these lists, with the possible exception to the multiple upcoming Murder by Death wins.  The penultimate George goes to the first F-bomb to be dropped in the fifty year history of the James Bond movie franchise, amplifying this quiet moment to near the top of the heap.  It was delivered in Skyfall (2012) with inimitable grace and style during the final appearance of Dame Judi Dench herself as “M”:

And so we’ve reached the number 1 George Award winner for my favorite use of the word “Fuck” in a motion picture. Feel the tingling sensation of anticipation…or maybe it’s just a rash.

In other words, it was no Pandemonium.

There are only two aspects of the film worth mentioning. One is the gag of having the “body count” number appear superimposed on screen, which the Hot Shots franchise would do better.

The other is what wins this top George Award, in a fashion that is kind of the opposite of the Almost Awards from last week.
A third of the way into the film’s narrative, it stopped and cut to Charles L. Trotter dryly delivering the following monologue from behind a desk:

"Ladies and gentlemen, in order to achieve an 'R' rating today, a motion picture must contain full frontal nudity, graphic violence, or an explicit reference to the sex act. Since this film has none of those, and since research has proven that R-rated films are by far the most popular with the movie going public, the producers of this motion picture have asked me to take this opportunity to say 'Fuck you.'"

I can’t really think of a good way to follow that.


Come back in two weeks, since this type of post doesn't seem right near Christmas,  for the George Awards for Superheroes and Sons a Bitches.
Posted by Jeff McGinley at 2:00 PM

Again, these awards are for movies.

Maybe i'll do a TV one if I ever start watching enough series again.