Bondlets: On Her Majesty’s Secret Service 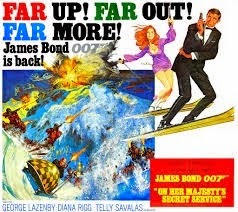 The early ones have different pacing than modern movies, and I know my daughter hasn’t been paying full attention to them when we watch. Bits of the sixties culture of the early ones gets lost on her, and some of it plain goes over her head.

But even with all that, she showed great delight upon seeing M, Q and Moneypenny when they appeared on screen.  The filmmakers created a world where even the minor characters leave a lasting impression.  She also recognized all the little things in the drawer as Bond cleaned out his desk, so I guess she was paying more attention than I thought.

Although for this one, she definitely zoned out a couple of times, and she wasn’t the only one.  She went far enough to compare the skiing scenes to Thunderball’s SCUBA obsession. Overall it’s a good movie, but it could have done with a fair amount more paring down in the editing room.

It didn’t help that she wasn’t much impressed with George Lazenby in his only turn as 007.

In fact, she decided to refer to him as “002, Phil Bond,” and thought he had an oddly shaped body structure, big ears…and “he runs funny.”

She found Diana Rigg very pretty (duh) and was amazed that this young, attractive woman was the ancient looking and excessively crazy Mrs. Gillyflower from the Eleventh Doctor’s “The Crimson Horror.”

I was proud that she immediately recognized the sound of Louis Armstrong; I guess my pop culture history lessons are paying off.

More education was needed however when she decided the Sporran Bond donned over his kilt was a “fanny pack.”  The fact that Sporran is Gallic for “purse” did not help my case.

Aside from the oddity of the Scottish formal wear, she pointed out, rightly so, that 1969 was host to a variety of ugly fashions.  It should be interesting when we get to the Roger Moore 1970’s films.

Again, sometimes things go over her head.  Blofeld’s plan to cause extinction in “livestock and cereal” had her wondering how and why he was going to end the existence of Lucky Charms, Frosted Flakes, etc.

Also, while fluent in Spanish, her German is lacking.  There the “Privat” (private) entrance to the ski lift was read as “Privet.” Once she locked onto that it was a long discussion filled with questions as to why they were all going to the toilet, and why the toilet had glass walls.

I believe this is more proof that smart-ass genes are dominant.

At least she’s still young enough to be grossed out by the “mushy” parts. In fact, she’s turned the lead secret agent into a verb. Any time he started kissing someone, she accused him of “JamesBonding” her.  She used it to excellent comedic effect:

"Don’t be JamesBonding her in the car, that’s dangerous."


"They’re turning away; even the horses are disgusted by the JamesBonding."

Finally, similar to everyone else who saw this unusual outing for 007, she thought the ending was far too sad.