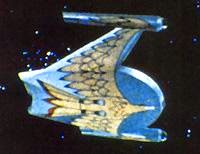 The episode opens in a chapel, which is odd considering that Roddenberry specifically created a secular future.  There can’t be that many shipboard marriages can there?  Sadly, this issue is resolved at the conclusion, for there certainly must be a great many shipboard funerals. 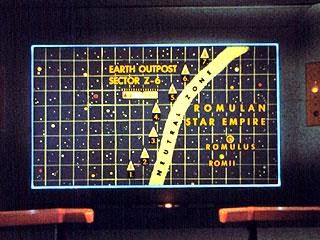 The introduction of the Neutral Zone comes with drawings on paper projected on the main view screen. I guess Starfleet doesn’t use “Google Galaxy” for maps anymore.

The anti-Racism is pretty heavy handed this time, as opposed to everyday episodes where showing all races working together as equals gets the point across nicely. Normally classic Trek is story first, but sometimes the moral smacks you in the face like a wet tribble.  Sulu’s eye rolls at Stiles's outbursts help add  some entertainment value to the sledgehammer subtlety.

It's kind of amazing that when compared to those who preceded him, when the impulsive, immature and scream filled Chekov shows up in season two, he's one of the most emotionally stable officers to sit in the Navigation post.  Starfleet's HR department must be run by the same group that handles safety protocols.

But hey, enough complaining; it’s the first appearance of the Romulans!  Yay!  The fact that it is Starfleet’s initial encounter with one of the two prime adversaries is huge deal.  At least it was until the prequel stories messed that up.  Prequel stories can do that to continuity sometimes. (Hello Star Wars!)

There’s still some early clunkiness here.  What they call “phasers” are actually “Proximity Photon Torpedoes” as anyone else who has wasted countless afternoons playing Starfleet Battles can tell you.

The Romulan technology is somewhat schizophrenic as well.  Their ship is clearly stated as sub-light, but the Plasma Torpedo it fires is catching up to the Enterprise moving at warp speed.  I know bullets move faster than tanks, but not to the extent that they use modified physics.  Then there’s the cloaking device, which works both ways.  This may be the most advanced version ever of the Bugblatter Beast of Traal’s idea of, “if you can’t see it, it can’t see you,” but played completely straight. I think that should have served as ample evidence that this was a stolen “Destroyer vs. Submarine” plot, and they could have forgone the “hear a wrench dropped through the vacuum of space” panic moment.

Some interesting character revelations in this one-
Based on his conversation in this Episode, and even more so on what is revealed later, Spock had to know Romulans looked like Vulcans.  Yet, he looks equally as surprised as the rest of the bridge crew. This is likely because the Romulan commander looked exactly like his dad. 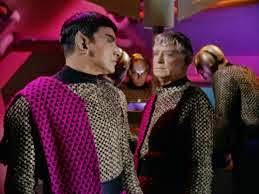 The reason the Romulans lose is obvious. Parallels are set up between Kirk and McCoy, and the Romulan Commander and the Centurion.  The Rom’s are missing a Spock to finish the awesomeness triangle.

Actually, both relationships and conversations in this one sound more like Captain Pike and Doctor Piper.  Maybe it was an old script?

The effect of Kirk’s hypnosis shows during the attack as he grabs Rand in a “Danger Hug” for the first time.

Lieutenant Uhura has a couple moments of awesome.  Not only is she at the Navigation board again when “Lieutenant Diversity Training” gets fired, but watch the scene when Kirk calls everyone to the briefing room.  She spins her chair around to face forward as they leave.

Based on who else was left on the bridge, she was in command.

Interesting technical note: after the inability to fire phasers caused by the leak in fire control during this story, the weapons are all fired directly from Sulu’s console in future episodes.  Scotty must have rewired it to avoid the issue recurring. 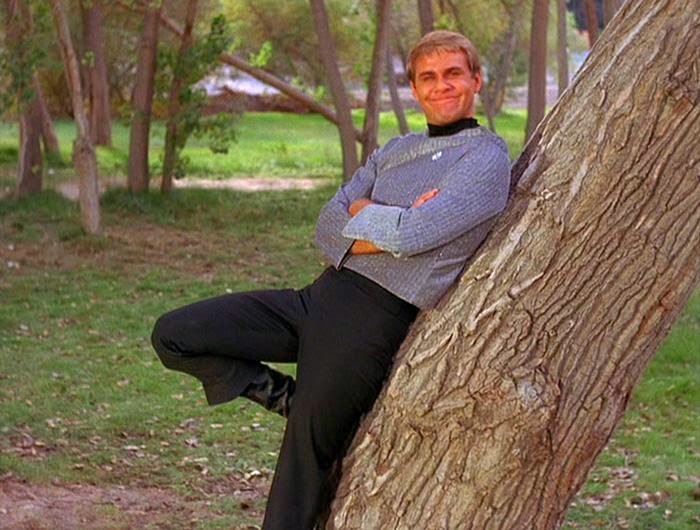 Sulu still likes botany, yay for continuity.  He also has a gun collection.  George Takei managed to use a bunch of throw away moments to build Sulu into a complex personality.  Sulu also shows the most panic, not about the weirdness they’re encountering, but about being stranded.  Given what happened last time he was stuck on a planet, this is perfectly believable. 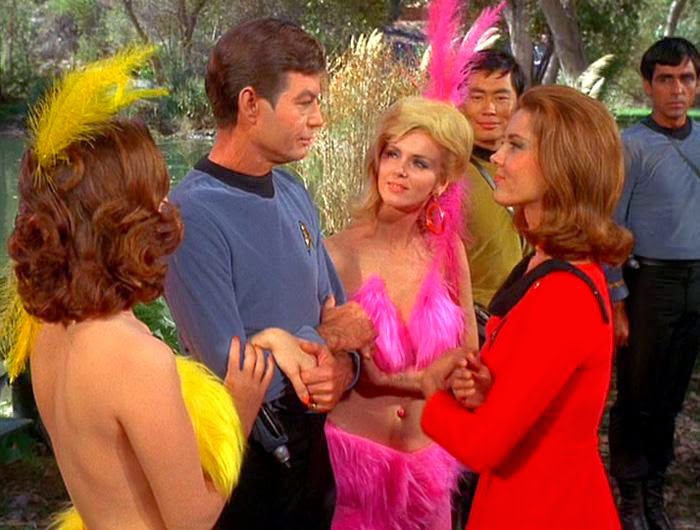 Deforest Kelley deals with a giant rabbit six years before starring in Night of the Lepus. He also gives the Captain a run for his money in the “you old dog” department with the much younger Lieutenant Tonia Barrows, who was nearly a victim of a self-fantasized assault, which we’ll try not to think about too much, ‘cause it’s icky. 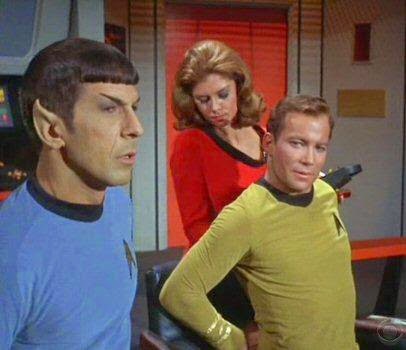 (In fact, we’ll leave it in the same bucket Kirk thinking his back rub came from Spock in the opening scene is, and move along.)

We also will have no jokes about Bones “bequeathing” the dancing girls to Sulu, thank you very much.  There will be a character versus actor discussion on those issues next season.

There’s more evidence in this one that the hypnosis has changed the good Captain.  We learn he was known as a “Stack of books with legs” at the academy.  Also, he meets Ruth, who has impossibly not aged since he last saw her.  That was a big red flag for him figuring out the Salt Vampire, and that creature wasn’t able to find a seductive form for him.  Now, Jim sees an impossible beauty and just goes for it.

Finnegan gives us additional peeks in to Kirk’s psyche, and not only because the main fantasy he conjures up is a fight with a bully on Vasquez Rocks.  Kirk is carrying a phaser and the revolver he took from Sulu.  Thus armed, he confronts Finnegan, who he suspects of threatening his ship and crew…and charges straight at him to engage in a fist fight. Sometimes the good Captain’s machoness overwhelms his tactical abilities.

The Episode leads to several questions, some of which can be easily answered: 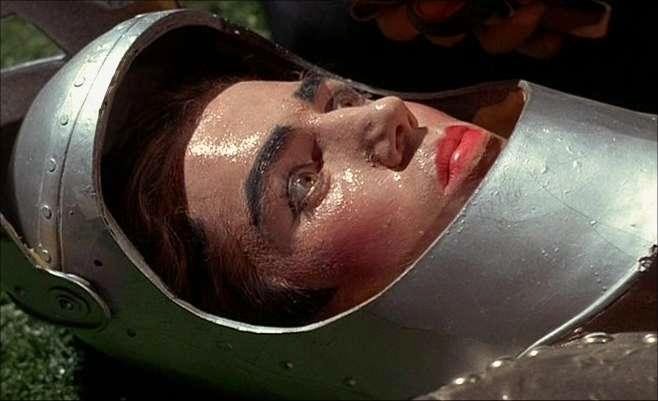 Why does the Knight not look as real as the rest of the robots?
Because the Captain “wished” to understand what was going on.

Why didn’t Uhura get any shore leave?
Because she was alone on the Bridge with Spock. (Woo woo!)

And other questions which are not:

Why, when they find a terrifyingly advanced culture that can pull thoughts out of anyone’s mind, create lethal items at a whim, and wield the power to raise the dead, do they decide it’s a bitchen’ vacation spot instead of imposing a Talos IV level quarantine? 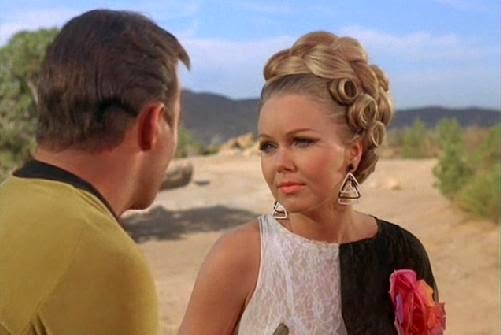 Why is no one on the crew concerned that the Captain is heading off, yet again, to fool around with a robot while highly romantic music plays?

Hey, this episode marks the introduction of the first butt headed administrator outranking Kirk that the Captain annoys and outwits.  With senior staffers like this, it’s clear how the terrible safety protocols came into effect…

Like, maybe, putting three senior bridge members on one shuttle in a dangerous area.
For shame!

The special edition is another episode where the space scenes shine.  Sorry, felt the need to point out how wrong I was about nay saying that idea when first announced.

The thread of Sulu showing extra concern for those stranded on a planet (like he was) continues in this one, as genuine empathy can be seen for his lost crew mates.

There’s two ways to view the main conflict of this episode:
One is that Commander Spock somehow forgot everything he knew about humans after bonding with Kirk, McCoy and others in this crew, plus his time under Captain Pike.

The other, is that he was purposely being a jerk to make the crew accept the fact that he was planning to stay behind himself.  He implies the “needs of the many outweigh the needs of the few” almost verbatim.  He sacrificed himself the time that he’s most famous for using that sentiment.

He probably was also faking being stuck under that big rock on the last run to the shuttle for the same reason since:
A) His incredible strength has already been demonstrated,
and
B) It was clearly made of Styrofoam.

It might be another case or Vulcan racism, but it seems more based on the way they go about their job.  From personal experience I can tell you this is accurate.  Spock, as the scientist, gets grief from those under him as he ignores their feelings while he over analyses every situation to try to find the perfect solution before implementing it. 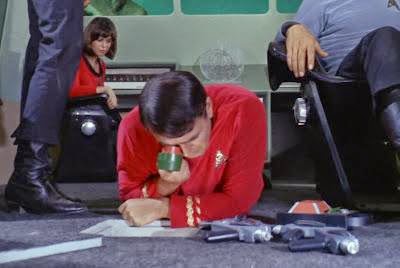 The same crew members have no problem with Scott, as the engineer, who keeps cranking out whatever options he thinks will work and ignoring impromptu funerals, and other “distractions.”

Scott’s also the first one that figures out the brilliance of Spock’s last minute Hail Mary play, continuing the trend of supporting his temporary commander’s decisions throughout. 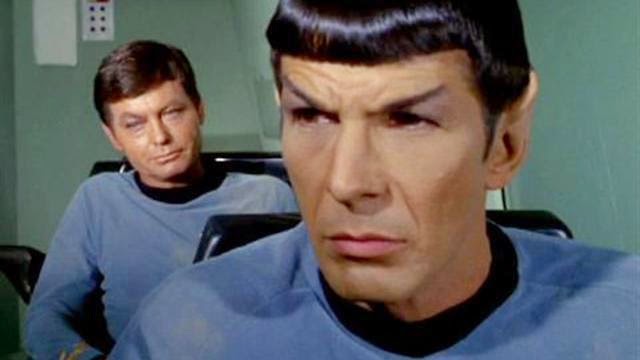 McCoy supported him where others were concerned, but also called on him to be more accountable as only a true friend could.

No red shirt losses, but they lose a couple other colors due to the high quality Starfleet training again.  A giant roaring caveman managed to sneak up on the highly observant Blue and Gold Shirts, disarm one of his phaser with a rock, and kill another using a big pointy stick..

Upon the safe return of the Shuttle crew, Uhura is in full on mooning mode, and laughs the hardest when they all point out his human side.

“Oh that pointy eared man of mine!"

I just rewatched G7 today.
Two points
1) As you mentioned, three senior officers aboard the shuttle to study the quasar. Really no explained reason for Scotty and certainly none for McCoy. Ok, popcorn logic, wha'evs

2) more concerning, when the shuttle is lost to ionizion or what-not, the Enterprise races in to the one habitable planet without any kind of scan (they can't) to assure them that they too will get all fried by the radiation.

Also, I love Scotty in this episode and the way Spock has a highly suppressed respect for him that develops throughout the series.

There's only one episode where they seem to show any concern about putting multiple command officers in danger at once. Its in the 2nd season, and gets overridden by circumstances immediately. Safety protocols of any time (crew or ship) are woefully lacking.

Scotty is awesome, and generates respect from the rest of the gang more and more as the series progresses.